Search
Home Arkansas Basketball Around the SEC Auburn Player Predicting Tigers Will “Beat C*ap” out of Hogs in SEC... 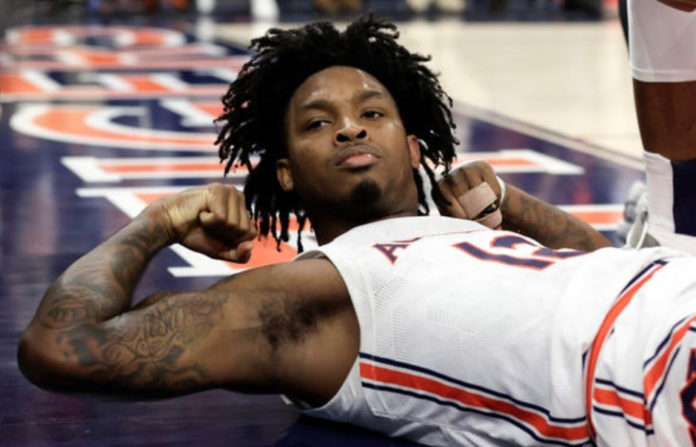 On the surface, there isn’t too much to be salty about if you’re an Auburn basketball follower.

A regular season SEC championship, a No. 1 ranking in the AP poll and a raft of postseason SEC awards would all be cause for much celebration for most SEC programs. As good as Auburn was overall during the regular season, however, the Tigers did lose three of their final eight games to put a slight blemish on things.

The first of those losses, of course, came a month ago in Bud Walton Arena. Even though some CBS writers tried to erase it from the record books, one particular Auburn basketball player can’t quite forget it.

That would be 24-year-old Zep Jasper, who watched from home as the Razorbacks took down then No. 1 Auburn in front of a capacity home crowd. “We would love to get them back, especially Arkansas,” the senior guard said on a recent Locked on Auburn podcast during a discussion of potential SEC Tournament opponents. “Not really Florida, but Arkansas, we would love to get them back… That’s one for sure we would want to play. We just feel like we were disrespected. They feel like they got a win, they feel like they’re better than us right now.”

Most of that is understandable. Jasper wants revenge for Auburn’s first SEC loss of the season. Any competitor can understand that.

But the nation that Auburn basketball was “disrespected” is doubtful at best, downright laughable at worst.

Jasper didn’t go into specifics but said part of it was what he saw at home while cruising the Internet from what I can only imagine was the comfort of his La-Z-Boy recliner. “I just see all the type of stuff on the internet, this and that,” Jasper said, perhaps referring in part to a fun Tommy Foltz special directed at Pearl right on this very site. “I’m a firm believer in my coach. I’m a firm believer in what he do. For him to get disrespect, for him to be mad at what they did, I’m going to be mad, too. I would love to see Arkansas.”

There are a a couple potential issues that Jasper has with Arkansas, as Locked on Razorbacks host John Nabors points out.

2. Eric Musselman taking his shirt off in the ensuing jubilation of the court storming.

No doubt, plenty of Auburn fans rolled their eyes at seeing Musselman go shirtless. They find such antics as going overboard. Which would make sense if your own coach was, say, Mike Krzyzewski. But Bruce Pearl is every bit as guilty of over-exuberance as Musselman.

“Bruce Pearl does the same thing. The dude literally has taken his shirt off in celebration too. So I ain’t buying that either,” Nabors chimes in.

Regardless of what Jasper specifically felt was disrespectful, he should realize that his thin skin makes Auburn look small time.

That is, the true blue bloods expect court storming and much hubbub when they are taken down. “That happens to Kentucky all the time, happens to Duke, North Carolina,” Nabors said. “These big time programs, that type of stuff happens to them all the time. They don’t whine and cry about it and think they got disrespected.”

Speaking directly into the very soul of Auburn basketball, Nabors continues: “You’ve been an absolute and total irrelevant basketball program from pretty much the beginning of time, now that you’re starting to have some little success, you believe that everybody’s out to get you, and that you will not be disrespected.”

What Jasper and the like apparently don’t understand is all that reaction from Arkansas fans and players was actually a good thing and sign of respect. In the same way that Kentucky gets the “best” of the loudest and worst from almost all SEC programs’ fans.

Nabors can’t believe Auburn basketball players and fans would “completely and totally play the victim card, as if everyone’s counting you out and everyone’s doubting you and being disrespectful to you because they storm the court against you when they win, are you that stupid? Do you not know how basketball works?”

Much Respect for Auburn Basketball, Actually

“Get over yourselves, Auburn. It’ll be okay,” Nabors wraps up in the video below. “You’re the best team in the SEC, and honestly, if Arkansas faces you again in the SEC tournament, you’ll probably win. You’re a better team. You’re supposed to win.”

Granted, “Arkansas is a really good team too, but without [injured] Au’Diese Toney especially, you should beat Arkansas. Great, go out and do it, but to act like Arkansas did something so horrific to you, like what did they do? It sounds like you’re just being kind of a whiny little baby about everything. That’s what happens when you’re a program that’s been to 10 NCAA tournaments in your entire program [history].”

Jasper’s pretty optimistic about the Tigers’ chances in a potential Arkansas vs Auburn rematch during the SEC Tournament semifinals in Tampa. “If we play against them, the intensity is going to be high, the energy is going to be flowing, because we feel like we got something to prove against them,” Jasper said on Locked on Auburn. “We feel like we’re going to beat the crap out of them when we see them again because from that coaching staff, their players, their fans, we just didn’t tolerate the disrespect from their state.”

Not everybody agrees with Jasper. Especially 247Sports’ Robbie Weinstein, who predicts a result that will hearten plenty of Hogs fans involved in mobile sports betting in Arkansas: Arkansas will again beat Auburn.

“In SEC play, Auburn went 6-3 on the road versus 9-0 at home. Three of those road wins came by four points or fewer, with one more in overtime,” Weinstein writes.

“Arkansas has been a bit better on the road since its 0-3 start to SEC play. It feels like the Tigers have faded slightly late this season when they are not playing in the friendly confines of newly christened Neville Arena. Arkansas also has the perimeter defense to force Auburn’s somewhat inconsistent guards into mistakes, whether via turnovers or bad shots.”

“The Hogs pull a slight upset here to go 2-0 against Auburn.”

Such a result would more than slightly upset the poor souls who share Jasper’s thin skin.