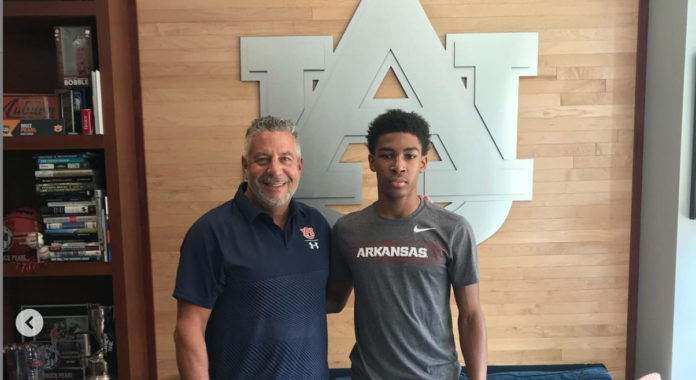 That much became clear in this most recent summer circuit when the younger brother of Arkansas basketball player KK Robinson played up a year on the 15U Arkansas Hawks and shot 48% from the field and 56% from the three-point line during a five-game span.

That he could average 17 points in that span was extraordinary considering he was the first eighth-grader to ever play with the 15 and under team in the 23-year-old history of the Hawks program.

“I’ve never had an eighth-grader play up with the 15s,” Hawks founder Bill Ingram told the Arkansas Democrat-Gazette’s Richard Davenport in July. (At that point, Robinson was considered an eight-grader. He is now a freshman at Episcopal Collegiate School in Little Rock.)

“The level he’s playing on is pretty remarkable for an eighth-grader,” Ingram said. “A lot of people forget he’s in the eighth grade because I’m asking him to do so much from the guard position.”

How much game Robinson has, however, wasn’t as clear until earlier this week.

That’s when, on a visit, he walked into the office of Auburn basketball coach Bruce Pearl with an Arkansas basketball shirt on and essentially walked out with a scholarship offer.

Auburn became the first Division I school to offer Robinson.

On the trip, he also spoke with Auburn assistant coach Wes Flanigan, a Little Rock native and son of old-school legend Al Flanagan, the former Parkview High head basketball coach who could swing a towel around in victory like nobody’s business.

After Robinson’s post, a few Arkansas basketball fans and players congratulated him on getting an offer while also praising him for having the guts to wear the shirt he did.

As did Chance Moore, an Arkansas basketball freshman.

Joseph Pinion, another Razorback freshman, went a step farther with this: “Bro wore an ark shirt to auburn and still walked out w an offer 😂 you tuff for that.”

As did Billy Kavanaugh: “Wearing an Arkansas shirt shirt is savage move. Props.”

Even if Kellen Robinson ends up playing for a different college some day, the audacity of this move (intentional or now) will always endear him to many fans. In the same way a lot of Hog fans think highly of Fayetteville native Mike Conley, Jr. for repping the Arkansas Razorback basketball program, even though he played for Ohio State.

Robinson, for his part, almost certainly didn’t intend for this to be any sign of disrespect or burn against Bruce Pearl. It’s a big deal to get a major scholarship offer at any age, and he more than most young student-athletes would know this.

After all, Robinson has not one, but two, older brothers who have played college basketball.

On top of that, Kellen has another older brother, Khasen, who is a good player for Bryant High School. And he also has a younger brother, Kollin, Richard Davenport reported.

“He’ll probably be the best one out of the family,” Bill Ingram said of Kellen Robinson.

That’s saying something, considering KK Robinson starred for the prestigious Oak Hill Academy and was a 4-star prospect coming out of high school.

A bone fracture in his right foot, however, sidelined KK Robinson for much of this freshman season.

“He tried to play through it, once it came to the forefront that it was really bothering him, he had surgery,” Arkansas basketball coach Eric Musselman recently said.

“It affected him even at the beginning of this off-season when we started our off-season, eight weeks that we get with our guys. At the beginning of it, he really couldn’t go live,” Musselman added in an interview with College Hoops Watch in late July.

“He was held out of a lot of stuff. Now the second part, the last four weeks of our summer program, KK’s done a great job, he’s been able to get out with his teammates.”

“He’s a really good leader. He’s a competent young man and he battled back through a difficult injury and everybody in the building has incredible respect for KK, both his toughness and his on floor leadership.”

Based on the below clips, it does look KK Robinson has gotten a lot of his quickness and bounce back:

Musselman provided some good analysis and updates on a few critical Razorback transfers:

“He played for one of my best friends, Todd Lee at South Dakota. Todd Lee’s an incredible coach, he’s a great X and O coach, he’s extremely disciplined.”

“So Stanley comes from a program that understands a lot of defensive principles that we also have, from a man-to-man perspective. But Stanley’s the guy that can score all over the mid-post. He can score a ball off the bounce of the elbow ISO.”

“He can shoot the three ball with his feet set.:

“He’s a dynamic player who plays as fast from end to end as any player in the country.”

“He’s got to continue to improve as a defender, although we do feel he’s going to be able to jump passing lanes and try to ignite our fast break. He’s another guy that can score when the shot clock is winding down. And you always want players that can do that, that when the plays break, or late shot clock, they can just go one-on-one.”

“He can play the two or the three. If we want to play small ball, he can play the four. He’s a very good offensive rebounder. He jumps passing lanes. He can also be a disciplined defender on the wing for us.”

“So those three guys, those older, veteran players and two of them playing in the ACC, I think is really going to help us.”

Listen to the full interview here:

And learn more about KK Robinson and his family here: