Search
Home Arkansas Football Around the SEC Bryan Harsin’s “Infuriating” Early Failure at Auburn is a 180° from Right... 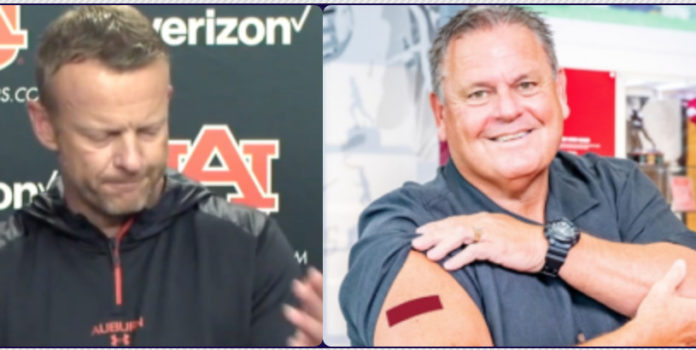 At a recent luncheon, Sam Pittman explained an important tenet of his coaching philosophy: When he sees something go wrong, he doesn’t wait until later to fix it.

“If we got to wait till halftime to make an adjustment on this, then shame on us. We’ve wasted 15, 18 minutes. Let’s get it fixed” now, Pittman said at the first Little Rock Touchdown Club of the 2021 season.

Problem solving is part of the bigger picture of constantly drilling down on the team’s goals, Pittman added.

“Sometimes you have to raise your voice to fix it, and sometimes you got to stop and bring people in and say, ‘Hey, look. What are our goals? Because this is not going to get us there.'”

The biggest goal, of course, is to simply play the game.

There’s no chance at winning without stepping onto the field first.

This basic principle is where Sam Pittman and some other SEC coaches are excelling while first-year Auburn football coach Bryan Harsin is failing.

Bryan Harsin has not been able to coach his team in person since last week because he tested positive for COVID-19. On top of that, he leads one of a few SEC teams that has failed to reach the 85% vaccination rate for avoiding regular COVID-19 testing.

Oh, and while he insists he’s not anti-vaccination, he also refuses to disclose whether he’s been vaccinated or not.

“He refuses to say,” AL.com’s Joseph Goodman writes, “but these are not questions anyone should have to ask of a public figure who is paid millions of dollars to manage a key asset of Auburn University, and set a strong example for the boys he has been entrusted to develop into young men.”

“This is how an ‘Auburn Man’ takes care of the family? Nah.”

“Harsin’s mismanagement of Auburn football is infuriating, but his stubborn neglect for the safety of people he is paid to shepherd into adulthood is unacceptable.”

Look, let’s not pull any punches here: Millions of Arkansas football fans have not gotten vaccinated because they feel that the science behind the vaccines is bogus. But they aren’t the ones who have been put in charge of SEC football players at a public university and given the task of making sure they have every opportunity to excel on and off the field.

Coaches like Nick Saban, Lane Kiffin and Sam Pittman have, and they are excelling where Bryan Harsin is failing.

All three of those coaches are reporting team vaccination rates between 91% and 100%.

No way they are going to let what happened to the North Carolina State baseball team during the 2021 College World Series torpedo their football programs.

Not only that, but Pittman like Saban has been out front and center with public messages to encourage the vaccination.

For instance, he allowed a photo showing his bandaged arm after receiving the shot shown in a University of Arkansas campaign meant to increase the vaccination rate among students through incentives like $500 scholarships and Razorback football passes.

Harsin, meanwhile, has come across as cantankerous when asked about these matters.

For instance, at SEC media days, “he got flippant, almost irritated, when asked how many of his players were vaccinated,” wrote Wally Hall, the Arkansas Democrat-Gazette sports columnist.

“He hemmed and hawed and finally said about 65%, or 20% below the SEC’s 85% threshold just two weeks before practice was set to begin.”

“Apparently there was a good reason Harsin, who has been successful as a coach at Arkansas State University and Boise State, didn’t care to discuss it.”

“Like too many people, he wasn’t concerned about it.”

Auburn Football’s Failure as a Boon for Rest of SEC

Well, he should be concerned about it now.

While other SEC West coaches like Pittman are doing everything they can to give their teams an advantage during fall camp, Bryan Harsin can’t be with his football team after testing positive. He missed the groundbreaking on Saturday for the new Auburn football facility.

“Every day he’s away from the field, he will lose more credibility as an effective leader,” Goodman writes.

Certainly, plenty of Auburn football fans support Harsin’s right to not divulge his vaccination status. They may not think so well of him, though, if this season Auburn has to forfeit a game — or hold out a considerable number of players — because of testing protocols.

While the SEC office hasn’t yet decided if these forfeits will end up counting as losses, recent developments indicate that’s more likely than not.

Consider LSU just became the first SEC team to require all fans at home games this year to show proof of vaccination or proof of a negative test within 72 hours of kickoff.

If LSU is doing this, you can rest assured other schools will announce similar plans soon.

When it comes to Harsin’s intransigence on disclosing his status, plenty of Arkansas football fans join Auburn fans in supporting him.

The more stubborn he remains, the more that will please them in the short run — and possibly in the long run as well.

For now, they can admire Harsin for standing up for his beliefs.

Later, if an outbreak hits the Tigers before the Arkansas vs Auburn game on October 16, they can enjoy what Arkansas would gain from Harsin falling on his sword too.