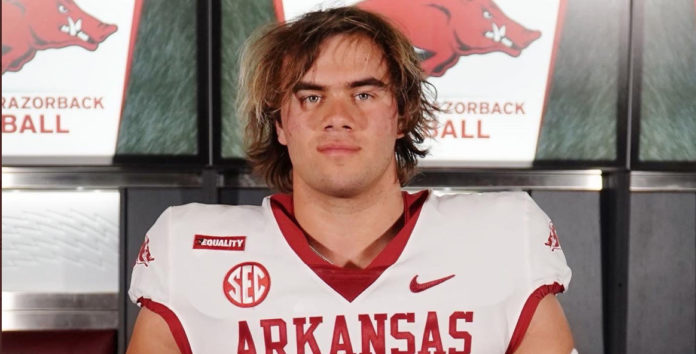 Until the last few months, when it came to the Sooners and Arkansas, the general dynamic over the years has been the former benefiting from the latter. One of the most recent examples is former Hogs receiver Mike Woods transferring to Oklahoma before the 2021 season, a move that did not benefit him individually as much as he would have liked.

But this particular legacy of parasitism goes back a lot longer. In the mid 1960s, the Sooners hired Jim Mackenzie, Frank Broyles’ longtime assistant at Arkansas, to be their next head coach.

On Mackenzie’s Sooners staff was Larry Lacewell, the Fordyce, Ark. native who later would be the head coach at Arkansas State and Barry Switzer, the Crossett, Ark. native who would later become a Sooners head coach. It was Switzer who in 1984-85 signed four of Arkansas’ top prep players in Keith Jackson of Little Rock, Mark Hutson of Fort Smith, along with Eric Mitchel and Curtice Williams of Pine Bluff.

Many Arkansas fans were displeased with the Sooners coming into their backyard and taking the best the state had to offer.

Given the kind of hatred Mitchel received, it’s a wonder he was on board with his son, Tevin Mitchel, becoming a Razorback decades later. But he understood that a few deranged fans don’t speak for the majority, which is something Oklahoma fans should keep in mind as some melt down in recognition of a tide between the programs that is starting to shift and Arkansas leapfrogs the Sooners in national recruiting rankings.

Sam Pittman, an Oklahoma native and former Sooners assistant, is making recruiting inroads in Oklahoma in ways that are unprecedented for Arkansas football coaches. In back to back years, he signed top 3 recruits out of the state in Myles Slusher and AJ Green.

This offseason, Pittman got the Sooners’ leading receiver in 2021, Jadon Haselwood, out of the transfer portal as a crown jewel in what is rounding out to be one of the nation’s best transfer classes. But Pittman’s most impressive recruiting feat in Oklahoma yet happened on Saturday night.

Luke Hasz, the state of Oklahoma’s No. 1 recruit in the class of 2023 according to 247Sports’ composite score, Tweeted his commitment to the Razorbacks over offers from he likes of LSU, Ohio State, Ole Miss, Oregon, Penn State, Texas and USC:

Speaking of threes, Hasz’s commitment also propels Arkansas football to No. 3 in the Rivals national recruiting rankings for the class of 2023:

And No. 4 in the 247Sports national recruiting rankings:

Reaching No. 3 in national recruiting rankings at any point of the process is very rarified air for the Arkansas football program. This is almost certainly the highest Arkansas has been ranked in the modern recruiting era. Granted, this is very early, and it’s telling Alabama isn’t even listed in the top 25 yet because of how few recruits from which they accept commitments this early. In the coming months, expect the likes of Texas Tech and Penn State to slide and the likes of Texas A&M, LSU and Alabama to rise.

But that’s OK for Arkansas, because before it regularly finishes with top 5 ranked classes, it must first spend more time at these lofty altitudes in the early and middle stages of the process.

Hasz’s announcement causing some Sooners fans to lose it online, given Hasz had been committed to Oklahoma until the point where former Sooners head coach Lincoln Riley decided to high tail it to USC. They are now lamented that so many of their state’s best players are leaving the state, just as was the case at Arkansas in the last years of Bret Bielema and during the Chad Morris debacle.

“They would make you a instant star at OU,” Steve “Sour grapes” Waldo Tweeted at Hasz. “You would be the top TE going into the NFL. You will never get that at Arkansas. The best is 7th or 8th in SEC. BOOMER!!! (Apparently, Waldo has never heard of Hunter Henry.)

Then there’s the below Tweet sent out a few days ago after Hasz tipped his hand:

This kind of talk smacks of the kinds of charges that Razorback fans were hurling Oklahoma’s way in the mid 1980s. “They said I was bought by OU and that OU got my parents jobs,” Fort Smith native Mark Hutson told The Oklahoman. “People in Arkansas have this thing about Oklahoma. They know Oklahoma’s better, so they say Oklahoma buys players because they have to come up with some kind of excuse.”

My, how the tables have turned. Now that Bixby native Luke Hasz has signed with Arkansas, you will start to hear the inverse of what happened in the mid 1980s. Arkansas, for the first time in the modern recruiting era, will have taken away the No. 1 player in their state — an elite tight end that Oklahoma very much wanted.

Getting Hasz takes Arkansas out of the realm of potential border rival and makes the Razorbacks an actual rival, even before Oklahoma officially joins the SEC. It is the latest signal that the Razorbacks are building the foundation to be an elite program that will consistently cause the Sooners problems on the recruiting trail and on the field.

“Think about where they are relative to where you thought they were coming into this past year,” college football analyst Josh Pate said.

“And not only that, that 9 and 4 record was compiled as they played both participants in the National Championship game. That 9 and 4 is good for about a 1 loss playoff berth in some other conferences. Arkansas’s really good this year. And it’s only a tip of the iceberg thing relative to what many people around that program think they could become.”

Most years, the state of Oklahoma produces one to three top 100 type players. They usually go to the Sooners, Longhorns or a nationally known program. Until Hasz (no. 59 nationally), future Razorbacks out of Oklahoma have not been top 100, as you can see in the 247Sports composite rankings below.

Boldface is the No. 1 player in the state for year listed.

*Felix Jones was the No. 4 Oklahoma football recruit this year.  He was ranked No. 179 overall in the nation with a grade of .9000 (four stars).

*Future Heisman Trophy winner Sam Bradford was also the No. 4 Oklahoma football recruit this year. He was ranked No. 307 overall in the nation with a grade of .8778 (three stars).

Defensive tackle Calvin Barnett committed to Arkansas out of Booker T. Washington High in Tulsa. He was the state’s No. 4 prospect and No. 185 nationally. His score was .9224 (four stars).

Wide receiver Keon Hatcher signed with Arkansas out of Owasso High. He was the state’s No. 4 prospect and No. 285 nationally. His score was .9046 (four stars).

*No player ranked in the top 100 nationally

Before the modern recruiting rankings, a couple of highly regarded recruits that Arkansas got out of Oklahoma including Harry “Light Horse” Jones and Quinn Grovey.

Hasz’s sister, Jenna, graduated from Arkansas last semester,” the Arkansas Democrat-Gazette’s Richard Davenport reported. “His aunt, Jennifer Rouse, also is a graduate of the UA. He accompanied his mother, Stacy — who has season tickets for football — to Razorback games last year.”

“She went to Tulsa, but she’s always liked Arkansas,” Hasz said of his mother. “My aunt decided to go there, and my sister took a bunch of visits down there and wanted to go there, too.”