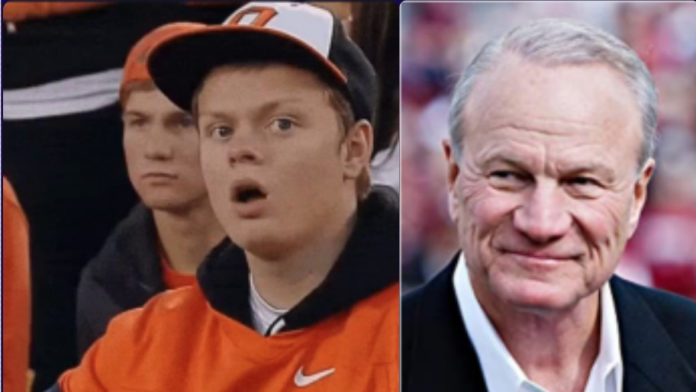 On Monday, Oklahoma State football coach Mike Gundy tried to put about as positive spin as is imaginable on the fact that the Big 12’s two biggest programs are leaving his conference high and dry for greener pastures in the SEC.

First, he acknowledged what everybody already knows about the motives behind the recent news that Oklahoma and Texas are, pending some crazies in the Texas legislature, SEC-bound.

“We can cut this any way we want and say anything we need to say, but essentially it comes down to television revenue, the dollars, and they’re looking to football to see what football has to offer,” Gundy said during before his Oklahoma Sports Hall of Fame induction.

But then he put on the rose-colored glasses.

“We have an unbelievable product to sell,” he said of the Oklahoma State football program. “We’re a fun team to watch. We’ve had tremendous success, we have a lot of stability with the head coach that’s been there 17 years.”

You may want to pump the brakes a bit there, Mike.

Barry Switzer, the former Razorback and Sooners head coach, would disagree that everything is going be hunky-dory for the Pokes.

Oklahoma State football has achieved a consistency that Razorback fans can only be jealous of.

The Cowboys have 15 straight winning seasons with a bowl appearance at the end of each year. In the the FBS, only Oklahoma and Wisconsin have more consecutive winning seasons.

Strong recruiting out of Texas and of course Oklahoma has helped to fuel this run of success.

Consider that four of Oklahoma State’s 13 commits so far in the class of 2022, ranked No. 28 nationally by 247Sports, are from Texas.

Switzer, however, believes that in the coming years a few of the most talented Texans who would have gone to Oklahoma State in the past will go to Arkansas instead.

That’s because the luster of playing for the Big 12, where they could have squared off against sportsbook favorites like Texas and Oklahoma, has taken a huge hit and left the conference as a lame duck.

While Texas’ most elite players will continue to go to Texas and Oklahoma, Arkansas should benefit because “there are lots of good players left and Arkansas has won with those good players before and will again,” Switzer said in a recent interview.

On top of that, Switzer sees the same dynamic will play out with some of the 3-star talent coming out of Oklahoma.

Just this past weekend, we see a talented 3-star Texan linebacker in Jordan Crook announce that he was flipping from OSU to Arkansas.

While Crook says he was leaning toward flipping as early as June, well before the news of Oklahoma and Texas to the SEC broke, it’s possible this flip is a sign of things to come.

Because, as Switzer sees it, almost any losses involving the Oklahoma State football program are Arkansas’ gain in the new SEC.

“It does hurt Oklahoma State a hell of a lot. And that helps Arkansas,” he told Clay Henry.

The expanded SEC brings a lot of potential negatives for Arkansas football program. But on the plus side, the extra dollars that will flood into the pockets of SEC teams — especially those in the west like Arkansas – could accelerate recruiting disparities between Big 12 schools and SEC schools in the future.

“The money that you bring in, $30 to $40 extra million dollars, it’s going to help your program in huge ways, and one of them is that you continue to be able to fund budgets,” Henry said on the “Morning Rush.”

“With COVID, we don’t know what kind of seeding we’re going to have and what kind of revenue is going to come in, but that kind of money is going to enable you to say, in confidence, ‘Our national recruiting budget is [essentially] unlimited.'”

Oklahoma State has its longtime rival Oklahoma to thank for putting it in the the conference realignment mess it’s about to be in.

The Sooners sprung the news on Oklahoma State late in the game. “They know all of this was going on behind their backs for months,” Switzer said of the Cowboys. But Oklahoma didn’t have the decency to inform the the same in-state program with which they share so many tax dollars.

While OSU looks like it will be a loser in all this, Arkansas and Oklahoma are winners.

Still, Switzer points out the competition just go stiffer for both programs. While “Oklahoma has dominated the Big 12, let’s find out if they can do that in the SEC. I don’t see it.”

Oklahoma State Football and the Future of the Big 12

The future of the Big 12 conference is very much in doubt.

The Cowboys could land in a number of places since they are an attractive program. According to 2018 Wall Street Journal numbers, the Oklahoma State football program has the fourth highest value (No. 30 overall) in the Big 12, only behind Texas (No. 1) and Oklahoma (No. 7) and Kansas State (No. 29).

Here’s a breakdown of possible landing spots, according to Embrace the Grind Sports.

“Joining the Pac-12 would give the Cowgirls the opportunity to regularly play teams like UCLA, Oregon, Washington, and Arizona who has struck gold a few times as well. The bigger winners here is the Pac-12 Conference as they would be entering the school that would help bolster their basketball and football resumes, as well as helping to attract Texas Big 12 teams, Pac-12 as well.”

“The Pac-12 doesn’t have much to offer that can improve Oklahoma State’s current situation other than softball.”

More about this potential merger, which has already been discussed by the two conferences, here:

“The school’s president has come out and stated how disappointed they are in Oklahoma for leaving the conference, and how the two schools have had a long history of working together to do what was best for the state…. It also took out Oklahoma State’s biggest rivalry, which was the Bedlam Series they had with the Sooners.”

“Keeping the conference alive, give them the opportunity to pull a Tulsa, one of the two other Division I colleges from Oklahoma to create a new rivalry. It would also make the most geographical sense as it would allow for the conference filled with schools mostly from Kansas, Oklahoma, and Texas. This would keep the basketball competition high, but it would take a hit on the football side of the conference.”

“At the end of the day, if teams like Iowa State and Kansas already want to leave for the Big Ten, then they will have to rely on enough American Athletic Conference teams wanting to leave to join the power conference.”

OSU to the Big Ten

“It seems like an all around great option for the Cowboys. They have one of the best basketball conferences in the nation and have at least four football teams that are constantly talked about on the national stage. They also have strong teams in the most of the non-breadwinning sports as well.”

“They also have a wrestling team, which is one of the sports that every single member school of the Big Ten has. The downside to joining the Big Ten would be the fact that Oklahoma State is not an AAU-affiliated school, which the Big Ten takes pride in having schools being a part of that association.”

“And it isn’t as geographically relevant as trying to revive the Big 12 would be. With schools like Michigan, Ohio State, and Wisconsin that are typically dominant in both football, basketball, as well as plenty of other schools being great at one or the other, Oklahoma State would fit right in competition-wise in the Big Ten.”