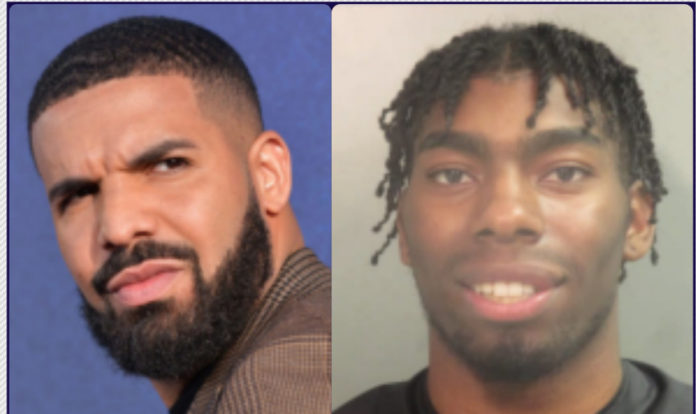 Before today, one of Kamani Johnson’s most famous moments was falling asleep at a restaurant table in L.A. as a younger teen.

In the party was Johnson’s older brother Dakari, a former Kentucky basketball player, and hip hop star Drake, a Canadian who decided it was in his best business interests to “love” the Kentucky Wildcats.

Drake, as Drake does, decided to make light of the situation by getting a pic with the dozing Kamani Johnson.

Since then, however, the 6’7″ Kamani has taken on a predisposition that’s far from sleepy.

He established himself at UALR as one of the strongest, most intense rebounder in the Sun Belt Conference before joining the Arkansas basketball program this past season.

Johnson, a Brooklyn native, was on the way to becoming an important inside player for the 2021-2022 Hogs as he came off a season-high 15-point effort versus Elon.

That continued upward trajectory may be in doubt now. On Wednesday, shortly before the Hogs were beaten at Mississippi State, Johnson Tweeted this apology to Arkansas basketball fans:

Arkansas head coach Eric Musselman around the same time announced that Johnson has been indefinitely suspended from the men’s basketball program. Details are forthcoming, but this does fall in line with a disturbing pattern:

In June, Johnson was arrested in downtown Fayetteville on a charge of disorderly conduct just before midnight.

As reported by Pig Trail Nation, the incident occurred when multiple people were fighting and blocking the roadway near Dickson Street and North School Avenue.

“Officers made contact with Johnson who was instigating and agitating the crowd. When officers attempted to separate Johnson from the crowd, he attempted to strike an officer.”

Several people attempted to escort Johnson away from the incident to avoid arrest but to no avail.

Johnson continued to move east while yelling and antagonizing the crowd and blocking the roadway.

That’s pretty troubling as it is.

Things only get worse, according to the police report, after that.

Johnson, in an attempt to separate him from the crowd, tried to strike an officer.

“He was detained and police tried to deescalate the situation,” according to Hawgbeat.com. “That initially calmed him, according to the report, but as he was escorted away from the incident, he continued yelling.”

“According to the report, he continued to block the road, antagonize others in the crowd and try to fight people while ignoring verbal commands from the police, which led to him being placed him under arrest.”

But Johnson refused to place his hands behind his back.

He held on to a nearby light pole “for stability to prevent arrest,” with his resistance resulting in injury to officers, according to the report.

Officers were eventually able to handcuff him and take him to Washington County detention center. He got out on $265 bail on Thursday morning, with a court date set for June 15.

We have been made aware of the incident involving Kamani Johnson,” Arkansas basketball coach Eric Musselman said in a statement.

“We are in the process of gathering more information from the proper authorities. His status with the team will be determined once we have made a thorough review of the information.”

Fighting police is pretty serious. If Johnson is kicked off the team, the Arkansas basketball program is a little deeper thanks to Trey Wade.

Also in June 2021, Musselman signed the 6’6″, 220 pound Trey Wade, a two-year starter at Wichita State after playing a season-each at UTEP and South Plains (Texas) Junior College. He appeared in 52 games with 47 starts for the Shockers and averaged 7.1 points and 5.5 rebounds for his career.

“We’re very excited to welcome Trey Wade for the Arkansas Razorbacks,” Musselman said. “He brings a tremendous amount of experience, he has played in the NCAA postseason and he is very versatile.”

“He plays extremely hard on both ends of the floor and will be an excellent addition to the program.”

These are the kinds of attributes Johnson was looking forward to bringing to the team as well.

In a May interview with Zach Schumaker, he said he will “bring toughness, heart, a will to win — I’m a big winner. Versatility, rebounding, getting to the foul line.”

When Schumaker ask Johnson what single word best describes him, he had to ponder it for a couple moments.

He settled on “active,” adding “If you’re in Fayetteville, you’ll always see me somewhere doing something.”

As far as his goals as a Razorback, Johnson added he’s looking forward to winning an SEC Championship and make a deep run in March Madness.

“Hopefully be a player they can be proud of. That’s one of my goals for sure.”

Every summer, it seems, there are a few arrests of student-athletes.

That, of course, isn’t just at Arkansas but across the nation.

Usually, they involve intoxication and/or disorderly conduct. Arkansas baseball player Brayden Webb, for instance, was arrested in late May because he wanted some hot dogs way too badly.

Reportedly, he cut in the line at a hot dog stand on Dickson Street and after he was refused service, he pushed a table toward one of the stand’s workers and broke a mobile credit card reader slamming it to the ground.

It appears Webb was drunk.

The report states that a worker struck Webb and restrained him until police arrived, and that Webb had bloodshot eyes and slurred speech.

Webb has since rejoined the team.

Johnson, meanwhile, is alleged to have struck police officers — which does make his situation worse serious than Webb’s.

It’s important to note that Johnson didn’t appear to be some malcontent or “thug” heading into Wednesday night.

For instance, here’s an image he posted earlier that same day from an Arkansas basketball camp:

It’s possible that the police report doesn’t exactly align with what happened.

That’s a point Arkansas basketball reporter Kevin McPherson brought up on Hogville: “In this age of on-site, real-time video from cell phones & police body-cams we often SEE something very different from what police reports detail to justify arrests, including assaulting officers.”

“My belief is police get it right MOST of the time, but certainly not 100% of the time, thus my point being that I will not to rush to judgment.”

How often do police get it wrong?

Criminologist Philip Stinson studied 10,000 officer arrest cases, involving nonfederal sworn law enforcement officers who had been charged with at least one crime from 2005 to 2014.

One reason is “noble cause corruption,” where “officers might lie in police reports to justify an action they took, whether the use of force or a questionable arrest.”

“Police are often operating under the mindset that they are keeping communities safe or getting criminals off the streets. So when they lie, the idea is that the ends justify the means — that their actions were ultimately for a good cause.”

We don’t yet know what really happened in the case of Johnson.

As another reminder of how small Arkansas is, there’s a tie between this situation and the most popular Razorback in the world right now: pitcher Kevin Kopps.

Kopps’ roommate, Sean O’Neill, is an actual cop in the Fayetteville Police Department.

“Kopps living with a cop is kind of funny,” O’Neill said.

“Especially with his walk out the past four years being Bad Boys.”

O’Neill is a former bullpen catcher for the Hogs who first met Kevin when both were on the team in 2018. It hasn’t been reported that he was involved with the arrest of Johnson.

What’s up with Kamani Johnson and Drake?

In the below interview with Schumaker, Johnson tells the story of his ties to Drake through his older brother Dakari Johnson (8:30).

He says he considers Drake to be “like family.”

28:30: On why he chose to play for Arkansas basketball

29:55: About practicing with the Razorbacks this past spring

“I think Devo’s a pro, and I think he’ll be one of the best college basketball players next year. I’ll go to war with him any day. And he knows he can go to war with me any day, too.”

32:20: On what to expect from Arkansas basketball next year