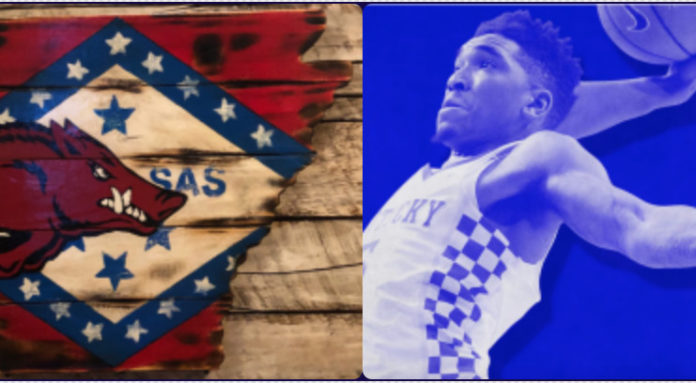 I wasn’t blessed with nearly enough athletic ability to find the plight of someone like Malik Monk fathomable.

Most message board honchos in Arkansas didn’t either. That didn’t stop a great many from bellowing from the tallest points in the Ozarks when Malik Monk, arguably the highest-rated homegrown prospect in a generation, committed to Kentucky just over six years ago.

I’m an Arkansas lifer, middle-aged and jaded, and I remember the fallout of the Eric Mitchel and Keith Jackson defections of the 1980s. Monk played a different sport, but had the same quandary over a generation later: “How do I politely tell my home state, ‘Thanks, but no’?”

Monk, the Lepanto-cum-Bentonville product, wasn’t perfect in his handling of his 2014-16 recruitment, commitment, and departure from the state of Arkansas. He was also a teenage fish, tossed into a bowl by adults who largely thought and sometimes acted childishly.

He never owed the University of Arkansas anything. His one year as a Kentucky Wildcat served the career path he set for himself. Now he plays alongside LeBron James with the Lakers in a basketball and cultural mecca.

Maybe now, accordingly, is a fine time for me to apologize, and if other Razorback fans feel compelled to join along, feel welcome. We’re sorry, Malik, and in an ironic twist, grateful to you.

After all, Monk’s rebuffing of Arkansas signaled something about Arkansas basketball, the quiet part that needed to finally be said aloud: At the time of Monk’s departure to Kentucky, it was no longer the crown jewel of state sports.

When Monk followed through on his long-feared pledge to John Calipari in November 2015, Arkansas football looked somewhat reborn under Bret Bielema after exciting road wins against Ole Miss and LSU. A few months before that, the Arkansas baseball team just completed its fourth run to Omaha under Dave Van Horn, and Andrew Benintendi earned the program’s first Golden Spikes award.

Basketball, you ask? Well, Mike Anderson’s 2014-15 team had been his most accomplished to date. Thanks to Bobby Portis staying put for two excellent seasons, the Hogs sprang back into the NCAA tourney that spring and won 27 games.

Arkansas fans felt, for the most part, that Anderson’s performance had been fine, if a shade underwhelming. At a minimum, though, it seemed sensible that Malik Monk would do as Portis did, and stay in state.

The fact that Malik’s older brother made minor history as a Razorback himself didn’t hurt. Marcus Monk had lettered four years in football and contributed on multiple occasions on the basketball court. He shined as an All-SEC freshman wideout, culminating his stay as the school’s all-time receiving touchdown leader with 27. He kept his mouth shut, made excellent grades, and represented the athletic program gracefully and well.

Then, while working toward an MBA back at the UA, he involved himself in Malik’s recruitment – the extent of that still remains hard to figure. As Malik soared up the recruiting rankings, and the ensuing NBA Draft’s board, Marcus’s role clearly grew.

Malik Monk’s Growth Should Mirror Ours

Malik’s transition from Northeast to Northwest Arkansas for high school basketball career fueled speculation for sure. Marcus is 12 years Malik’s senior, and his involvement in all this transition would seem to bode well, right?

It turns out, a former Hog two-sport standout with multiple degrees from the University can, did, and should exercise some freedom. For that matter, Malik Monk earned the right to make his choice.

His senior year at Bentonville was predictably excellent. The 6-3 guard scored nearly 29 per game, then after committing to Kentucky, seemed totally at ease with that jump, too. Monk won SEC Freshman and Player of the Year in 2016-17, his only collegiate season. The Razorbacks, meanwhile, won 26 games and nearly knocked off eventual national champ North Carolina in the Round of 32.

Anderson, though, didn’t sustain any alleged momentum. The next season, his team underperformed and lost to Butler in the opening game of the tourney. In 2018-19, the Hogs barely mustered an NIT bid, and Anderson’s tenure ended politely but definitively.

As Hunter Yurachek handed the reins over to Eric Musselman, Monk’s defection stood as a flashpoint of the prior era. He was a big fish, and Anderson did not catch him.

Marcus, though demonized on message boards and on the periphery of Arkansas media, didn’t say anything untoward. Malik never took shots at the university, its then-coach, or the program at all.

The decision, though, didn’t go without ample scrutiny and fair questions about entitlement. Monk’s inauspicious pro beginnings (a substance-related suspension and pedestrian numbers for two years in Charlotte) probably pleased some Hog fans who relish grudges.

Malik Monk grew from the struggles, though. His 2020-21 season represented career bests across the board (11.7 ppg, 40% three-point shooting), and that earned him a chance in Los Angeles with a contender as a reserve gunner.

He fared better, clearly, than another Arkansas product who also bypassed the beloved state program for bluegrass. Archie Goodwin spurned the Hogs for a single, inconsistent year under Calipari (2013-14). The Sylvan Hills guard never got untracked in Phoenix or elsewhere and is now 27 and presumably finished with the NBA. There’s no sense in demonizing him or taunting him, either.

Arkansas athletes occasionally want out, and it’s okay. Monk’s been an unquestioned bright, youthful element on an aging Lakers team, and has played inspired ball for a middling team, scoring around 10 points a game putting up with Russell Westbrook.

Regardless of how his NBA journey unfolds, though, he found blue grass to be a greener pasture for a moment in time. Just like it was for Mike Conley, Jr., who despite an Arkansas legend of a father and plenty of Razorback ties still chose Ohio State over the Hogs. Arkansas basketball fans hopefully can appreciate and respect these kind of decisions now that their own program is thriving.

Nowadays, losing out on a “big fish” like Kel’el Ware (who chose Oregon over Arkansas) doesn’t hurt nearly as bad when Musselman is getting so many other Top 50 players to come Arkansas’ way.

Speaking of those who left Arkansas, see our latest here: