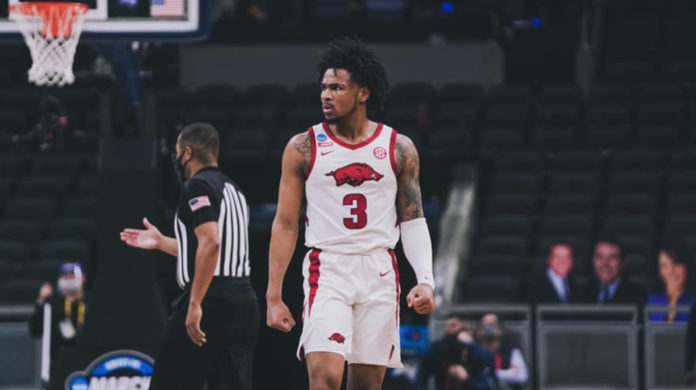 Over the last three seasons, Arkansas fans have nearly unanimously praised the fight and tenacity of Desi Sills.

Few players in modern Arkansas basketball history have so clearly embodied the quintessential traits of what a Razorback ought to be. For the longest time, it seemed Sills was destined for great things in a Hogs uniform.

In his freshman season, Sills came off the bench to shoot 46% from three-point range (a program record) and delivered thunderbolts of energy.

In a thrilling one-point road win against No. 19 LSU, Sills delivered one of the most impressive effort plays of his career.

On a breakaway dunk attempt by LSU’s Skyler Mays Sills skied to block the shot at the rim, then twisted mid air and fell hard against the stanchion.

He laid there for a minute or two, grimacing, but eventually was able to limp off.

“I am just in awe at the effort of the Arkansas Razorbacks,” ESPN color commentator Dane Bradshaw said afterward.

“These are freshmen you’re seeing laying it all on the line. Usually, they say ‘I’m not gonna get on a poster. I’m not gonna take a chance there.’”

This is the Desi Sills so many Razorback fans will remember.

Driving to the basket with fearlessness. Nailing threes with gusto. Lifting the team on his back and carrying them to a crucial Auburn win this season that stopped the worst stretch of Eric Musselman’s college career and sparked the longest SEC winning streak in Arkansas basketball history:

“He played like a fighting Razorback,” Clay Henry said on Hit That Line. “And if there was a loose ball, you could guarantee Desi was going to go on the floor to get it, and he fought his guts out.”

Sills injured his left shoulder against Mississippi State a few games after the Auburn win and didn’t come back the same. His shot was off. Besides the South Carolina game, Sills never shot above 50% in a game as a Razorback again.

He went from taking seven or more shots per game to just around two per game.

He couldn’t have been happy with his plummeting minutes, which likely was all the more aggravating since another small guard in KK Robinson was out for the season.

Still, it was a natural result of Devo Davis’ rise to the brink of stardom and Musselman’s shortening of the rotation down the season stretch. Minutes could even be harder to come by next season with the return of KK Robinson, expanded roles for Davis and JD Notae, as well as the arrival of bluechip freshman Chance Moore and any small guards who transfer in.

As a result of all this, Sills’ dreams of becoming an All-SEC Razorback player like Mason Jones essentially vanished.

But Sills, unlike Rakeem Boyd, never quit on his team during the season.

He never stopped fighting and giving his all, especially when his team needed him again against Oral Roberts and Baylor in the NCAA Tournament (Sills’ minutes jumped back up to sophomore to nearly 30 a game in those games, just as they had been in his sophomore season.)

That shouldn’t be forgotten in the ugly aftermath of Sills’ recent decision to transfer away from the program.

In his announcement on Facebook, things kicked off normally enough.

“Dear Razorback nation, I would like to start off by thanking you all for these last three years,” he wrote.

“I am grateful for all the things my teammates and I were able to accomplish and the memories we were able to make in this year of uncertainty & thanks for pushing me everyday in practice to make me a better player.”

“I would like to thanks Coach Anderson staff for recruiting me & Coach Musselman for allowing me the continue to play for my home state. It has truly been a pleasure to play at Bud Walton Arena,” he added before thanking his family.

Sills, however, didn’t want to just leave it at that.

On Instagram, he added: “I’m going somewhere I can be Desi Sills and not be (held) back! That’s that on that. I’m a certified (bucket), y’all will see in the near future.”

Sills averaged more than 10 points a game last year. Nobody should ever doubt he’s “bucket,” although the “certified” designation is still in question.

All the same, it’s understandable if he wants to play somewhere else where he can be more of a consistent focal point on offense. Hopefully, his shoulder will fully heal and he can set the world on fire.

It is painful to see such a beloved player leave after three seasons and feeling like he’s truly one of the family, but what really hurt some Razorback fans is what Sills posted the next day on Twitter:

Most Of Y’all Not Even Proud Of Me, Y’all Just Surprised I Came This Far. I could care less what people think about me, people barely love themselves.💯

He’s done enough in three seasons in Fayetteville, helping play a role in so many of the bright spots of Mike Anderson’s last season and then laying the foundation for this new era, that most fans appreciate his passion and effort.

Whenever a player has a dry spell shooting from the field, or does something like decides to jump early to the NBA or transfer, there will be always be a few trolls. Even Moses Moody, who is as mature as they come, got heat from some fans because he had a couple bad shooting performances in the NCAA Tournament.

Sills was almost certainly getting a hard time from some fans right after his announcement and he felt like enough was enough. So he spouted off.

As a result, a lot of fans showed him love, insisting they had always loved and appreciated him.

But, predictably, such strong words also drew its fair share of critics. Here’s one:

Lol… cmon bro… just delete your account already. 99% of Arkansas fans have supported you every step of the journey. You’re starting to look like a little kid with all these attention whoring / passive aggressive posts. Go and do you. Don’t tell us. Show us.

“Attention whoring” is going way too far, but it’s fair to think Sills is looking for attention and validation from the masses here despite his insistence that “I could care less what people think about me.”

It’s doubtful this is 100% true if Sills loves the idea of a playing a game at centerstage in front of tens of thousands of spectators. Most big-time college basketball players don’t just feed off the far-off possibility of NBA dollars. They feed off the energy and passion of the masses cheering for or against them.

But here’s the thing: Sills has every right to seek positive attention and validation as he leaves the state’s top program after three seasons. If that annoys some fans, then they need to let it go.

Sills is the one who has hardly spoken his own mind these last few months, and has barely posted to Twitter and Instagram during the Hogs’ big run.

It shouldn’t be on Sills to shut up and ship out quietly in the night.

Sure, maybe when feeling especially chippy, he did something he probably later regretted: 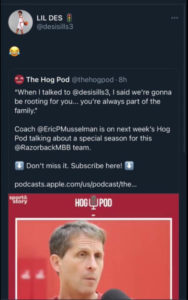 But Sills should get a pass on all this. He deserves the benefit of the doubt after putting it on the line on the line for the Razorback basketball team, over and over again.

Razorback fans always thought highly of Sills’ bravado and choppiness on the basketball court when he was wearing the Arkansas jersey.

They shouldn’t think less of Sills because, when he takes off that jersey for the last time, he attacks the day with the same qualities that made him so memorable.

The Latest on Moses Moody

Despite Moody’s two bad shooting games in the NCAA Tournament, Sam Vecenie puts him at No. 7 in his latest mock draft.

He writes that that Moody had established himself as the best freshman wing in a class that was full of freshman wing stars/potential stars like Cam Thomas, Keon Johnson and Jaden Springer.

Vecenie acknowledges that Moody’s evaluation is also hurt by evaluators who think Moody’s “lack of true burst athletically will end up causing him issues.”

But then he provides the two reasons why he has kept him so high:

Assuming Moody leaves for the draft, below is what the Arkansas basketball roster would look like in 2021-2022:

The 2020-2021 Arkansas Razorbacks reached across generations to deliver something powerful and lasting to the fans who remember.