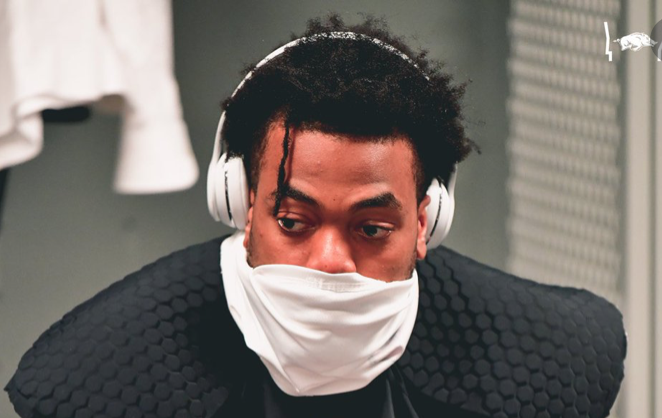 It wasn’t supposed to end like it did for Rakeem Boyd.

Heading into this season, the Arkansas football running back’s career had been on a steep incline ever since he left Texas A&M because of bad grades. For three years in a row, from 2017 to 2019, it seemed Boyd got better and better as he tore through defenses from JUCO to the SEC.

He did the No. 5 he wore proud at Arkansas, to the point where the number’s standard bearer, Darren McFadden, said he wanted No. 5 to be retired here at Arkansas — but only after Boyd wrote the last chapter in its long and illustrious history.

In the summer of 2020, Boyd was the Hogs’ most celebrated returning player. The senior had chosen to return for one more season under new coach Sam Pittman. No doubt, he assumed he’d be the featured back just as he had been in 2018 and 2019.

Boyd, feeling stronger and faster than ever, even mentioned he was aiming to achieve the greatest single rushing season in Hogs history.

In 2020, Boyd surprisingly ended his Razorback career not with a bang but a whimper. He produced one good game, and ran for a smidgen over 300 yards while netting 3.8 yards per carry — down from his average of over 6 yards a carry in 2018 and 2019. Junior Trelon Smith overtook him as the team’s best back.

On December 1, Boyd decided to peace out with only two games left in Arkansas’ season.

Just like that, he hit the exit door with the kind of suddenness he’d seldom flashed on the field this fall. His sudden departure left some fans reeling, feeling like he had quit on the Razorback football program.

I wrote: “Sure, if you’re feeling hospitable, you can call this ‘opting out.’ But ‘opting out’ is something you do near the start of the season, when you’ve weighed all the pros and cons of playing in a pandemic, and decided you’d rather avoid the very present dangers instead of risking it.”

Rakeem Boyd Gives His Side

On Wednesday, however, Boyd spoke publicly about his reasoning for the first time.

Talking to the media after the Hogs’ annual Pro Day, he explained the injuries he had played through during most of the season. He insisted there was “no bad blood” between him, his former teammates and former coaches.

He said he never fully recovered from a bone bruise injury in Week 2 against Ole Miss, even though he played in a few games after that point.

“I was dinged up the whole season, just trying to be a tough ass and get out there,” Boyd said.

“Then after that my roommate got COVID, I didn’t have COVID, but I had to miss games. I wasn’t too fired up about that (and) that’s when I decided ‘Hey, let’s go get ready for the pros.

Is it really “wasting time” to fulfill your duties as a team captain?

I don’t think “opting out” is the right phrase when you’ve already very publicly opted in by accepting one of four team captaincies.

While Boyd stepping away from his captaincy bothers me, I also believe see Boyd’s side of it. He had legit reasons to step away.

The New Orleans native had already deferred the NFL by one year, so from a financial standpoint it made sense to do everything he could to preserve his body in preparation for the 2021 NFL Draft. His family needs the income he can bring in.

“We were struggling, didn’t have much coming to Houston,” Boyd said. “Kind of started back over again, started life over again. No car, no anything. My mom had to really get it as a single parent, so it was tough.”

“I think that’s what made me who I am today.”

So he had a lot to lose in risking serious injury by playing against stout run defenses of the Hogs’ next two opponents — Missouri and Alabama.

Still, it hurt him to see Arkansas lose a close one to Missouri and get blown away by Bama.

“It was tough because I built a relationship with guys on that team that will never be broken,” Boyd said. “It was hard on me like, ‘Dang man, I should be out there with them,’ (but) you also say, ‘I’ve got these problems going on.’”

“It’s your family or (teammates), and you’ve got to pick one. You can’t pick two.”

Let’s still call it like it is — Boyd quit.

The rub here is that quitting isn’t always the wrong thing to do. Sometimes, in the right circumstances, it’s justified. Just look at former Razorback Daniel Gafford, who chose to return to the Arkansas basketball program after a stellar freshman year in which he was projected to be a first round pick had he left for the NBA.

Instead, Gafford chose to play an “extra” year, which was great for Hog fans but bad for his draft stock (he ended up as a second rounder). At the end of that sophomore season, Gafford opted out of playing in the Razorbacks’ run in the NIT to instead prepare for the NBA Draft. Nine of out of 10 Hog fans supported his decision.

By that point, Gafford had already played in 32 games and was only missing a relatively insignificant postseason tournament. The football equivalent for Boyd would have been choosing to opt out of a minor bowl game after the 10 regular season games.

Instead, Boyd is choosing to exit stage left with 20% of the regular season remaining. That’s the basketball equivalent of quitting your team during the February homestretch before conference tournaments begin. Can you imagine how Hog fans would be treating Desi Sills if he had opted out of the Arkansas basketball team in the middle of the team’s amazing streak of 11 straight SEC wins?

No star college basketball player has yet done that to his squad.

That’s one difference between the opt outs of Gafford and Boyd. The bigger difference is that while Gafford was the most dynamic player on his team, he wasn’t a senior captain entrusted with a leadership role.

Before the season began, Sam Pittman and the staff gave Boyd, along with seniors Grant Morgan, Feleipe Franks and Jonathan Marshall, the honor of captaining the first team of a new era.

They did great job helping turn the Hogs program around in the first couple months of the season. Boyd, hampered by injury, didn’t play as well as expected, but showing up to practice and in the locker room still matters.

Captains lead regardless of whether they are producing all-conference seasons or not. And they should serve as examples to teammates by persevering whether they start or not.

Boyd did a lot of things right in his time on the Hill. If he was already gone to the NFL by this point, nobody would have held that against him. As his teammate Mike Woods Tweeted out, “the man came back and didn’t have to, gave all he had all 3 years, and on top of that owes no one anything.”

On that last point, I disagree.

Boyd, because he accepted the captaincy for this regular season — not 80% of it, but 100% of it — owed fans, teammates and coaches the courtesy of sticking around. Even if his heart wasn’t in it 100% of the time, even if his confidence had taken a hit, the best thing to do was grit it out for a couple more weeks.

Instead, in the end, it looked like he thought more about himself, his family and the money he stood to gain:

If Rakeem Boyd hadn’t fully committed to the team, he had every right to opt out of the season early. Instead, he accepted the captaincy, which he should have known meant being in it for the long haul.

If he thought otherwise, he should have never accepted the honor. But if he understood the full responsibility of captaincy, and chose to opt out anyway, then he disrespected what it means to be a captain.

All the same, there is a lot to admire about Boyd and what he did before this kerfuffle. He also deserves credit for answering questions about his departure directly from the media and not shying away from tough questions.

This controversy has mostly washed over and I am confident he will remain mostly beloved. However, his legacy — i.e. how he’s remembered by fans — isn’t something coaches and players get to decide.

Things will only get better as time passes.

I love it when your teammates can hold you accountable

Rakeem Boyd and the NFL Draft

Boyd is currently preparing for the 2021 NFL Draft in Frisco, Texas.

He projects to be a potential late-round pick because of the following strengths:

“He’s explosive in the lower body, which occasionally lends himself to hurdling defenders or leaping over the pile. Boyd demonstrates an impressive initial burst when working through the hole, along with quality long speed that enables him to run away from defenders at the next level.”

“He is always a threat to take it to the house. Boyd is above average in pass protection; he shows a sturdy base and ability to deliver a blow.” – The NFL Draft Bible

On the other hand, Boyd may not be drafted at all. The following weaknesses could be too much of a red flag for teams: “Despite solid burst and long speed, Boyd is not a shifty back in the open field.”

“He lacks the elusiveness and change of direction to make defenders miss consistently.”

“He has also had limited impact as a receiver and doesn’t consistently play on third downs, while his route running leaves a lot to be desired.”

Boyd says the NFL scouts he’s talked to haven’t expressed any concerns over his decision to opt out.

Processing…
Success! You're on the list.
Whoops! There was an error and we couldn't process your subscription. Please reload the page and try again.