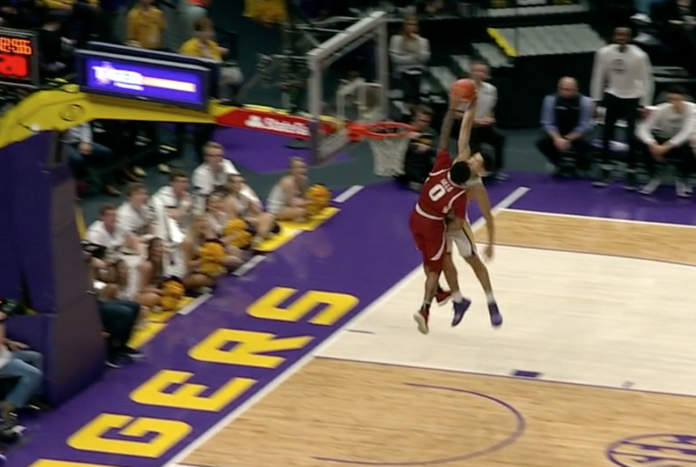 It was a game Arkansas had no business winning.

At first blush, the final numbers seem insurmountable. On the road, against a red-hot No. 19 LSU squad, the Hogs were out-rebounded by 22, shot 25 fewer free throws and turned the ball over 18 times.

“You look at the stats, man — it’s like ‘There’s no way,’” Mike Anderson said after the game.

But the Razorbacks still, somehow, eked out a 90-89 win in a hostile environment in which it seemed even the referees were at times against them. They hit 13 of 24 three pointers (even Adrio Bailey hit one), but they also showed immense heart in giving LSU its first home loss and first SEC loss of the season.

Here are three of the biggest reasons Arkansas pulled off its biggest win of the season so far.

Big time help off the bench

Before Saturday night, Mike Anderson had a premonition about freshman guard Keyshawn Embery-Simpson.

“I told him before the game, ‘You may have a breakout game,’” Arkansas’ head coach said. “Because he’d been practicing well, shooting the ball well in practice.”

Embery-Simpson delivered, racking up a career-high 16 points. Most of his damage came in the first half, when he nailed four three-pointers. Then, in a flash of supreme effort, he himself got damaged.

With Arkansas up 18 points with 13:27 left in the game, he crashed into the scorer’s table going after a loose ball and hurt his left collar bone area.

Embers-Simpson later returned and wasn’t quite as effective, though he did hit a jumper soon after checking in. With Arkansas clinging to a four-point lead with five minutes left, he took a huge charge on a Skylar Mays breakaway attack on the basket.

On paper, freshman Desi Sills had one of his least impressive games. He went scoreless with a single rebound and assist. But he also sacrificed his body in an amazing block that no doubt inspired his teammates to not only talk about 110% effort — but to actually show it.

Just moments after the Embery-Simpson injury, Sills tracked down Skylar Man on a breakaway dunk attempt. Sills skied to block the shot at the rim, then twisted mid air and fell hard against the stanchion. He laid there for a minute or two, grimacing, but eventually was able to limp off.

“I am just in awe at the effort of the Arkansas Razorbacks,” ESPN color commentator Dane Bradshaw said. “These are freshmen you’re seeing laying it all on the line. Usually, they say ‘I’m not gonna get on a poster. I’m not gonna take a chance there.'”

MONDAY UPDATE: (from beat reporter Andrew Hutchinson): ” Mike Anderson via the SEC teleconference on freshman guard Desi Sills, who missed the final 13 minutes at LSU after falling hard: ‘I think he’s going to be okay. Probably bruised some ribs or something. It knocked the wind of him, I know that.'”

The rangy 6’8″ sophomore had one of the games of his career by holding back on shot attempts and focusing on the areas where he can be good to great. Sure, Gabe hit a three in this game, but the Hogs have about seven other players who can shoot better.

Mike Anderson doesn’t need him shooting too much.

He needs Osabuohien to play at max effort in other facets of the game. In the first half alone Osabuohien racked up five assists, many of which led to point blank makes by Daniel Gaffords. Arkansas has struggled to consistently feed Gafford inside, but Osabuohien has the height to engage in an effective high-low game with Daniel. It will be important for both Osabuohien (and Reggie Cheney) to continue developing that high-low chemistry with Gafford as the season rolls on.

Opponents will scheme against that, and increasingly lay off Gabe. That’s where his improved perimeter shot will come in handy.

Osabuohien then took three charges in the first nine minutes of the second half. That helped delay the Tigers’ rally some as they came charging back from an 18-point deficit. He ended up fouling out with 7:33 left in the game.

Two more Razorbacks — Jalen Harris and Daniel Gafford — would foul out in the following minutes.

This was in many ways the very definition of a team win.

They Hogs played as one beating heart to gut this game out, and you can see how much it meant to them (and a dancing Mike Anderson) in the post-game locker room scene below:

“We were on the shoulders of Dan Gafford to get it started,” Mike Anderson said. His star 6’11” sophomore racked up 23 points (on 11 of 15 shooting), 8 rebounds, two blocks and deflected a few other balls. That included a spectacular alley-oop block attempt to end the first half.

Throughout the second half, LSU bigs brought the hammer down on Gafford.

With Arkansas up by one with just under four minutes to go in the game, he went up for an offensive rebound in a forest of Tigers. LSU star freshman Naz Reid elbowed him in the face, and Gafford crumpled to the ground.

Razorback radio color commentator/former coach Matt Zimmerman went apoplectic on the air, absolutely sure it was a flagrant foul. But it was ruled a common foul.

This wasn’t the only situation in which the referees appeared to swallow their whistles in favor of over-aggressive LSU players. At an earlier point, Hog Isaiah Joe was essentially tackled, but no technical was called.

This is a signature win, the kind that propels teams into the postseason (whether NIT or March Madness).

Winners of three of its last four games, Arkansas is turning the corner for another strong conference finish in February. “It’s always been the formula,” Anderson said. “The experience we gained, in non-conference and as we bumped our heads coming into conference play.”

The Hogs will need to continue to improve at the same rate to win a majority of their SEC games from here on. Right now, Arkansas is 4-4 in the conference and can go to 5-4 against a weak Vanderbilt team at home on Tuesday.

Then it will go on the road against South Carolina and Missouri.

For the Hogs to win all three of these upcoming games, its young players must continue to improve their decision making.

“I remember one play in particular — we’re up 16 or 17 points and we get a turnover,” Anderson said after the LSU game. “Mason Jones just pulls up and shoots a three [he missed] as opposed to making them play defense. But that’s the learning curve of a young basketball team. We’ll learn from those situations.”

Anderson praised his young team for not panicking, but also pointed to another area of improvement. In the final seconds, Naz Reid missed a layup attempt and the ball ricocheted out of bounds off an Arkansas player. Hog Isaiah Joe scrambled to catch it with one hand in mid-air, but didn’t call a timeout to retain possession.

Instead, he blindly flung it back in bounds, and LSU ended up with two more cracks at winning the game. Anderson said this is something they will review on video and improve from.

Want to see some of the most electric plays? Go to the following time markers on the video below:

At :44: Extraordinary “behind the ear” pass by Jalen Harris

At 3:10: Another absolutely gorgeous feed by Harris, this time from the baseline