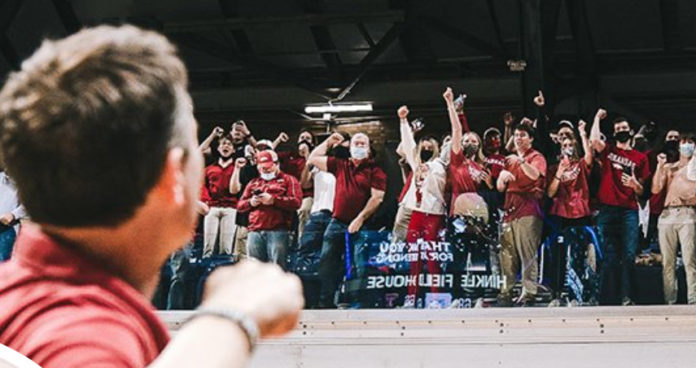 As best as I can determine with the help of the Internet, my first memory of Arkansas basketball is from March 3, 1983, when the fifth-ranked Hogs fell to No. 1 Houston, led by future Hall of Famers, Akeem Olajuwon and Clyde Drexler.

Or maybe it was March 10, a year later, when Ricky Norton hit a game-winning jumper to lift No. 8 Arkansas over Texas A&M in the semifinals of the Southwest Conference tournament.

I’m not sure which, and I don’t even know if we won or lost. I was four (or five) years old.

What I do know is that the adults in the room were much more excited about what was happening on television than I’d ever seen them, and that Joe Kleine fouled out, which was memorable for the fits of despondency it prompted.

The picture of that day in my memory is all washed-out, hazy, tinged by nostalgia.

But the feelings of it are easy to conjure: I had almost no idea what was going on … and it seemed like a whole lot of fun.

Other things, I remember more clearly:

During the last couple of weeks, watching as the best Arkansas team in 25 years rekindled the past, I realized that just as much as what happened in those golden-age games, I remember where I was and who I was with; that as trivial as it might seem to an outsider, the history of this team is irrevocably intertwined with my own.

I suspect it’s that way for most true believers. It’s why one well-known fight song implores the faithful to “wake up the echoes.” We name it tradition, but really it’s a kind of homing signal that can call us back to long-passed times, to places that life has made distant, and to people now departed.

And I think it’s why long-time fans are most susceptible to tears of joy when the success of the present whips up memories of the past.

It’s not a phenomenon unique to Arkansas, but it’s as strong there as it is anywhere in the world, because such a number of the state’s residents so strongly identify with the flagship university.

So when Jalen Tate said after Monday night’s loss to Baylor in the Elite Eight that this team will be remembered, he couldn’t have known how right he was.

Much has already been said and written about the 2020-21 Hogs, and I doubt there’s anything I could add that those reading this don’t already know.

Because what made this team special was obvious.

The well was deep, diverse and widely distributed, but it wasn’t the most talent-soaked squad Arkansas has ever had. Nevertheless, my memory covers a wide berth of Arkansas’ glory years — the Triplets Era excluded — and I can’t recall one that played with more heart than this one.

I hate to slide into cliche, but there it is. I’ve been racking my brain for a few weeks now for the best way to describe it — grit, tenacity, mental toughness — well-trod platitudes, every one.

All, no less, completely accurate.

The dogged strength of will in this unselfish group, hewn together in the midst of a pandemic, made it a joy to cheer for.

All brought something unique to the table, all bought into their roles — however big or small — and Coach Eric Musselman found a way to make the pieces fit.

It was an easy team to love, a hard one to grieve, and we’ll remember all of it, no doubt.

But time, just as certainly, will smooth the edges in our minds when it comes to wins and losses and who scored which bucket to spark what comeback.

For those of us lucky enough to have seen this program at its heights, the season will find a prominent place in our memories. For another generation, it will form the foundation for new ones (I can easily envision a version of the year 2057 in which today’s 5-year-olds are scouring box scores on hogstats.com, trying to figure out which game it was that made their dad scream DEVO! loud enough to wake the ghost of Frank Broyles).

Back to the present: those college roommates who I watched the Joe Show with in 2000 are now middle-aged dads on a group text, always active on game days; the farmhouse where I fell in love with Scotty Thurman is still in the family, with an aunt and uncle replacing a Mamaw and Pop; the hometown doesn’t get KATV anymore; and Dad saw his last Hogs game nearly six years ago.

Time marches on, no matter what.

But every once in a while something comes along and presses the mental rewind button and we find ourselves awash in unexpected emotion, heart-deep in the past.

It’s not something to be taken for granted, and I’m just one of many who couldn’t be more grateful to this Hogs team for helping us turn back the clock.

Brent Holloway is a sporadically active freelance writer and a native of Smackover, Arkansas, currently living in Georgia. Reach him at jbrentholloway@gmail.com.