In the minutes following the heart-pounding finish to the Texas Tech-Arkansas game in the Round of 32, Eric Musselman just about lost his mind.

A flood of emotions swept him across the court from the grasp of his ecstatic players and up onto the scorer’s table, where he shouted his gratitude to the Razorback fans who had migrated north to see the program make its first Sweet 16 since 1996.

When all that craziness finally subsided, the Arkansas basketball head coach noticed someone standing court-side, patiently waiting for him.

“There was Coach [Chris] Beard, still waiting to give me a fist bump,” Musselman told Jim Rome in a recent interview.

“I lost my mind, and there he was, wanting to congratulate me.”

“He waited and I said, ‘Coach, I apologize. I just got caught up in the moment.’ And he says, ‘Hey, I would have been doing the same thing, man.'”

That same directive isn’t so easy for some Texas Tech and Arkansas fans these days.

Their beloved head coaches had already been at the middle or top of wish lists for the next Indiana basketball coach opening following the firing of Archie Miller. Now that Mike Woodson has been hired by as the Hoosiers coach, Texas becomes the nation’s most prestigious opening and de facto biggest threat to hire either away.

Oklahoma, too, has an opening.

Kruger, Musselman’s mentor from his Atlanta Hawks days, and Musselman were supposed to square off in a game this past December. But COVID-19 precautions threw a wrench in those plans.

Although Kruger elevated the Sooners program overall, it’s not much of a threat to poach Beard or Musselman.

The rumor mill for next Oklahoma basketball coach has leaned more toward mid-major up and comers like North Texas’ Grant McCasland and Colorado State’s Niko Medved, or more established types like Dana Altman and Mark Turgeon.

No, the more serious threat comes from farther south.

In Texas, Shaka Smart has resigned from the Longhorns after six underwhelming seasons in Austin, to pick up the reins at Marquette instead.

This news immediately unleashed a torrent of speculation around whom Longhorns athletic director Chris Del Conte will target as top candidates for next Texas basketball coach.

“It’s too early for any of us to say ‘Here’s candidate, A, B, C, and D,’ said CBS Sports’ analyst Matt Norlander on the Eye on College Basketball podcast.

Norlander’s co-host Garry Parrish chimed in, saying “Texas is a place where you can actually get somebody else’s coach.”

Whether that coach from college or the NBA is yet to be seen.

So far, the only known candidate to have interviewed for the job is former Longhorn Royal Ivey, an assistant with the Brooklyn Nets. That happened on Sunday.

Going forward, Gary Parrish said Texas needs to at least check in with Eric Musselman and his camp.

“I’d make that phone call… I’d want to see it if he maybe wanted to come live in Austin and be the head coach of the Longhorns.”

Parrish isn’t the only national media member stoking the fires of Texas going after Musselman.

Here’s the executive producer of “The Herd with Colin Cowherd”:

Chris Beard or Eric Musselman. Go get one https://t.co/uQMQwu44n2

And here’s Brian Hamilton from The Athletic:

“It’s debatable whether Musselman has it better in Fayetteville than he might have in, for example, Minneapolis.”

“But it’s probably not debatable that Texas is a more enticing opportunity, given the talent base from which to draw. And at a time when Texas needs to stoke its followers’ energy and capitalize on the momentum of a new building, nobody would out-salesman Musselman.”

This sort of thing may soon become old hat to Arkansas basketball fans.

After the Sweet 16, for instance, one of USA Today’s lead columnists devoted an entire piece urging Musselman to lead the Hoosiers.

Eric Musselman is starting to appear on the short list of every big-time job opening in college basketball. That may soon apply to NBA openings as well.

Still, Austin is an undeniably wonderful place to live, the state is brimming with blue chip basketball talent (though Musselman doesn’t need to rely in-state talent with his recruiting prowess and ability to work the transfer market) and it’s likely that Longhorn boosters are willing to pay north of $5 million per year to get their man.

Musselman currently makes $2.5 million a year, which is at the bottom of the SEC.

Yurachek has said that he daily talks to Musselman and has opened talks with his agent on an extension and raise.

But some wonder why Yurachek hasn’t already inked a deal.

“I just don’t understand why Arkansas hasn’t got a deal done with Eric Musselman,” college basketball analyst Aaron Torres said a couple of days ago.

“Maybe Eric Musselman is waiting until after the season. Maybe he’s trying to win as many games so he can leverage as much out of Arkansas as he can… I don’t have any insight into what’s going on, but you got to get that deal done.”

In the immediate aftermath of the Baylor loss, Musselman sounded like he’s not going anywhere.

On social media and in his press conference, he referenced looking forward to working with the Razorbacks returning next season:

Still, whether Arkansas basketball fans like it or not, the Texas job is attractive enough to warrant a look.

However, based on multiple recent reports, it looks like Chris Beard may be in line to take the pressure off Arkansas.

Last Friday, a high-placed source at UT told told LonghornsCountry.com that Chris Del Conte is in “active pursuit” of Beard.

“Got a call from a college basketball source I trust who says Chris Beard is ‘absolutely going to Texas. It’s a done deal. One-hundred percent,’ Tweeted Brad Townsend.

“Obviously college basketball isn’t my coverage area, but this source felt strongly enough to call and tell me.”

In the above podcast, Parrish said that he had heard from sources over the years that Beard was waiting for the right opportunity to jump.

“I’ve never heard that straight from Chris’ mouth, was that he wanted to do the Texas Tech job as awesome as he could do it until the big thing came calling for him, whether that was Indiana or down the road, Duke, North Carolina, Kansas, or right now Texas — or even the NBA.”

It’s notable that since all these reports came out, Beard hasn’t felt it necessary to refute them publicly. 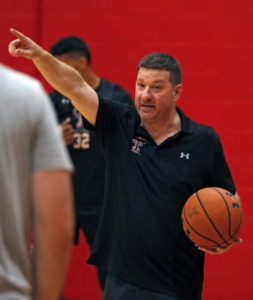 Parrish also said he had spoken to a number of NBA people over the years who raved about Beard’s ability to prepare teams and develop players.

They said he runs “maybe the best practices in college basketball. The attention to detail, the teaching, the way he’s able to communicate and connect with players.”

An announcement that Beard is taking the Longhorns job would rankle Texas Tech fans to no end. Especially with Patrick Mahomes openly pleading with Beard to stay at his alma mater and Lubbock restaurants offering millions and million of free calories in the form of gifted pasta and wings.

Although Beard is a UT grad, he coached under Bobby Knight for 10 seasons at Texas Tech. In 2016, when he practically Dana Altman-ed UNLV for Texas Tech, he referenced Fordyce, Arkansas native Bear Bryant.

If Beard decides to adopt another momma and move to Austin, though, it would be a huge sigh of relief for Arkansas fans.

It would likely simplify Yurachek’s job of negotiating a contract raise and extension with Musselman in the coming days.

How much it would take to keep Musselman in Arkansas is unknown, but it’s not unreasonable to think he will get something in the $5 million per year range. That would put him in the top five in the nation, on par with Chris Beard and only behind John Calipari in the SEC.

That’s when Beard’s buyout to go to another Big 12 school drops to $4 million, sources told ESPN’s Jeff Borzello. It’s $2 million for any school outside the Big 12.

“That amount of money would normally be a bit of an issue for most schools, but this is Texas,” Longhorns Country’s Matt Galatzan writes.

“And with Smart accepting a job at another school (at the urging of UT, we are told), which allows Texas to bypass the financial ramifications from firing him, the road to finding Smart’s replacement, and securing the funds to hire Beard, becomes that much easier.”

In the Jim Rome interview, Musselman said he and Beard planned to get together later and talk shop.

“He and I talked later that night just about basketball and getting together this summer and exchange ideas,” Musselman said of Beard. Later, he added: “He’s one of the best coaches in the history of college basketball.”

“I mean, he’s an ultimate competitor and for him to wait around and then for us to talk later that night, I thought it was incredible.”

Not quite as incredible as it would be for Texas Tech fans if Beard left for their Big 12 rivals after five seasons in Lubbock.

Or for Arkansas fans if Musselman did the same for their old SWC rival after just two seasons in Fayetteville.

Jim Rome and Musselman have known each other since they were both 23 years old. That familiarity shines through in this fascinating interview:

Here’s a preview of what Aaron Torres has to say about his top four Texas basketball coach candidates:

Torres goes in depth on these possibilities here:

CBS’ Matt Norlander throws out Dana Altman as a possibility if Oregon goes farther in the NCAA Tournament.

He adds: “You’ll have guys in the area that had success that made the tournament who have been in the league. Grant McCasland at North Texas, Paul Mills is currently still coaching Oral Roberts. He could be also a candidate at Oklahoma.”

“Or even like a Kyle Keller at Stephen F. Austin, where they’ve been good. They just haven’t been eligible to make the tournament. He’s had a really good run there as well.”

Garry Parrish throws in Porter Moser (who is likely a better fit for Indiana given his midwest roots) and Josh Pastner, the Georgia Tech coach who cut his teeth at Memphis.

“Pastner is pretty hot right now. He is from Houston. Again, I wouldn’t put him in the same Chris Beard, Eric Musselman category. But if I was doing a list of 10 people, Josh Pastner would probably be on there somewhere.”

Meanwhile, Texas sports analyst Steven Ngati has a detailed breakdown of pros and cons for multiple Texas basketball coaches in his latest podcast.

When it comes to Musselman, he says:

“Love his energy. I love his offense. I love his spacing. All of his teams have always been offensively dynamic. Even going back, early two thousand Golden State Warriors, and they were trash, couldn’t play defense, but they score points.”

“Especially when you look at some of the guys, higher end talent guys that are available, the Jaylen Greens, the Greg Browns and people that have come out of just the state of Texas alone.”

Ngati added he saw a “coaching gap” between Musselman and Beard in the Round of 32 matchup.

“There was a lot of similarities in terms of some of the pressure tactics and how they played that game. But what I liked with Eric Musselman’s team is they can play more than one type of style and win.”

“We’ll see how far they go in the tournament. I’m sure he’s going to get a nice little raise from Arkansas, but that’s somebody who you can go and pursue and poach.”

In this video, he discusses the following coaches at the marks below:

Another person who insinuated a coaching gap between Musselman and Beard, albeit in a much different way: