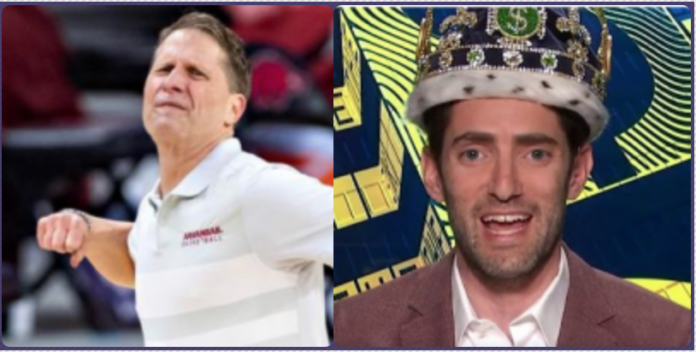 Before he got destroyed by Eric Musselman on Sunday night, the CBS Sports HQ analyst earned the ire of Arkansas basketball fans everywhere by insulting the head Hog’s coaching ability heading into a Round of 32 showdown with Texas Tech:

“When you look at the head coaches in this game, I think it’s one of the biggest mismatches you’re going to see round of 32… Chris Beard has to be licking his chops knowing Eric Musselman is on the other sidelines.”

Eric Musselman didn’t take too kindly to this.

In the press conference after the 68-66 win, the Arkansas basketball coach shot right back: “I was alerted before the game about somebody at CBS who said something about the coaching matchup, so I was a little shocked we could actually win a close game, based on his comments,” Musselman said.

“Whoever that guy is, I’ve never heard of him in my entire life. So his credibility is absolutely zero.”

In another part, just to make sure folks knew Fuhrman was down for the count, Musselman reiterated his main point: “I mean, who is this guy? He’s never called a timeout. I mean, who is the guy? I don’t know who he is.”

“Yeah, I took it personal.”

You’d think a win clearly showing that Musselman is of (at least) equal coaching ability to Chris Beard would have shut Fuhrman up.

On Monday, he picked up his various smoking limbs that were strewn about, reconstituted himself and appeared on Fox radio with Clay Travis.

There he proceeded to fan the flames even more.

With a day’s hindsight, would Fuhrman take back what he said?

No, that’s not what fools do.

“I stand by everything I said,” Fuhrman told Travis as he apparently stared directly into the sun.

“Arkansas was a double-digit blown lead away from their entire fan base needing to eat crow.”

“And if Mac McClung doesn’t miss the front end to try and tie the game up and they don’t miss two layups. Suddenly, I look like the genius instead of everybody else.”

After the game, it’s clear that both coaches are great in their own rights.

But that should have been clear before the game, too.

Not only did Fuhrman forget to do research into Musselman’s past, it looks like he also failed to find out that Arkansas fans are a just a little bit vocal.

“A hat tip to the Arkansas fanbase, because a lot of them had some fun with this — but I had no idea it was going to elicit such vitriol from not only the head coach… but that the head coach’s wife [Danyelle Musselman] was going to circulate it all over social media.”

She retaliation-Tweeted Fuhrman: “At first I was really irritated, but now I think @toddfuhrman is hilarious #mismatch.”

On Wednesday, Danyelle Musselman went into details about the episode with sports radio hosts John Nabors and Joe Franklin on the Buzz 103.7 FM.

She said usually she doesn’t let things like this get to her.

“For whatever reason, this guy, he took a direct shot at Eric that was completely, it was ridiculous. And so, I’m not going to lie, I was irritated. I had to clap back with my own little comment.”

“And then he goes, and he does whatever he wants,” she said on the “Out of Bounds” show.

She continued: “There was a million things that you could say about my husband, but I don’t think anyone would ever say that he can’t coach.” 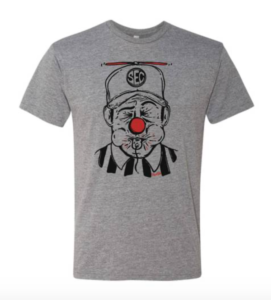 In the Sweet 16, Arkansas will take on little ol’ Oral Roberts.

Oral Roberts has played the role of giant killer to perfection so far, beating Ohio State and Florida, but they will have their hands full with an Arkansas squad that has already soundly beaten them once this season.

Not that Fuhrman cares.

The betting analyst is all in on Oral.

“I’m not sure what the dollar amount is going to be, but I’m going all in,” he told Clay Travis.

“I will pound my chest if, ORU behind this improbable run is able to do the unthinkable and get to the Elite 8.”

“Look, Arkansas has been a great basketball team all season long. I had some question marks about their ability to make big stops… So Arkansas, man, you got bigger fish to fry than worrying about what Todd Fuhrman thinks about you.”

Keep up your antics, Todd.

Your hate only fuels Musselman and his team to greater heights. You’ve got these Hogs fired up.

Oral Roberts’ runs has been one of the great stories of the 2021 NCAA Tournament, but oddsmakers at OddsChecker think it’s finally over. Arkansas is given -650 odds, or an 86.7% chance to end Cinderella’s ball.

Meanwhile, Oral Roberts is given +520 odds, or an implied 16.1% chance to keep on dancing.

Arkansas has had a phenomenal run to end their season. They’ve won 11 of their last 12, including two impressive showings in the NCAA Tournament. The first, a blowout win against Colgate showed that nobody is going to beat Arkansas in a shootout.

The second, a two-point win over Texas Tech showed that Arkansas can win a defensive battle if forced to as well. They are led by freshman star Moses Moody who will be a lottery pick in the upcoming NBA Draft.

Bettors are fond of Arkansas as well, as 6.4% of NCAA Tournament winner bets over the past week have been placed on them. That’s good for the 4th most of anyone left in the field.

Oral Roberts stunned the Summit League with a buzzer beater to clinch a tournament spot. They followed that up by beating Ohio State and Florida.

They’re no stranger to being massive underdogs. In fact, they seem to thrive in that role. They’re led by Sophomore guard Max Abmas and Junior forward Kevin Obanor. The pair have dominated elite level competition in back to back games now.

Despite their miracle run, only 0.6% of bettors over the last week have bet on Oral Roberts to win the NCAA Tournament.

“Arkansas has to be the favorite here,” OddsChecker spokesman Kyle Newman said. “Oral Roberts loves to get out and run so they can outscore their opponents. There are few if any teams in the NCAA that play that style of game better than Arkansas”

“It’s going to take an impressive game plan and a little luck for Oral Roberts to figure out how to play their style while slowing down Arkansas offense.”

Ok, maybe he’s not such a fool.

He’s in the entertainment business, after all, and knows how to capture a headline:

“If this is the kind of strong response I can get out of fanbases every time I pick against them, bring it on, because I’m going to lose a lot more bets. And there’s plenty of fanbases across the country that can have plenty of fun at my expense.”

Still, you can only get away with unwarranted attacks on someone’s professional abilities once or twice before the act wears thin.