In 1952, Paul “Bear” Bryant was Kentucky’s head football coach but was butting heads with the school’s legendary basketball coach Adolph Rupp. The Fordyce, Ark native wanted out, and his top choice was the University of Arkansas. A major obstacle, though, was that Bryant wanted to essentially have the power and pay of both an athletic director and head football coach.

Unfortunately, Arkansas already had an AD in John Barnhill. Getting him to step out of that job would prove tough. On top of that, some legislators felt it was necessary to abolish the UA’s AD position altogether. That process would be tougher still: 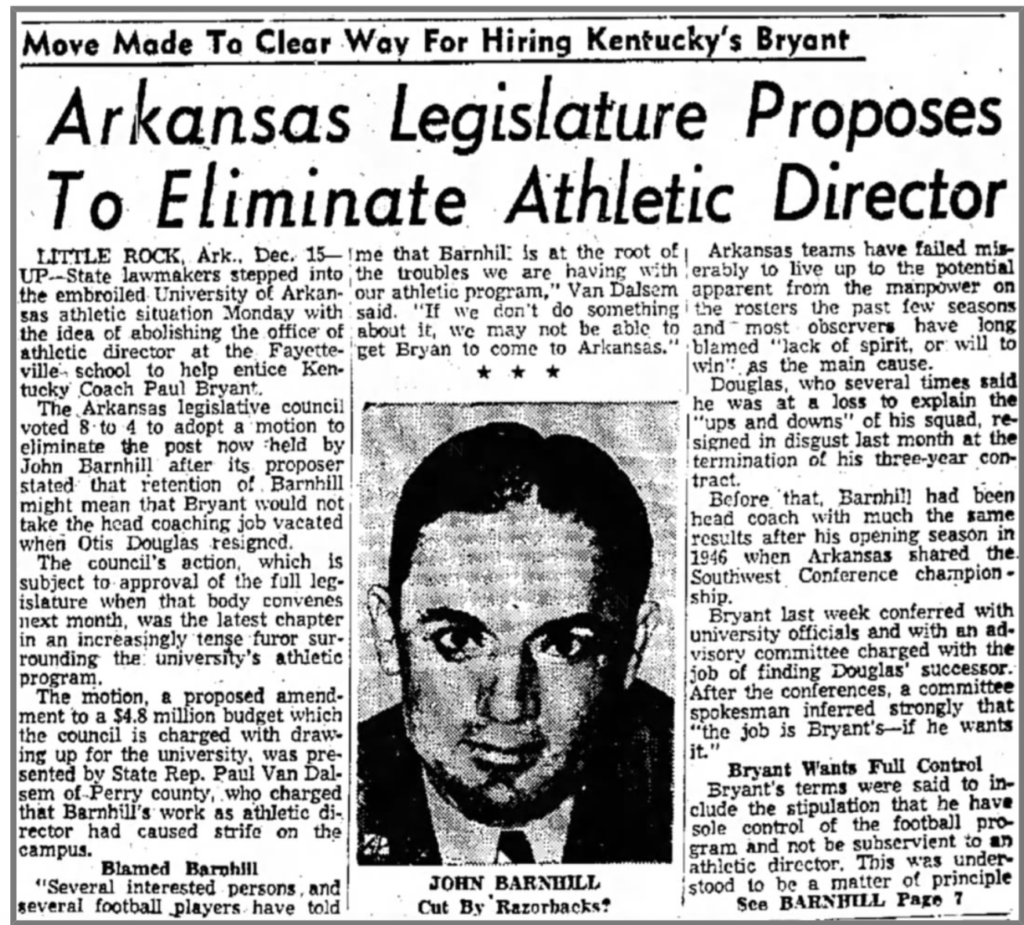 Arkansas boosters were thinking up other ways to supplement Bryant’s salary, too. One of them, Jack Stephens, was a partner in Little Rock-based Stephens, Inc., now one of the nation’s largest investment banks not based on Wall Street. Around this time, Stephens and his older brother Witt Stephens were also building assets in the nascent natural gas industry. We learn more about this episode in Bryant’s memoir, Bear. Bryant recalls leaving Kentucky to rendezvous with Arkansas officials in Memphis:

Arkansas people picked me up in a little old one- engine private plane and flew me to Little Rock. I met the governor and the university president, and they offered me all the goodies they could, and Pete Ranay and Jack Stevens [sic] offered me stock in their oil company, Arkansas-Louisiana Gas. A chance to get in on the ground floor. If I had taken it, I’d be worth $40 million now.

I should have. I should have just said the hell with it and left, which is what I eventually did.

It should be noted Bryant might have made a mistake in saying the stock belonged to Arkansas-Louisana Gas. In 1952, the Stephens didn’t yet own that company. It’s possible the stock related to another natural gas company or this event took later than 1952.

According to the Arkansas Encyclopedia of History & Culture, “the Stephens brothers acquired Oklahoma Producing Co., a natural-gas producer, in 1953 and renamed it Stephens Production Co. Owning both Arkansas Oklahoma Gas Corp. and a production company, the Stephens brothers could drill for natural gas and then pipe it into homes and businesses.