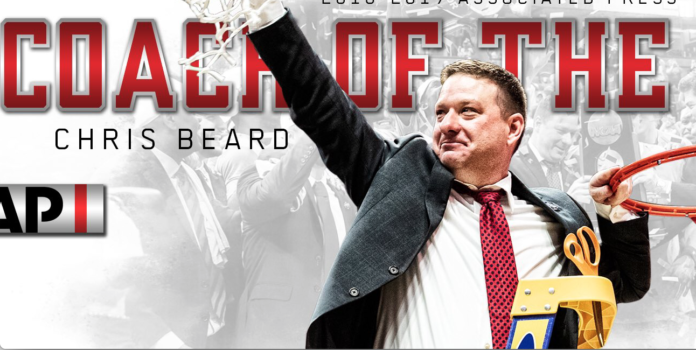 It’s more official than ever before.

Chris Beard is the hottest coach in college basketball. Recently announced as the 2019 AP College Coach of the Year, Beard has turned Texas Tech into a basketball power in three short years. Last year, Beard took the Red Raiders to the Elite Eight and this year has them in the Final Four.

Beard’s ability to reload his roster has been especially impressive.

He lost a team full of seniors from last year, plus a first-round NBA draft pick, and has come back with an even stronger group. Consider this year’s Texas Tech squad is college basktball’s best defense going back to at least 2002, according to Ken Pomeroy’s defensive efficiency stat. That stat estimates how many points a defense would allow against an average team over 100 possessions. Texas Tech has a 84.1, the lowest figure in the 18 seasons of the data set.

One of its most impressive efforts came in the Sweet 16 against Michigan. “The Wolverines went an abysmal 1-of-19 from 3 and committed 14 turnovers,” the Ringer’s Rodger Sherman wrote. ‘We heard from the different people that played [Texas Tech] during the year that you’re going to be amazed by how quick they are, how good they are at staying in front of people,’ Michigan head coach John Beilein said after the Red Raiders routed his team 63-44. ‘They rally to the ball, which usually gives us open 3s, but you still can’t get open 3s.'”

This kind of defensive intensity is the sign of a tactically strong defense combined with consistent, all-out, inspired effort. It’s the exact kind of thing that Arkansas did not deliver consistently during the Mike Anderson era, in which fans saw Hogs rallying to the ball plenty of times, but also saw plenty of open 3’s provided to opponents as a result.

Beard’s ability to get his players to play with max defensive effort and max smarts, every game, every half, is at the heart of what makes him the most sought-after coach in the game today.

The trust and rapport Beard has built with his team was on full display in the aftermath of Texas Tech’s semifinal win over Michigan State. The Red Raiders will play Virginia for the national title:

After this win, Arkansas is set to hire Eric Musselman as its head coach. However, the article below still sheds light on how Chris Beard could be lured away from Texas Tech in the future, even if it’s not likely to be to Fayetteville.

Arkansas athletic director Hunter Yurachek is courting him to take on the challenge of restoring Razorback basketball to its status as national powerhouse. Yurachek wants to talk with Beard about the opening, according to sources of the Arkansas Democrat-Gazette.

It’s widely assumed Arkansas has a slim chance of prying Beard, a longtime college coach in the state of Texas, away from Texas Tech. Beard was a manager for the Texas Longhorns and assistant at Texas, as well as multiple other colleges in that state. His three daughters Avery, Ella and Margo still live in the state. It’s assumed that Beard would not leave to coach in another state like Arkansas (or California) because he doesn’t want to go farther away from them.

However, Beard himself told Sports Illustrated’s David Gardner that “my daughters are going to support me and love me no matter where I coach.” In the 2016 interview, Beard explained that of course proximity to his daughters factored into his decision to take the Texas Tech offer, but it wasn’t the most important factor.

“I didn’t return to Texas Tech to coach just to be close to my daughters. The fact that I will be is a really special thing, and it’s a great thing. I came to Texas Tech to compete in the Big 12, to win championships, to graduate every player and to continue to build a program. To say that the decision was made just because my daughters are here isn’t true. My daughters are going to support me and love me no matter where I coach. To me, it was just a special thing and a really cool thing, but it wasn’t the reason I came to Tech.”

Essentially, Beard left the door open here for any potential suitors in the future. Arkansas is one such suitor, and Fayetteville is a lot closer to Texas than Los Angeles — where UCLA is also looking for a new head coach.

In the same way that football coach Chad Morris occasionally uses a Razorback plane to fly down to the Dallas area to be with his family, the same could be arranged for Beard. His two youngest daughters attend school in Abilene, about a 2 1/2 hour drive from Lubbock.

But there are bigger issues. For starters, how much can Arkansas offer Beard? And how will that compare with what Texas Tech tries to re-up him for?

If Yurachek is serious about getting an A-lister, he’ll need to find a way to pay A-list money. That may mean doubling his salary — to something in the $6 million or more range per year. It’s not known if Texas Tech is willing to match or surpass what Arkansas could offer. Currently, Chris Beard is signed to a six -year, $19 million deal that is paying him $2.8 million this year. It will gradually increase to $3.3 million through the 2023-24 season with a buyout of about $6 million if Beard left after this season.

Texas Tech Athletic Director Kirby Hocutt told the Dallas Morning News this week he’s going to upgrade Beard’s contract after the season. In fact, those talks will start as soon as Tuesday or Wednesday of next week.

That may happen at the same time as talks between Beard and Yurachek (as well as other athletic directors). Perhaps Beard simply wants to get a better idea of his market value by talking with Arkansas, in order to use it as leverage with Texas Tech. Or perhaps he is genuinely interested.

Much of this will boil down to how badly he wants to one day coach at a bigger program like Indiana (where his mentor Bobby Knight coached) or his alma mater the University of Texas. If he’s set on a school like this, Arkansas doesn’t have much of a chance.

But if Beard’s open-minded, then Yurachek has the opportunity to pitch him a number of benefits about Fayetteville (besides the fact that, as a beautiful college town, it’s so un-Lubbock). They include:

After that thrilling win, the Trojans were — ever so briefly — 1B to the Hog’s 1A in state. And yet before that, their record-setting run through the Sun Belt created hardly a buzz outside central Arkansas.

No matter where Beard coaches next, he’ll create news all over that state. But, in a place like Austin, Los Angeles, Lawrence or Bloomington, he’ll also be vying with other college programs and professional teams. Not so in Arkansas.

2. The SEC of the early 2020s will be a proving ground for the true king of college coaches

Beard chose to coach in the Big 12 because it offers premier competition. So far, he’s done pretty well. His in-conference winning percentage of 53.2% trails only that of Kansas’ Bill Self (81.9%) and West Virginia’s Bob Huggins (57.2%).

Take Beard out of the Big 12, though, and put him in the SEC and then the already surging SEC becomes arguably the most well-coached conference in the nation. Beard would have the opportunity to mix it up with elite motivators and tacticians such as Auburn’s Bruce Pearl, Tennessee’s Rick Barnes and Kentucky’s John Calipari. This kind of prospect will appeal to extreme competitor.

A quartet of those three, plus Beard, would be good enough to evoke memories of the Big East of the mid 1980s, which featured Georgetown’s John Thompson, St. John’s Lou Carnesecca and Villanova’s Rollie Massimino.

In short, Yurachek has a case to make. Plus, he can always mention that Beard would be only an hour or two flight away from his daughters.