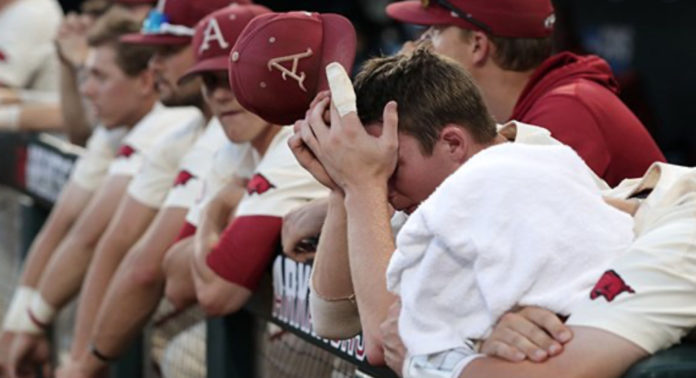 When it’s all said and done, we still have our milestones.

A bevy of firsts this season for one of the premier traditional baseball programs in the country:

For a while, it seemed fitting to simply give the national championship trophy to Dave Van Horn and his troops and we can all get on with our summer. Owning the 2021 regular season and going unscathed in the SEC Tournament made the Razorbacks a confident “chalk” pick all the way through.

But as football analyst Lee Corso commonly quips: “Not so fast my friend.”

Last week’s Game 3 escape from Nebraska, in which Kevin Kopps further cemented his case for best Arkansas baseball player of all time, reminded us just how many chinks were in this team’s armor.

Arkansas lost a heartbreaker 3-2 in the rubber match of the Super Regionals at home. The team that led the nation in home runs and walks couldn’t connect with everything on the line.

Hog fans too well know the drill regarding seasons of various sports ending in a disappointing, sometimes shocking fashion. I don’t think anyone needs a reminder of Omaha 2018.

That squad was not as superior in the regular season but definitely good enough to win it all. So good that a misplayed foul popup is all that separated Arkansas from trophy-wielding glory and the agony of defeat.

I know the feeling firsthand all too well, unfortunately.

My redshirt freshman year, I was a spot starter and left-handed setup reliever for the 1990 Razorback baseball team headed by hall of fame coach Norm DeBriyn. We had experienced an incredibly successful campaign in the old Southwest Conference with a sparkling 47-13 record heading into NCAA regional play.

This squad was ranked in the top 10 a majority of the season, won the first outright SWC conference title in school history and was sent to Wichita State as the #4 overall national seed.

The team was a mix of high end talent and gritty role players. Not unlike the teams you see Dave Van Horn run out there year after year.

Coming off a trip to Omaha in 1989 where we lost a lot of key pieces, our squad was not picked to win the league — much like the 2021 Hogs were overlooked.

Everyone in those days chased Texas, which was coming off an incredible 54-18 record and runner up finish to national champion Wichita State in 1989. Texas A&M was also picked ahead of the Razorbacks coming off a season they went 58-7 and somehow DID NOT make it to Omaha.

We were led by All-American third baseman Greg D’Alexander as the big bopper in the lineup and two time All-American closer Phil Stidham who was Kevin Kopps-esque in terms of dominance from a submarine arm angle.

Current Razorback radio host Bubba Carpenter was an All-SWC outfielder on that team and possessed a smooth stroke from the left side.

We even had a player short in stature (a la Robert Moore) with the 5’2” converted infielder Jeff Houck starting in leftfield. The rotation was solid in the first two spots with an inconsistent, sometimes revolving door for the third starter.

Our team even won a prestigious early season tournament by rolling through the Pepsi/Me & Ed’s Classic in Fresno, California.

The 1990 and 2021 teams had similar personnel, similar regular season results. With one thing I believe will go drastically different…the post season.

Our 1990 team fell off during the SWC Tournament. We had pushed so hard to win that SWC regular season title with critical series against Texas and Texas A&M to wrap up the conference season, then a road trip to #5 Wichita State, that we simply hit a brick wall.

The downhill slide started with a flat, uninspired 1-2 performance in the SWC Tournament in Austin. Then we were sent to Wichita (a couple of weeks after just playing a two series there) as the #1 seed in the Midwest Regional and previously mentioned #4 national seed.

Nowadays, the way the NCAA Tournament works is quite different with the 64 teams making the tournament versus 48 and 16 host sites with a four team double elimination bracket. Those 16 winners matchup in a super regional where they play a best 2 out of 3 for a trip to Omaha.

But three decades ago the format differed.

Then, there were only eight regional locations with six teams playing true double elimination for a trip to Omaha. The eight winners of those regionals advanced to Omaha. With only 48 teams in the bracket, the tournament was extremely tough and many brackets, including ours, would have three to four ranked teams duking it out for those coveted spots in Omaha.

Given the #1 seed in the regional, our matchup was against a lightly respected team — the Fordham Rams straight out of the Bronx. An East Coast team from some no-name conference has no chance against the No. 4 ranked team in the country, right?

The impossible happened and we lost 8-5 with some early shoddy defense and the inability to get big hits against a super-soft lefty Bobby Aylmer.

Wichita State, also stumbling down the stretch, lost its first round game to Georgia Southern (who advanced out of this regional) so the Hogs and Shockers had to match up in the losers’ bracket. After falling behind 6-1, we rallied back to tie the game 6-6, only to lose 7-6 where a bases loaded walk in the 8th inning proved to be the winning run.

A one-point loss, just like the last two gut-wrenching defeats against NC State.

And just like that, a magical season was over. No Omaha.

The level of disbelief and emptiness was unbelievable. All of us players felt it and you could see it on our faces on the cover of the Arkansas Gazette’s Sports page the next day. Not many words were said post game.

Not many needed to be said despite the highly successful season. Arkansas baseball had become a staple in Omaha, much like the modern teams are today.

Baseball can be a cruel game sometimes and we were the recipient of that proverbial gut punch.

From the depths of that despair, there are Arkansas baseball lessons to be learned. From a player perspective, baseball is a very difficult game to play at a high level over the course of sixty some odd games.

Our 1990 Razorback team had all the pieces to be in Omaha which would have continued a run of success with 1985, 1987 and 1989 all making it to the old Rosenblatt Stadium.

The missing piece was the postseason edge required to battle through the regional and advance. If I had to pinpoint one thing that caused our quick exit, it would be playing three immensely critical series plus a conference tournament with three of the four on the road.

Then loading up and going back to Wichita to play the Regional. As Vince Lombardi once said, “fatigue makes cowards of us all.”

That brutal grind at season’s end caused us to lose our edge. Simple as that.

It helped that the 2021 version stayed home through the first two rounds this postseason. That means more to a player than a fan may realize.

That rowdy home crowd was a huge factor in helping the Hogs win the Nebraska series and also fueled that Game 1 wipeout of NC State.

Talent-wise, Arkansas had the overwhelming talent advantage of every opponent in the Fayetteville Regional (we didn’t have that luxury in 1990 as four of the six teams were ranked).

But as evidenced with the 1990 loss to Fordham, and the NC State series, talent alone isn’t always enough.

Especially when that edge is compromised some by losing two of your best pitchers — Peyton Paulette and Zeb Vermillion — to injury.

It seemed like the Hogs kept most of the the same mental focus and tenacity they started the season with, but ran out of bullets on offense.

“What they lacked in overwhelming numbers, they made up in depth. It was a lineup that 1-9 could get you. It’s an athletic bunch but they didn’t steal a ton of bases.”

“It was an offense that was primarily built around the big inning. Walks and homers. Crooked numbers. But you know the old adage? Good pitching beats good hitting.”

“More times than not this season, the Hogs seemed oblivious to this notion. They won close game after close game. Late rallies became their calling card.”

Winning so many games speaks to the team’s strong leadership, from the dugout with coaches like Dave Van Horn to the seniors like Casey Opitz and Kevin Kopps.

Looking back, our 1990 squad could have been stronger in that player leadership department as we headed into postseason. That team had a lot of quiet, do it on the field type leaders and that worked great, until it didn’t.

Maybe we just assumed we would roll through that regional and take our usual spot in Omaha like it was our given right.

Anyone that’s played knows baseball doesn’t work that way. Get a tough matchup with a hot pitcher, a little bad luck or questionable umpiring (see Perry Costello in 2012 versus South Carolina) and dreams can be dashed real quick.

NC State got hot at the right time of the year and Arkansas cooled off after an unbelievably long run.

“It was a team that won in the fringes. That’s hard to sustain,” Musick wrote.

“You fall in love with a team that just won’t quit. But it still doesn’t mask that it’s not a great way to win a natty. Late rallies are fun. Absolutely. But it’s a tough thing to hang your hat on.”

Perhaps the Razorbacks would have won it all had Paulette and Vermillion never gotten injured, or if Brady Slavens had never twisted his ankle, or if Christian Franklin had never gotten strep.

Every year, though, bad things are going to happen.

Some degree of tough luck is impossible to avoid.

Sometimes, you simply run out of magic — and it hurts. In time, however, these players will look back at 2021 with much-deserved pride.