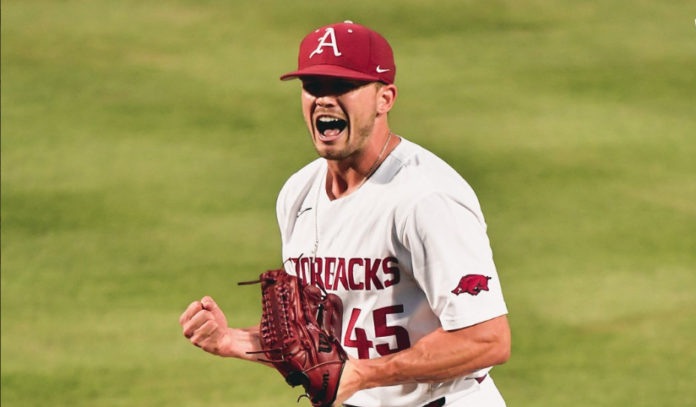 Season on the line.

Backs against the wall.

When Arkansas baseball needed Kevin Kopps the most, he delivered a Razorback sports performance for the ages — right up there with the likes of Darren McFadden going for 206 yards in a road win over No. 1 LSU.

In Monday night’s elimination game against Nebraska, Kopps stepped into a dire situation in the third inning — the earliest the ace reliever has entered a game all season.

Already up 1-0, momentum was swinging Nebraska’s way with another run on the doorstep.

But Kevin Kopps, along with a big-time catch by Christian Franklin, limited the damage to just a run that inning.

The rest of the game proved to be his masterpiece as he gave up only three hits in seven innings while striking out eight and retiring 12 straight Nebraska hitters.

Arkansas’ offense eventually broke through, thanks to a couple of solo homers and huge three-run blast by Charlie Welch, and the Hogs won 6-2 to advance to the Super Regional round against NC State.

“He just kept fight in us and I felt like he just got better as the game went on.”

“We thought we were going to let him go to the seventh, he wouldn’t let us take him out. He had a quick inning and goes back out for the eighth, we think ‘we’ll bring [Patrick] Wicklander in for the ninth.’”

“Then we scored those runs and Kevin said, ‘I’m going back out.’ What an incredible college pitcher.”

You can say that again.

His ERA is now 0.68, the lowest by an SEC pitcher with at least 40 innings since 1981, Hawgbeat’s Andrew Hutchison reports. His 120 strikeouts tie for No. 6 on the UA single-season list.

Kevin Kopps been so good, coming through in the biggest moments for the nation’s best team, that former Razorback Heston Kjerstad went well beyond merely suggesting the man deserves a statue built in his honor at Baum-Walker Stadium:

In response, the fine folks behind the official Arkansas baseball Twitter account went ahead and poured fuel on the fire:

Granted, there’s a bit of hyperbole at play here.

Kopps will likely need to lead Arkansas to its first national title to actually land a statue, but he’s definitely putting together the kind of season that merits this talk.

The talk gets even more heady when looking at a Monday night Tweet by former Arkansas baseball player Carson Shaddy.

Shaddy called Kopps “the greatest Razorback baseball player of all time,” which is high praise considering the likes of Andrew Benintendi, Kevin McReynolds and Jeff King (a No. 1 overall pick in the MLB Draft).

And here’s former Hog Tyler Spoon, also all aboard the build-Kevin-Kopps-a-statue bandwagon:

I agree that no matter what happens the rest of the way, Kevin Kopps has already secured the most dominant individual season in Razorback baseball history. If basing a career on one season, then yes, his case for best Arkansas baseball player of all time is strong.

It becomes inarguable if he help delivers a national championship, considering how many games Arkansas would have lost if not for Kopps this season.

And, as Monday night’s Arkansas vs Nebraska game proved, Arkansas very well might have lost its entire season if not for its ultimate closer.

Kevin Kopps after Arkansas vs Nebraska:

RE: Expectations Prior And Post-Game Feelings

“I didn’t really have an idea how many [pitches] I had left in me. I started warming up yesterday in the ninth and I felt really good, so I had an idea that I would be feeling good today. I feel fine now. I didn’t really feel fatigued.”

“I didn’t really have too many high-intensity pitches. I was going after it pretty well, but I was more focused on just hitting spots today. The more I throw, the better I feel.”

RE: Performance As Game Went On

“That’s usually what happens if you look at my outings. If you look at my stats, my stuff usually starts getting better the more I throw and I start throwing harder and harder too.”

“What an incredible game. Just a nail-biter. Two solo homers to tie that thing up. Christian Franklin has really been struggling at the plate but that at-bat he had, with two outs, I don’t know how many pitches he saw but he ended up drawing a walk and that got it going.”

“I think Charlie knew ‘he just threw a wild pitch and that he would get a fastball and he got it, right down central and he hit it as hard as you can hit it. That’s the loudest I ever heard this stadium. I’ve been in some crazy games here but that was incredibly loud.”

RE: Impact of Charlie Welch

“I’ve been trying to figure out the lineup. Had Charlie in there yesterday, it didn’t go real well. Slavens not hitting right now. Franklin’s not seeing it very good. That’s the middle of our order. I told the coaches this morning that I was going to go with the guys that helped us win big games. I just said, ‘I’m going to bring Charlie in off the bench.'”

“I wanted to have a guy off the bench because I felt like Nebraska was going to just keep matching up after Povich was out of there. And we figured they were going to let him go until he showed them he couldn’t go anymore and he did a nice job early, he stuck it to us.”

“Then when they brought that lefty in with the 2-0 count, I went down the steps and told Charlie, ‘If Casey gets on, you’re hitting.’ A couple pitches later, he was there and ready to go. He laid off a bad pitch and then you saw what he did to the next, he hit it as hard as you can hit it.”

See the highlights of Arkansas vs Nebraska here:

“He was busting our right-handers in, which we expected but he was also pitching away a little more than we expected. He was spinning the breaking ball. He was getting ahead of every hitter. He had some quick innings.”

“With Opitz, he had one home run headed into this game. Now we’ve seen Casey hit a bunch of balls out of here. But I haven’t seen him go down and hit a line drive, right-handed, that hard. It lit our dugout up. He said, ‘hey man, we’re only down one run,’ and for our dugout, what’s new?”

“We’re always down one run in the middle of the game. It was normal territory. We felt like the momentum kind of switched over to our dugout a little bit. Then Kevin kept throwing up zeros, that’s what did it. We knew we were going to break out and Kevin gave us that opportunity.”

“They made all the plays. We had a lot of ground balls, especially with Kevin on the mound. Nebraska had a couple fly balls to the outfield, they hit two or three balls that were hit pretty good.”

“But they made all the plays, Battles had some really nice plays on some slow rollers and some choppers. I just really liked the way the infielders attacked the baseball and really handled it. Obviously not giving many extra bats was also big in winning the ball game.”

RE: Comparing Kevin Kopps to Charley Boyce in 2004

“This is the craziest thing. When Kevin got here, I gave him Charley Boyce’s number. So there’s you a story. Because Boyce was very intelligent, right-handed pitcher and Kevin is the same way. That’s kind of what I do sometimes. But I didn’t know Kevin was going to jump his velocity up in the 90s, because he didn’t do it until the last couple of years. I’ve thought about it a lot and I’ve thought about the regional a lot.”

“I used to take a lot of trash for pitching Charley, but Charley was in the same mold. I’d start walking down to talk to him, and he’d point at me and say, ‘I’m not coming out.’ And it’s almost the same feeling with Kevin except Kevin is too polite to do that.”

“The kid’s a warrior. He wouldn’t let us take him out of the game. Yeah, I know that we have the final call there, but man, this is a team.”

RE: Game-Winning At Bat

“I was looking for a fastball to hit the whole at-bat. He went ball one, then bounced one obviously to the backstop, letting Franklin score. I thought, since there had been 11 balls in a row, Coach Van Horn was going to give me the ‘take’ sign, so I looked down at him and asked if I had the green light and he nodded his head. I got what I was looking for, fastball right down the middle so…. hit it pretty well.”

RE: Hitting With Kevin Kopps On The Mound

“Any time Kevin gets on the mound, we know as a unit, an offensive group, that if we can get a lead then there’s a really, really good shot we’re going to win that game.”

“As soon as he gets on the mound, it definitely gives us a ‘boost’ in the box. To throw the amount of pitches that he threw today, the efficiency, and just getting quick outs and throwing up zeros, it’s good work.”

RE: Feelings Going Into The Super Regional

“It’s unbelievable. My first year here. My first regional, and now we’re making it to supers…. it’s great. I mean, just truly blessed and thankful to be here.”

“I told the team they were amazing. You know, they just keep finding a way, they keep fighting and we get to hang out at least another week.”

“We know that we’re going to play North Carolina State and they’re probably one of the most offensive teams in the country and they’re hot. We figured that’s who was going to win that regional. We all projected it.”

Friday’s game will be televised on ESPNU.