Search
Home Arkansas Baseball Perspective “I Was Kind of a Mess”: Robert Moore Opens Up About Losing... 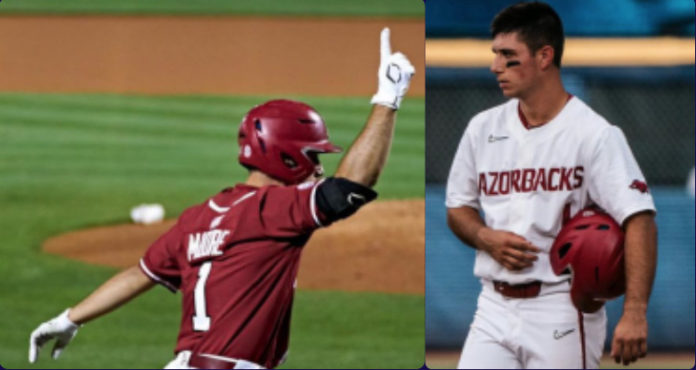 A linchpin of the Arkansas baseball team throughout this wildly successful season has been second baseman Robert Moore.

Over and over, he’s been there when Arkansas has needed him the most. To clinch the regular season SEC Championship against the then-No.9 Gators, for instance, he showed up with a cape on his back and an “S” on his chest to help save Game 2.

Moore hit a solo home run with two strikes and two outs in the eighth inning to tie that game, sending the newly 100% capacity stadium into a frenzy. The Hog faithful couldn’t contain themselves as a celebratory shower of unidentified liquids rained down over the Hog Pen.

This kind of stuff is par for the course with “Big Shot Bob” as the 19-year-old sophomore has become one of the Arkansas baseball fans’ favorites, showing off his power and making clutch hits.

Moore is tied with Brady Slavens for the team lead of 13 home runs so far after hitting just two in his 16-game freshman season. Although just 5’9 170 pounds, he’s shown the muscle as much as anyone else on the team.

Moore has repeatedly shown the clutch gene for Arkansas baseball this season:

Moore’s biggest struggle has been consistency.

He started the season as the leadoff hitter, but more recently has been hitting sixth.

His batting average started high at .375 after 11 games, but dropped to around .250 during an 11-game drought.

His drought earlier in the season saw him drop from leadoff to the 9-hole in the lineup. He went 7-46 with 10 strikeouts over an 11-game span, good for a .152 average.

Seven of those strikeouts came against Mississippi State and he didn’t collect a single hit in the Alabama series.

Moore broke his slump in spectacular fashion, hitting for the cycle against Central Arkansas.

Against UCA, Moore went on to hit a home run, triple, double, and single. He also drew a walk, scored four runs and drove in another six in the 21-8 victory.

If Moore can put it all together and keep delivering for a team that’s favored to win the 2021 College World Series according to  vegasbetting.com, he will be looking at a lifetime of baseball and success.

The early struggles with that transition weren’t so much on the field as internal.

Having grown up in a church-going family, he wanted a Christian walk-up song to represent who he was. But he chose to take a different route.

“I always want to pick a Christian walk-up song,” Moore recently said on the HogPod with Bo Mattingly. “I wanted to coming in as a 17-year old freshman and I didn’t really know the guys in the clubhouse just yet, and I was just trying to make friends.”

“So I was a little timid to do it. I picked a country song and I was beating myself up about it every single day or every single time I’d come up to the plate.”

Moore discussed how his family and faith helped see him through a rocky start to his Arkansas baseball career.

“I was really evaluating my life and my dad is my hero,” Moore said. “Most people look at sports icons or celebrities or musicians and think that’s their hero. But no, your father in heaven and your parents should be your hero. That’s what I’ve learned most from my dad.”

His father is Kansas City Royals’ general manager Dayton Moore. Moore picked up some tricks growing around those big leaguers.

“I would say the biggest thing that I’ve learned to adapt from big league hitters is watching Whit Merrifield’s discipline at the plate.”

The exposure to the big leaguers has rubbed off in Moore as he makes his way closer to pro baseball.

In fact, Moore wanted to go pro out of high school. But something told him Arkansas was the route that he should take.

“I don’t enjoy going to class. I don’t have very many friends. It’s hard to make friends in the locker room this close to the season. And as everything went on, I just realized how much God was looking out for me, especially with the quarantine period.”

“I got to play a little bit of a season… I got to meet some unbelievable teammates and coaches. I got to meet a lot of people from this community and make connections.”

Moore, however, found his mooring in family.

“I would say the field is where I was most comfortable. If I didn’t have my mom, my dad, my sisters, my nana and pap pap, I don’t think I would’ve made it through the first couple months.”

“Emotionally, I was kind of a mess at the time. Truthfully, my identity was in baseball up until a month ago. Luckily things went well for me on the field, because I would have been a disaster mentally and just as a person if they didn’t.”

“I’m thankful for God bringing me through all that,” Moore told Bo Mattingly.

Moore wrapped his whole identity in baseball while he struggled to adjust to the university.

He had a good freshman season that kept him sane. 2021 was looking good at the start, but a slump dampened Moore’s identity and he had to find himself.

“We get this rain delay in the seventh inning, and I’m sitting on the bench like ‘Man, this might be over. I go from the one hole, I’m batting nine hole now. Next thing you know I might not even be in the lineup.”

“When I wake up it’s the first thing I think about. My relationships with people stink, because I’m treating them poorly. Like if I don’t get two hits in a game, I’m just not a good person to people. That’s when I realized my whole identity is wrapped up in this game, wrapped up in baseball.”

Moore had wrapped himself so far into the game that lost himself. His entire world was dependent on his performance.

But he went back to his faith and learned where his identity really came from.

“We had a guest speaker one Sunday, and the guy said ‘Robert, if I take the bat and the ball from you, who are you?’ And literally my first thought is ‘I’m a good hitter’…. and I couldn’t give an answer.”

“I’m sitting there realizing I’m not going good in the one thing I put my whole identity in… and I’m just sitting there thinking, how foolish could I be to think this whole world, this whole universe is all revolved around me and if I get a hit or not?

“And it was just so relieving to know my identity wasn’t in baseball because Jesus paid for it on the cross.”

The realization has allowed Moore to play the game more loose. He realizes better than ever before that his entire life shouldn’t suffer because of he underperforms in a game where all hitter fail more than they succeed.

That, Robert Moore adds, has rejuvenated his joy and put the bigger picture about what really matters into sharper focus.