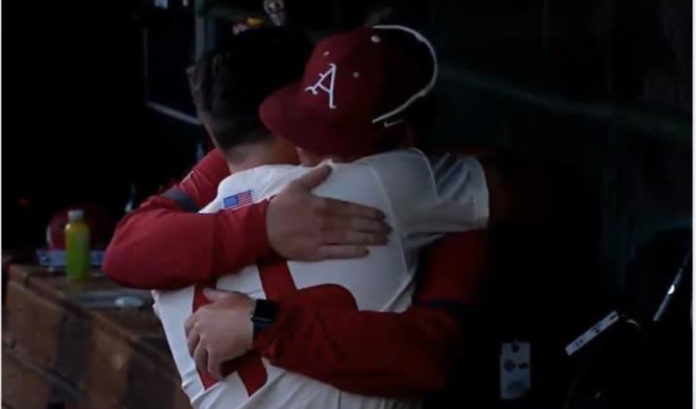 This is not a bad thing.

Granted, with all he’d done for the program, Kopps had no business seeing his last pitch at Baum-Walker Stadium sent so unceremoniously soaring out of the ballpark as it was. But there’s a good reason when he had to leave the field a few seconds later, nearly 12,000 Arkansas baseball fans rose to their feet and gave him an ovation that thundered across the surrounding Boston Mountains.

They knew how special the season they had just witnessed was.

Kevin Kopps starting for the first time this year and going nearly a whole game wasn’t enough to eke out a win against NC State in the rubber match, but he sure gave it his all and came close on a day the offense mostly disappeared.

Without Kopps, this Arkansas baseball team would never have made it as far as the Super Regionals.

The team never would have won 50 games for the first time in the Dave Van Horn era, won its first SEC Tournament title, nor become only the second SEC team to win every SEC series.

Here are some of the individual numbers that show elite Kopps was in 2021:

Kopps allowed the least amount of home runs in the SEC and is top three in both least hits and least walks allowed. Players only hit .157 against Kopps, which is the second lowest mark in the conference.

“I hope that people can see my career and my journey and not think that they have to be some hot-shot or superstar,” Kopps recently said on the Hog Pod with Bo Mattingly podcast. “They can just achieve what they want just by working through things. I think a harder journey is better for you as a person.”

That Kopps believes this to his core was never more evident than what he did after Sunday’s disappointing loss. Before getting to that, though, let’s go back to the beginning.

Growing up in Sugar Land, Texas, Kopps was a good high school player. But nothing close to great.

“I threw 85 in high school. I didn’t really have any offers coming out of high school. I maybe had Air Force and Columbia, but that was really it. There was no JUCOs, no smaller D1s. And I emailed Arkansas. [Coach Tony Vitello] came out and saw me.”

“I just think it was like God putting his hand in there because I don’t think I should have ended up where I am.”

No doubt, his journey started from humble beginnings. I’m sure some of those schools who passed him over feel a bit foolish watching what is going on this year. He almost didn’t make this season happen, considering his senior year was cut short in 2020 by COVID-19.

“I didn’t like where I was,” Kopps said. “I called coach [Matt] Hobbs I think after the season asking if he wanted me to come back, or if I just needed to try and sign a free agent deal somewhere. Of course he thought I was stupid for asking that question.”

Pitching coach Matt Hobbs made the right decision in telling Kopps he should rejoin the Arkansas baseball program.

I remember telling him that we want him,” Hobbs said on the podcast. “It’s a tough conversation to have with a kid saying ‘Am I welcome back if I want to come back?’ Now it sounds like a crazy conversation to have, but at the time it was pretty relevant.”

“He hadn’t pitched all that well, he was probably thinking if I go sign this thing for $1000, ‘Will I get a chance to play?’… It’s a difficult conversation to have. We obviously wanted him back, but I could see where he was coming from also. I didn’t hesitate at all in terms of ‘You’re going to be welcome back here. You’re a captain. If nothing else, you’re going to bring incredible leadership and the things you do that are very important off the field.’

“I also thought he could rewrite the script a little bit. I knew what we got in ’20 wasn’t Kevin Kopps,” he said, referring to Kopps’ 8.18 ERA that year.

In 2021, Kevin Kopps overcame any doubts about his ability to deliver on this potential as a Razorback. He made Hobbs and Arkansas baseball coach Dave Van Van Horn look like geniuses for bringing him back.

Still, it was a rocky five years previous to getting to this point. He had so many obstacles that he had to overcome.

“My entire career here has been kind of up and down,” Kopps said.

“I redshirted, played, had Tommy John, played, and then COVID. I’m on a good ‘playing every other year’ sort of thing right now. Last year my relationship with God wasn’t where it needed to be, so I started with that.”

“Then I just had a lot of time to myself to rebuild myself and really focus on baseball. Baseball and my relationship with God is really what I focused on over the summer.”

“I just trusted the process in that and he blessed me more than I could’ve imagined.”

Kopps leaned on his faith to continue to recover from the Tommy John surgery on his elbow he had in 2018.

“And then like the whole time you don’t want to hurt yourself again. You’re paranoid throwing your bullpens, because your arm doesn’t feel real great until I think two years after. It doesn’t feel like I’ve had surgery, but the first year of recovery, it was always sore.”

“You always feel it, it’s always in the back of your head.”

Kopps had to miss Arkansas baseball’s 2018 run to the finals in Omaha because of his injury. As a player, it is very tough to not be able to compete with your teammates.

“In the moment, you’re just like ‘Man this sucks’. But you keep pushing and trust in God and trust in the process in baseball. Whatever is planned for you, you’ll come out in that plan.”

All of the obstacles have made Kopps better, and made him work harder. He wasn’t always as happy with where he is now in baseball and personally. So, he worked hard to reinvent himself.

“I stopped trying to be someone that I wasn’t,” Kopps said.

How Kevin Kopps Reinvented Himself

Hobbs played a big role in Kopps’ reinvention, too.

“I’m a big-time over-thinker and [Matt Hobbs] helps to take the things I think about too much out of the game,” Kopps said.

“It helps to work through those things and I talk to him when I need help with stuff. The guidance that he gives is unmatched.”

The extra time off in 2020 to restore his previous throwing style proved to be a boon.

“If we play out the 2020 season, he doesn’t start throwing a two-seam fastball, which is really what the biggest change was — being able to get a pitch that he’s more comfortable throwing,” Hobbs said.

“I don’t know that he does that, he probably just makes what he has to get through the season instead of trying to remake himself. I think the more time he has to himself, the better he was able to do those things. Sometimes getting away from the people trying to fix you is the best thing you can do as a player.”

“I got to watch him throw a 35-foot short box every Thursday before a conference series and him trying to figure out why the ball isn’t spinning exactly correct. He’s a perfectionist still at the end of the day. It’s probably the funnest thing for me as a coach, watching a guy that’s tried everything, tried it again, and then just said ‘I need to be myself.’”

Kevin Kopps improved his pitching over the summer. He could tell it was going to be different this year.

“I think I started to realize it was going to be different when I was throwing bullpens in the summer,” Kopps said.

“I went back to my two-seam and my old arm action and stopped trying to throw everything over the top. Everything started to click. I started to locate better. I think the problem with me my redshirt year, I just didn’t do very good, or my Tommy John year, I just wasn’t happy with that season.

“I wasn’t very consistent and I think that’s what makes good players great.”

Kevin Kopps Says Giving up a Homer is “Almost Relieving”

Kopps held himself to such consistently high expectations this season, and with a few brief exceptions delivered on them, that he playing imperfectly ended up as a kind of therapy.

“My first batter I faced in that last game against Tennessee, I gave up a home run. It’s almost relieving, that I finally gave up a run for the first time in a while, so I don’t have that pressure anymore.”

“I started to get back into a rhythm after that.”

That rhythm was shattered in the ninth inning of the season’s last Arkansas baseball when NC State’s Joses Torres blasted a home run off what would be Kopps’ last pitch.

As Kopps walked off the field, he fought back tears before meeting the embrace of his coaches.

At that point, the writing was on the wall. But they hadn’t taken what they saw all season for granted.

“When you’re out there and you’re watching him, you can catch yourself a little bit like ‘Wow I better enjoy this,'” Hobbs said. “With a guy like that you’ve got to sit back and say ‘This is incredibly special what I’m watching and I need to enjoy it because you don’t get guys like this very often.'”

Perhaps the most incredible thing to witness arrived after the game had ended, after Kopps’ Arkansas baseball career was likely over.

Kevin Kopps, despite experiencing the most gut-wrenching loss of his college career, knew hundreds of kids were just as gutted as he was after the loss. He also knew if some of them could get a photo or autograph with him after the game, it would make the loss a bit more palatable.

So he went out to greet them after the game. And he stayed, by himself — for a whole hour until no child had to go home disappointed they didn’t get their hero’s signature.

As good as Kevin Kopps’ wonderfully miraculous, sublime and otherworldly Arkansas baseball season, it wasn’t the by-product of a Terminator who nearly reached baseball immortality.

No, as his last game showed, Kopps was plenty human.

Someone we can all relate to.

In the end, he went out looking way more man than machine, among the fans who will always love him.

This story was co-written by Braden Sarver and Evin Demirel