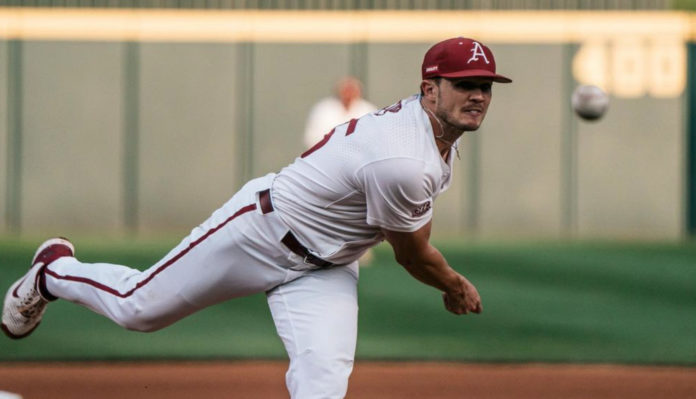 The adjectives to describe Kevin Kopps’ season are endless.

His ability to execute pitch after pitch in the most important moments of seemingly every Arkansas baseball win is unrivaled not only in Fayetteville but across all of NCAA baseball. He’s proven to be the MVP of MVPs with what he means to this Razorback baseball team and their run to Omaha.

How does he do this game after game against the nation’s toughest schedule for the nation’s top team? He’s not exactly facing men’s beer league hitters, though he puts up numbers that look as though he is.

Hitters are baffled. Coaches are mesmerized. Teammates are indeed gracious.

Without question, there is zero chance the Hogs are in their current position without him. Like Jordan and the Bulls or Brady and the Patriots, although surrounded by plenty of talent, Kopps is the straw that stirs the drink for the 2021 Diamond Hogs.

High accolades, sure, but he’s that important.

Notice how the offense kicks it up a notch when he’s in the game? Nebraska fell victim to the latest offensive uptick during Kevin Kopps’ instant classic of an appearance in the regional final on Monday.

The offense finding a groove while Kopps is in the game has boosted his win total to starter-like levels. Twelve wins in 31 appearances for a full-time reliever is, to put it in technical terms, craziness.

The same can be said for the energy in the ballpark when he trots in from the bullpen. He never hits, rarely fields a batted ball, but his presence influences every aspect of the game.

Opposing coaches have to game plan for him by figuring how to attack him offensively and match up their own pitching to prevent Arkansas from gaining a lead. Entering Monday night’s game, Nebraska players said all the right things about having a chance once Kopps entered the game, but their actions and outcomes didn’t match.

Frustration at the plate. Tears all over little kids’ faces. Tension on each incoming pitcher as they knew if they surrendered a single run, the game is likely over.

Seriously, though, how is he that dominant and reliable?

The Razorbacks have had their fair share of dominant closers.

I was fortunate enough to play with Phillip Stidham in the early 1990s. Stidham was a two-time All American (1990 and 1991) and still holds the school career saves record at 33. He also has the career record for appearances at 105 over three seasons.

Stidham, a converted infielder, was a submarine pitcher with a bulldog attitude and high end velocity from that down under arm slot and a wipeout frisbee-like slider. Much like with Kopps, it was exponentially more times than not “Game Over” when he entered from the pen.

The Razorbacks won a remarkable 138 games in the three seasons he closed for us.

More recent Arkansas baseball fans will remember banner seasons by closers Colby Suggs in 2013 and, of course, Matt Cronin in 2018 and 2019.

Both of those guys dominated with big-time fastballs and tenacious intensity that put fear in the hitter’s mind.

Cronin even used to require a couple of slaps to the face prior to sprinting out of the pen to slam the door on opponents’ rallies. Looking at others, Barrett Astin in 2012 and Tim Dietz in 1985 were no slouches. Except for Suggs, everyone of these served as the lockdown closers of College World Series teams.

Then there is Kopps.

On the outside, there is no ferocious snarling staredown of the opposing hitter. No stomping around the mound. No Al Hrabosky “Mad Hungarian” psyche jobs. And definitely none of that mumbling to yourself trash talk that has been popularized by a fellow SEC West school and Twitter.

Kopps operates as the most non-closer closer I’ve ever seen. He so often enters the scene with a nice, leisurely jog, something approaching a wry smile on his face. No German speed metal music to get him all hyped. Fans have seen a fist pump or two this season with an occasional primal scream but most of the time it’s a measured and under-control stroll to the dugout after the big out.

The biggest on field reaction you may see is a spin out after he misses a spot with a pitch. He seems to gaze out over the batter’s eye in centerfield to reset himself mentally and make an adjustment to get right back into the strike zone. No sign of bad body language that baseball fans and definitely opposing hitters see from so many pitchers (some Razorbacks included).

That cool-as-a-cucumber mental makeup Kopps exhibits may be just as big a factor in his success as the nastiness of his arsenal of pitches.

Never getting too high or low helps him navigate what they call in the big leagues a “high leverage” situation: Tight score. Runners on base. Need three outs or three innings. Has his best stuff or just ok stuff… this guy handles himself the same.

It’s a huge reason Kopps has become the most dominant pitcher in college baseball in decades. Maybe ever.

Truly remarkable for such a lightly-recruited walk on who missed a season recovering from Tommy John surgery and frankly, bounced back from what was a really poor start in 2020 before the pandemic canceled the season. Wisely, the redshirt senior from Sugar Land, Texas reverted back to what provided success versus trying to be something he’s not.

But make no mistake, he’s what I would classify as a power pitcher — just not of the fastball variety.

In an era where a 95 MPH heater is commonplace and spin rate is the buzzword du jour, Kopps has carved out a niche with a combination of complementary pitches that opposing hitters walk away from thinking he’s some kind of sorcerer.

Chief among those pitches is the “The Thing,” which isn’t really a true cutter but it’s not a true slider either, as it lands somewhere in between. But it’s still a power breaking ball, thrown with fastball intent and such late movement.

When “The Thing” is on, the hitter cannot put the barrel on it. That pitch, seen in the video below, has completely befuddled and occasionally embarrassed hitters this season. Really good hitters too.

Advanced hitters try to determine spin out of the pitcher’s hand to determine breaking pitch or fastball and swing or lay off accordingly. For most pitchers, that spin is completely different and the better pitchers have pitches that closely align.

Result: A sackful of strikeouts and awkward swings.

But Kevin Kopps doesn’t have this kind of success because he’s a one-trick pony. He also wields a solid 90-93 MPH two seam fastball that he can spot both sides of the plate that keeps hitters honest. Especially when he locates it inside to a right hand hitter to prevent them from leaning out over the plate to try and get on the offspeed pitches darting down and away.

Kopps also possesses a get-me-over curveball and a controlled slider that he can effectively land for a first pitch strike or when he’s behind in the count. Hitters simply cannot hunt a specific pitch because all of these various pitches are swirling around in the back of their head as they try and put the barrel on the baseball.

All around, it’s a pretty tough task.

The 2021 Kevin Kopps is the complete pitcher. He has every trait one could want in a college hurler: an array of nasty pitches, mental toughness, a healthy arm/body, maturity and a heckuva athlete (Kopps also possesses the highest vertical jump on the team, for example).

That is a lethal combination at any and every level.

All the postseason accolades Kopps has received are undoubtedly earned. If he isn’t named the Golden Spikes winner (go vote Hog fans) and/or the Dick Howser Trophy for the best player in college baseball, it will be a travesty.

But if I had to guess, he would trade all that to be on that mound tossing “The Thing” up there for the final out in Omaha.

He dang sure deserves that kind of ending.

To learn more about Kevin Kopps and his inspiring story overcoming injury and hardships, listen to this interview: