Search
Home Arkansas Baseball “It Absolutely Ripped My Heart Out”: Carson Shaddy On Not Repeating As... 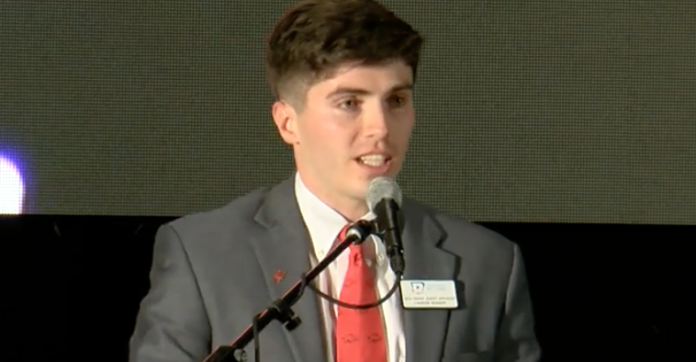 From freshman walk-on to standout scholarship player, Carson Shaddy had an unforgettable Razorback baseball career. The Fayetteville native played every position for the Hogs except first base, shortstop and pitcher.

On Friday night, in an emotional tribute to Hog baseball coach Dave Van Horn, Shaddy revealed the individual baseball accomplishment that meant the most to him: getting the team captaincy in 2017, his redshirt junior year.

The year didn’t go as planned. His numbers from the previous season declined. “After a long season, I found myself baffled at how I performed,” Carson Shaddy recalled. “I found myself doing a lot of soul searching to get ready for 2018.”

Then, he got the bad news: He would not repeat as captain for his senior season. “It absolutely ripped my heart out knowing I was not going to have the honor of wearing the ‘C’ on my chest.”

Soon after the vote, Dave Van Horn called Shaddy into his office for a talk.

“He saw how badly I was hurting, even though I swore to myself I would not show it one bit,” Shaddy said. “The piece of advice he told me will stick with me the rest of my life. Coach told me it’s not about the opinions others create of you.”

“It’s about what you think of yourself and what you do next. He told me to prove to my teammates wrong and show them the leader that I was.”

Shaddy wasn’t the first player to learn important life lessons from Van Horn. The 58-year-old coach’s ability to inspire hundreds of young men to dig deep within and overcome their own struggles is perhaps the biggest reason that Van Horn was inducted into the Arkansas Sports Hall of Fame on Friday.

Oh, sure, there are all those College World Series appearances, too.

Carson Shaddy helped lead the Hogs to two of those — one in 2015, and the other during his best season in 2018. That year, as a senior, he came through on his resolution to lead despite demotion from captaincy. Shaddy delivered a career year, batting. 331 with career highs in home runs (11) and RBIs (43) for an All-SEC First Team selection.

But those numbers paled in significance to the bigger picture: “Coach Van Horn has a way of turning boys to men by teaching accountability, how to lead and how important the relationships in our life really are.”

“Coach was constantly pushing me to be a leader, he added. “He saw something in myself I did not see in myself.” The game “was more about the lives I touched than the stats I put up. It was about the people around me, rather than my own personal successes.”

In the end, after all, those relationships are all players are left with.

The game lasts only so long. For Shaddy, the end came sooner than expected. He had played the end of his Razorback career with “pretty much a completely torn elbow for a couple years,” Van Horn said. Though Shaddy was drafted in the 10th round by the Washington Nationals, a diagnosis of his elbow issue kept him from staying in the pros. “He was devastated,” Van Horn recalled. “But he never complained.”

During Dave Van Horn’s own acceptance speech, he made a point of trying to help out his former player (as well as Shaddy’s wife, Sarah) one more time.

“He’s going to be a great employee,” Van Horn said, as Carson and Sarah cracked smiles. “If anyone’s looking for somebody, that’s the guy right there. And he could probably sell anything, so I would get ahold of him. I needed to mention that.”

“Carson played the game the right way, man. The guy played it hard, and he played it with a smile on his face. I just appreciate you being a Razorback. I think we all do.”

Listen to other stories and hat tips Van Horn gave below:

Carson Shaddy was joined by a few select others in giving tributes. Check out what Van Horn’s mentor and predecessor, Norm DeBriyn, had to say: