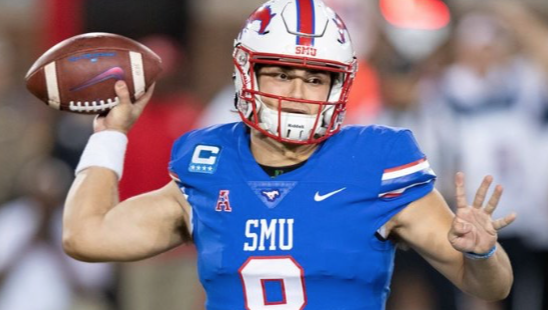 This has been the season of the quarterback transfer.

More than a dozen quarterbacks have transferred to or from high-major Division I schools. Early on, of course, Razorback fans salivated over the prospect of getting Clemson’s Kelly Bryant. We know how that ended.

In the end, Bryant left fans across the nation scratching their heads. He chose to play for a university with students forever marring it with this horrifying creation:

Bryant’s decision, unsurprisingly, was among the biggest of the transfer season. In fact, ESPN ranked it as the No. 2 most influential QB transfer, right behind Jalen Hurts’ scramble away from Alabama to the Heisman Trophy factory that has become OU.

Here are the next four:

No. 3: Jacob Eason (Georgia to Washington)

After Bryant, many Arkansas fans wanted to see Hogs coach Chad Morris land another coveted dual-threat quarterback. Buechele, with his Texas background, seemed like the most likely prospect.

On the surface, it seems unlikely Buechele would want to transfer to a place with competition from someone as experienced as Hicks. Still, stranger things have happened. Sometimes these transfer quarterbacks actually relish such a challenge, even when heading to a less prestigious program.

Take, for example, Brandon Wimbush. Wimbush left Notre Dame for UCF, where he will have to fend off rising sophomore Darriel Mack, Jr., who started three games for Central Florida at the end of the season.

Plus, there’s a recent Buzz 103.7 interview in which Chad Morris talks about Ben Hicks, then adds “we’re always in the quarterback market.”

So, here’s what ESPN’s Mark Schlabach had to say about Hicks’ transfer:

“Hicks, who is SMU’s all-time leading passer, is transferring to Arkansas, where he will be reunited with former Mustangs coach Chad Morris. Hicks started two seasons under Morris at SMU and flourished in his hurry-up, spread offense. He set school records for career passing yards (9,081 yards), passing touchdowns (71), total offense (8,977 yards), completions (718) and touchdowns responsible for (74), while starting 33 games for the Mustangs. He wasn’t as effective under current SMU coach Sonny Dykes and briefly lost his starting job this past season. The Hogs are expected to lose both of their quarterbacks from last season — Cole Kelley and Ty Storey, who combined for 11 starts during a 2-10 campaign.”

Once the good folks over at 247Sports saw this, they chimed in with their own take on ESPN’s take. (Because, really, there are only so many new things that can be said under the sporting sun.) Here’s 247Sports’ breakdown of Hicks’ transfer:

“Home run acquisition for the Razorbacks, who basically hand-picked him from the Mustangs as the program’s all-time leading passer. After two wins in his first season, Arkansas coach Chad Morris needed a playmaker at the quarterback spot and he has it in Hicks, someone he’s familiar with as the facilitator of a near identical offense. This move won’t make the Razorbacks a contender in the SEC West next fall, but it should lead to bowl eligibility with season-long stability under center.”

That’s a strong prediction — likely something in the realm of six or seven wins for the Hogs. Assuming Hicks ends up as the starter, how well would he have to throw in order to improve Arkansas by four or five wins?

Eric Harris of ArkansasFight.com throws out 2,500 yards and a 55% completion rate as the kind of B-grade performance that will make most Hog fans happy. Essentially, something similar to Brandon Allen in 2014 or Casey Dick circa 2008 (without Dick’s 13/14 TD/INT ratio).

In referencing other QB transfers, Harris ends: “So for 2019, expectations [for Hicks] probably fall in the line of this. A Wilton Speight/A.J. Bush type season would be the low end. Most likely, I’d expect his numbers to fall in the line of K.J. Carta-Samuels. And exceeding expectations means Hicks is touching 3,000 yards and 20 touchdowns on the year.”

Want more about Razorbacks football and adjusting to the SEC from Ben Hicks himself? Check out the below related posts: