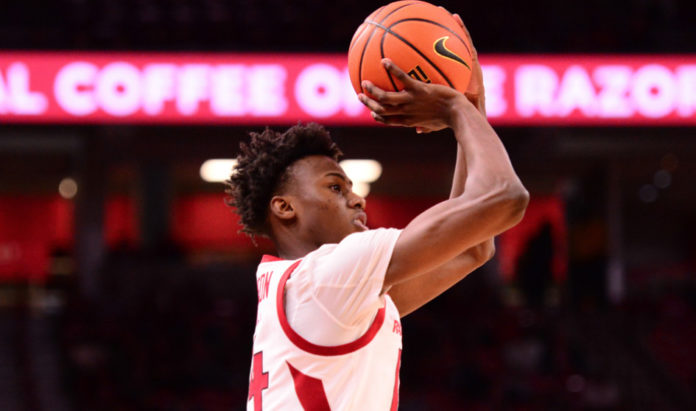 A briefly sputtering Arkansas basketball team appears to be back on track after a 81-55 victory over Elon last Tuesday. Keeping that momentum going won’t be easy, though, as the Hogs hit the road for their first SEC matchup of the season against a defensively-potent Mississippi State squad. The Bulldogs have won three games in a row against Georgia State, Furman, and Winthrop, holding all three opponents to an average of 59.7 points per game. On the season, they’re only allowing opponents to score 61.4 points per game, including three games of holding opponents under 50 total points, a feat Arkansas has yet to accomplish in 12 games this season.

ESPN’s Basketball Power Index currently gives the Bulldogs a 77.7% chance to beat the Hogs on Wednesday afternoon in Starkville, by far the most overwhelming statistical odds the Razorbacks have faced all season. The last time ESPN predicted against Arkansas, the catastrophe vs Oklahoma happened.

Still, the Hogs are coming off arguably their most impressive game of the season so far. The 26-point margin was the second-largest margin of victory on the season behind their 37-point win over UCA.

When Mississippi State Has the Ball

The Bulldogs are an experienced team, led by junior guard Iverson Molinar. So far this season, 95% of available minutes have gone to non-freshman, including nearly 61% of those minutes going to juniors and seniors, according to sportsrefernce.com. Age and experience aren’t always exact indicators of good teams, but they generally lead to more composed and disciplined teams, especially when those teams are playing at home.

Offensively, Molinar is the main focus for Mississippi State. The 6-3 guard is averaging 13.9 points, 4.4 assists, and 3.3 rebounds per game in over 32 minutes per game. The Bulldogs are at their best when Molinar gets comfortable and shoots efficiently from the field. During their nine wins so far this season, he’s shooting nearly 53% from the floor including 37% from 3-point range. In losses, however, he’s shooting under 31% from the field and only 19% from long range. Bothering Molinar enough to make him uncomfortable without fouling will be the biggest key for the Hogs on Wednesday.

The Bulldogs also have a pair of 6-10 forwards patrolling the paint in senior Garrison Brooks and junior Tolu Smith. These twin towers average 6.6 and 8.3 rebounds per game respectively. This duo is a major reason why Mississippi State is the 4th best team in the country in allowing the fewest total rebounds per game to their opponents (only 27.6 rebounds allowed). Meanwhile, the Hogs are averaging roughly 38.8 rebounds per game so far this season — 73rd in the country.

The Razorbacks have greatly improved their 3-point shooting over their last few games. At one point early in the season, they went on a three-game streak of shooting 16% from distance. Over their last 3-game stretch, they have improved to 35% as a team, including nearly 39% against Hofstra and 36% against Elon. Mississippi State is allowing opponents to shoot nearly 34% from distance on the season, ranking them roughly 234th in the nation in 3-point defense. Arkansas will do well to take advantage of this weak point in the Bulldogs’ defense.

One of the more impressive stats for Mississippi State is their ability to defend without fouling. They are currently allowing the 5th fewest free throws in the country at 11.2 per game. For context, Arkansas is currently allowing opponents to shoot over 15 free throws per game, good for 129th in the country while attempting a 12th ranked 22.8 free throws per game themselves. If the calls aren’t going their way in Starkville and the Hogs can’t make a living at the free-throw line, they’ll need to be smart in their shot selection and efficient from 3-point range.

Arkansas vs Mississippi State: What to Watch For

Arkansas basketball fans have seen an increase in usage and production from a pair of Robinsons over the last couple of games: Jaxson Robinson and Khalen (KK) Robinson. The two guards have combined to average 21.5 minutes per game over the last two contests after combining for roughly 14 minutes per game previously.

In their newly-found roles, KK Robinson and Jaxson Robinson have combined to shoot 53% from the field, 53% from behind the arc, and 100% from the charity stripe. The efficient shooting of these two guards recently has played a major role in the aforementioned uptick in 3-point shooting for the Hogs as a whole. The Robinsons have also combined to average 14.5 points, 3 assists, and 1.5 rebounds per game across their last two contests. The rotation construction will be an interesting situation to monitor moving into conference play.

While Arkansas seemed to turn a corner in their dominating win over Elon last week, the talent gap between the two teams has to be taken into consideration. Have the Hogs truly found a rhythm that will continue into SEC play, or were they the beneficiary of hot shooting against a less talented team?

We won’t know the answer to the question until they’ve faced an SEC team or two, but for the time being, we’re assuming it’s a little bit of both. The Hogs will show great resolve after a poor start, but it’s not enough to win their first conference matchup on the road, just as ESPN is predicting.

Arkansas vs Mississippi State How to Watch