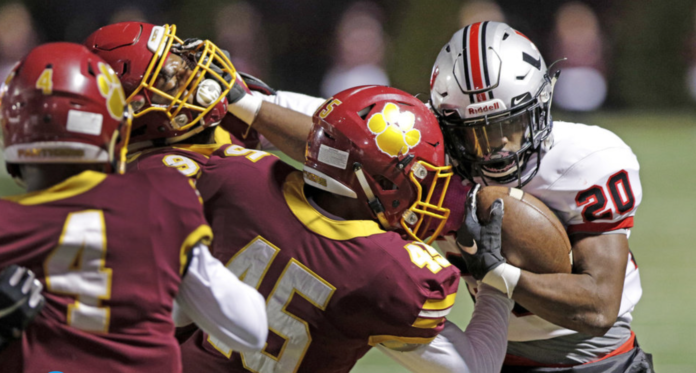 Over the decades, Arkansas football has taken plenty of elite talent from the Tulsa metro area. Felix Jones, a 2005 alum of Booker T. Washington High School, ranks near the top. Jones went on to set the Arkansas rushing record for yards per carry (7.6) and get drafted in the first round of the 2008 NFL Draft along with his partner in crime, Darren McFadden.

Arkansas hasn’t picked up a Tulsa metro tailback at Jones’ level since then. That streak may be end soon, though, after Arkansas recently received a commitment from AJ Green, a 4-star running back with molten speed who racked up 939 yards and nine touchdowns last season while averaging 8 yards per carry — despite battling injuries.

Green has already drawn a lot of comparisons to Felix Jones. Both are considered top 5 players in the state of Oklahoma. Jones was the third-rated player in the state as a senior, while Green typically lands between No. 3 and No. 5 depending on the outlet.

Both are rated similarly and about the same size as high school seniors, with Green being listed just three pounds lighter going into his senior season.

Both tailbacks read holes well and make the opponents miss, as you can see in the highlight below:

“Green has quick feet and exhibits a ton of patience when he’s in the backfield,” Rivals recruiting analyst Sam Spiegelman wrote. “He makes sharp cuts and is very elusive in the open field. He’s patient and is waiting for his blockers to make their move and bursts through seams as they unfurl. Once Green makes it into space, he’s difficult to wrangle and not only slippery, but can run with authority, moving and always falling forward.”

You’ll see the same traits in these highlights from Jones:

Green, however, takes it to a level Jones never did when it comes to power near the goal line and pure, unadulterated, mind-bending speed.

Compare this to Green, who’s already been been clocked in high 4.4’s without the benefit of collegiate plyometric training. Green is especially lethal in the open field. He runs a 10.38 in the 100 meter and a 21.46 in the 200 meter.

As Hog recruiting writer Otis Kirk puts it, “He’s got that Darren McFadden deal in the fact that if you’re even with him, you’re gonna be behind him in a minute.”

“He’s going to leave you behind. I mean, he can fly and he’s got good size,” Kirk said on Pig Trail Nation.

Green has all kinds of giddy up in his step when getting out in the flat. “He runs to his side nearly as fast as he does moving ahead,” Spiegelman note. ” He has great speed getting to the edge with the ability to beat hosts of defenders as he races to the outside.”

Green has” traits of both. He’s kind of got the best of both,” Kirk added. And that’s, that’s not a bad thing to say about a running back — to have the best of Felix and the best of Darren.”

The Hogs now have three of the top seven ranked players in Oklahoma committed in the 2021 class. Green is ready to help recruit the other top targets in the region.

For a breakdown on Green, Kendal Briles’ offense and the Oklahoma recruiting scene, watch this video by Tulsa-based RJ Young: