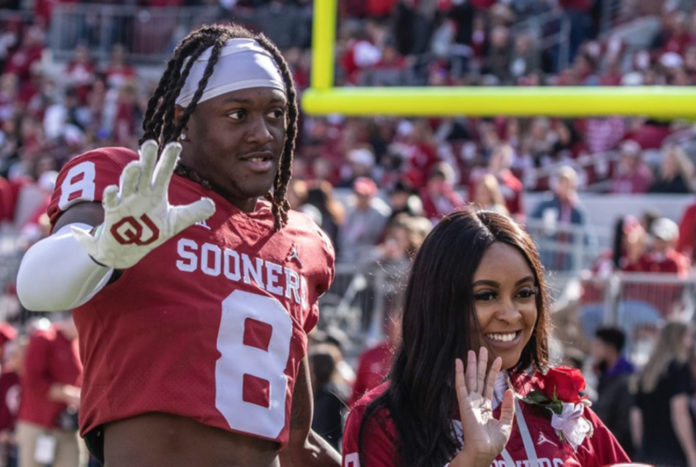 A few months into 2021, after the Arkansas spring football game, borderline star Mike Woods left the Razorbacks after three seasons to join what he felt was going to be a powerhouse Oklahoma football squad.

The decision didn’t exactly go over well with some Razorback fans. At the time, it looked like it would be a big loss given Woods’ status as a clear No. 2 wide receiver behind Treylon Burks, and one fan went so far as to share a deranged ACL tear fantasy directed toward Woods.

“It was just something that was on my mind and I felt it was the best move for my career to just find another opportunity,” Woods said in August. “And as a wide receiver, you look at OU every year putting out these big numbers and every receiver wants to be in an offense like this.”

As much as some Razorback fans hated to admit it, though, Woods’ reasoning was sound enough. At the time, it appeared the Sooners had a solid shot at making the College Football Playoffs and Woods would be catching passes from a Heisman hopeful in Oklahoma quarterback Spencer Rattler.

“In my opinion and in a lot of people’s opinion, (Spencer Rattler) is the best quarterback in college football,” Woods said during his introductory press conference. “He’s very talented. Makes very good throws. He’s confident. And that’s something that every quarterback needs. And [Sooners quarterback] Caleb (Williams) does things that you’ve never seen before. Both of those guys are very talented and I’m very excited to be playing with those guys.”

It’s almost certain Mike Woods envisioned great things for this season – perhaps an All-Big 12 selection on his way to a Sooners conference title and playing in front of the bright lights in a College Football Playoffs game. All of that would have raised his NFL draft stock, too.

None of that happened, though.

The 2021 Sooners became the first Oklahoma team since 2009 to fail to reach the Big 12 Championship game.

Meanwhile, Woods got injured, sat out a few games and didn’t break into the Sooners’ deep receiving corps to the extent he probably would have liked. He finished in the “honorable mention” category for the Big 12 Newcomer of Year after putting up less impressive stats as a Sooner than he had in his two seasons as a Razorback:

And that talk about Rattler being the best quarterback in the country?

It vanished as fast as former Sooners coach Lincoln Riley hopping on the next train to L.A.

How Mike Woods Would Have Helped 2021 Razorbacks

Yes, the Sooners finished with a better record at 10-2 than the Razorbacks at 8-4, but that’s almost a wash considering how much stronger the SEC is than the Big 12. Indeed, had Woods stayed at Arkansas, he very well would have made the difference in one or two extra wins considering the Hogs could have used extra offensive spark in close losses to Ole Miss and Alabama. It’s not outlandish to say a 2021 Razorbacks team with Mike Woods (and a healthy Jalen Catalon) would have won 10 games.

“Burks required so much more attention than the previous year that Woods could have pulled a chair up on the opposite hash, sat down with a book and would have still been wide open,” Kent Smith wrote for SI.com.

“With Jefferson’s ability to throw the deep ball, Woods could have caught NFL paycheck after paycheck as he ripped up single coverage across the SEC.”

Instead, Woods’ lack of shine this year has led to his NFL Draft stock actually sliding, from a peak of No. 543 overall to No. 588 according to NFL Mock Draft Database.

In hindsight, based on what Woods said he wanted to accomplish, most of the metrics point to Mike Woods’ decision to transfer to the Sooners as a bad one. Still, that didn’t stop him from sharing some love for his former team when he recently retweeted this Tweet from his former wide receivers coach:

This shows that Woods, despite getting blasted in some circles, harbors no ill will toward the Arkansas football program. His former Razorback teammates, after all, showed plenty of support in the wake of his announcement. KJ Jefferson even encouraged Woods to go get that money.

I think most fans are fine with the idea of players transferring if their reasoning is sound, as Woods’ was at the time. They see that coaches move all the time based on business reasons and understand that players increasingly think the same way. That’s why very few fans held it against former Hogs coach Justin Stepp (who also recruited Burks) when he announced he was leaving the Razorbacks for his home state South Carolina Gamecocks.

But Stepp made that decision relatively early in the off-season while Woods waited until after spring game. It’s that timing that most fans have an issue with. In the big picture of things, though, it’s not that big of a deal. The fact Arkansas didn’t suffer too much in his absence definitely helps any old wounds heal more quickly.

The transfer portal is going to take more borderline to actual star Razorback football players away in coming years. As beloved as Sam Pittman is, there’s simply no getting around that. The objective shouldn’t be to prevent this from happening altogether.

Instead, the key is to minimize the effect by annually bringing in transfers who help the team, in total, more than what they lost in the portal. In 2021, the Razorbacks nailed it, bringing in transfers like receiver Warren Thompson and especially the defensive linemen in Tre Williams, Markell Utsey and John Ridgeway who made a huge difference. In fact, I would venture to say without those linemen the Hogs lose games against Texas A&M, LSU and Mississippi State.

So, in 2021, the transfer portal essentially won more games for the Razorbacks than it cost them.

The key is to do that every year. I believe the coaching staff can use Mike Woods’ departure as an example of the grass not always being greener on the other side when future Razorbacks consider leaving for more prestigious programs. Perhaps his example helps prevent future departures and, in this way, Hog fans should actually be thankful towards Woods (they should be, anyway, given how well he played during those three down years).

It’s also worth noting that at Arkansas Mike Woods built up a YouTube channel of nearly 5,200 subscribers which, in theory, should have been a platform to generate NIL money from sponsorships and the like. Woods made a couple of videos highlight his move to Norman (even showing off his apartment bedroom full of Razorback images and memorabilia). It seems possible, though, that someone in the Sooners coaching staff wasn’t a fan of his side hustle or Woods, inexplicably, lost interest in marketing the story of his life.

Either way, the Woodville channel hasn’t been updated since June.