Search
Home Arkansas Football Perspective KJ Jefferson’s Biggest Weakness of 2021 a Far Cry from What It... 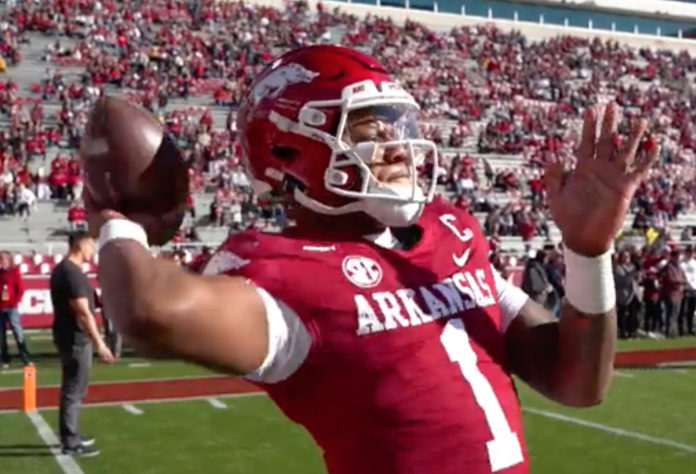 The Southeastern Conference would not be the nation’s most elite football conference without the sterling quarterbacks who populate it year in and year out. This year, at the top of the pecking order we have Bryce Young and Matt Corral, both of whom are high on the Heisman Trophy watch list.

Young is currently -220 with Vegas oddsmakers and is the current favorite to win the trophy while Corral has slid due to solid but not spectacular play the last month or so. Toss in the reinvigorated Hendon Hooker at Tennessee, the mercurial Bo Nix at Auburn, the stat stuffer Will Rogers at Mississippi State and the somehow-gets-it-done Stetson Bennett, IV at Georgia and the league is full of top notch signal callers.

Few folks outside of Arkansas, however, are really talking about the incredibly productive, versatile and steady season redshirt sophomore KJ Jefferson had for the Razorbacks. His overall QB efficiency rating of 168.68 is the best in Arkansas football history, ahead of Brandon Allen’s single-season record of 166.48 passer rating in 2015.

And when it came to how he did against SEC teams, he has set the standard as well:

Jefferson finished the regular season by completing 184 of 275 passes for 2,578 yards, 21 touchdowns and only three interceptions. He also rushed 126 times for 554 yards and five touchdowns with several clutch scrambles. I can think of three other near touchdowns with Treylon Burks snag at the ½ yard line against Ole Miss, Warren Thompson’s overturned touchdown against LSU and Burks’ breakaway stumble against Missouri.

Jefferson is one of five FBS passers to throw for 2,500+ yards and 20+ touchdowns while rushing for 500+ yards and 5+ rushing touchdowns in 2021. That’s big time especially playing against the toughest schedule in the country.

All that from a guy that one writer had ranked as the 14th ranked quarterback in the SEC. 247 Sports’ Brad Crawford also had likely Heisman winner Bryce Young ranked third so there’s that. And Will Rogers 13th. Talk about missing the mark.

There is no question Jefferson benefited from the nearly unstoppable season Treylon Burks had at wide receiver. Burks’ highlight reel catches and just plain beating the man/men covering him led to several big plays throughout the season. Just think if KJ and Burks would have been “on” versus Rice in game number one?

Jefferson also benefited from the emergence of Trey Knox at tight end as well as a handful of crucial catches from Blake Kern at the position. Not necessarily touchdown plays but key conversions throughout the back half of the season. Knox really blossomed in a hybrid type position after struggling to get open at wide receiver. He makes for a really tough matchup against linebackers and he should become a weapon in 2022.

The ability to stay upright is also critical for a quarterback to be successful and the veteran offensive line did a solid job as the Hogs only gave up 24 sacks this season. Last season, in two fewer games, it’s gave up 34. Jefferson’s bulky frame and his escapability helped as he is much harder to bring down and more elusive than last year’s starter and current Atlanta Falcon Feleipe Franks.

For good reason, the Hogs’ offensive line got some well-deserved credit by getting named a semi-finalist for the Joe Moore Award. The award recognizes the most outstanding offensive line unit in college football. Myron Cunningham’s stellar season at left tackle was crucial in protecting Jefferson’s blind side from the elite pass rushers of the SEC. Cunningham surely improved his draft stock as the super senior benefited from coming back to play a key role in the most successful Razorback football season in way too many years.

Despite a lot of complaining from Razorback fans about offensive coordinator Kendal Briles’ play calling, he deserves a lot of credit for the remarkable job with Jefferson as he also coaches the quarterbacks. After his performance in the first half against Rice, Jefferson’s play was largely sterling, even when pored over by analysts like the Arkansas Democrat-Gazette’s Scottie Bordelon. Bordelon tracked every conceivable facet of Jefferson’s performances on a game-by-game basis, including his worst attempted pass of each outing, but by the LSU game Bordelon was searching.

“This section is becoming increasingly difficult to write, because Jefferson is no longer egregiously missing many passes,” Bordelon wrote in his LSU game recap. “Maybe the only questionable throw Jefferson made against the Tigers was when he targeted tight end Blake Kern at the line of scrimmage on the Arkansas sideline early in the second half. He lofted the pass over a defender and nearly put too much air under it.”

While Jefferson’s 67% completion rate is behind only Franks’ 68.5% in Arkansas football history, his biggest problem in 2021 was his ability to consistently make intermediate passes. Through the LSU game, he had completed 37 of 72 passes between six and 15 yards in distance, according to numbers Bordelon compiled. That 51.39% completion rate was, as expected, far below the 79% he completed on passes shorter than that.

But it was also below the 55.1% he completed on deep passes of 16 yards or longer, which just goes to show what a tremendous deep ball passer Jefferson is:

Even when nitpicking in this way, though, it should also be noted that a few of those intermediate passes were on target but dropped by Razorback receivers. For instance, he was credited with completed 2 of 7 passes in the 6-10 yard range against Rice, but two of those “misses” were dropped balls, as Bordelon reported. Plus, it appeared that Jefferson completed a higher percentage of his intermediate passes in the final two games vs Alabama and Missouri (no breakdowns are available for those games).

Regardless, it’s clear Jefferson is a great fit for Briles’ version of offensive football with his ability to throw the deep ball and make things happen in the run game. They seemed to be in sync all season and Hog fans should be excited to see how that progresses leading up to the bowl game.

Right in line with his character, head coach Sam Pittman stayed loyal to Jefferson and it paid off in a big way. Pittman believed in Jefferson’s future enough to tell him the staff was not going shopping for a transfer portal quarterback and Pittman stuck to his word. Hard to believe anyone in last year’s transfer pool could have outplayed Jefferson this season.

Despite being behind Young, Corral and Rogers in terms of headlines, Jefferson’s name should be on some watch lists for 2022. For sure, his name should appear on the Davey O’Brien Award list to start next season. His case is helped by Corral likely moving on to the NFL (he may be the first quarterback taken in the 2022 NFL Draft). Young and Rogers are surely preseason first and second-team SEC quarterbacks but Jefferson should be in that mix as well.

The extent to which Jefferson can become even more accurate in all phases of the game in 2022 will depend on how he does without his top receiver. Treylon Burks played a bigger individual role in this year’s Arkansas offense than any receiver since Cobi Hamilton in 2012.

Replacing him, along with key offensive linemen like Myron Cunningham, represent the biggest challenge and weakness for Jefferson and the rest of the Razorback offense in 2022. Steady Tyson Morris and De’Vion Warren will also be gone. Despite those losses, there is receiver talent on campus and inbound in this recruiting class who will provide Jefferson with new targets.

Freshman Ketron Jackson has earned decent playing time and definitely looks the part. There appears to be some potential for Jackson to be an upper tier SEC receiver. Bryce Stephens was able to hang onto his redshirt year but has shown some flashes. Warren Thompson and former Oklahoma wideout Jaquayln Crawford should also return as redshirt seniors. Four Star recruits Isaiah Sategna from Fayetteville, who flipped from Oregon, and Clarendon’s Quincey McAdoo lead the class.

Along with all his stats, Jefferson’s emergence as a leader has been remarkable. He flashed this potential in 2020’s game versus Missouri when he led the Hogs to a last second touchdown and lucky two point conversion. KJ has appeared cool under pressure and confident in tight ball games. Feleipe Franks deserves some credit in that department as he was an excellent mentor to Jefferson in his one season on campus. Franks took Jefferson under his wing and taught him a ton about what it takes to be a SEC level quarterback. Jefferson took that and ran with it as evidenced by his play this season.

Quarterback play is crucial to win in high level football and Arkansas is definitely right in the thick of that. Teams with inferior quarterback play tend to hover at the bottom of the league. Just flip back to the Chad Morris era where poor play from Ben Hicks and Nick Starkel plus a flurry of “try this guy and see if it works” opportunities led to some really bad football.

The Future for Razorback Quarterbacks

KJ Jefferson has solidified that position for the Razorbacks allowing Pittman and crew to put the best complimentary players around him including lineman along with those flashy skill players. The Hogs are also one play away from going to a Malik Hornsby who doesn’t quite look the part yet. But that’s ok. Not many true freshmen do. Maybe Lucas Coley is next in line? There isn’t a quarterback in this year’s signing class yet so the coaching staff must feel good about what’s on campus.

My hope would be that KJ Jefferson puts on a show in the bowl game where he gathers some more publicity and recognition for the season he’s had. He checked all the boxes in what Briles is looking for in a QB and should only improve over the next month or so in bowl practices.

Let’s hope those two are still on campus next year to continue the great working relationship they have displayed. Odds are Briles’ name gets kicked around for some of these yet to be named staffs at some of college football’s elite programs. But who knows, maybe he likes working for Sam Pittman enough to stay put. He’s had five jobs in six years so hopefully he wants to spend some more time in Fayetteville. Time will tell.

Looking back now, it seems silly that some fans were screaming for Hornsby to get more snaps coming out of the Rice game. That first half was rough but once KJ Jefferson shook off what had to be nerves, he’s looked like a mature, been there done that quarterback every step of the way since. Winning teams covet that from the quarterback position and Jefferson delivered.

KJ for Heisman 2022.. why not? Sure, we might have jumped the gun here at Best of Arkansas Sports in September when we touted him a darkhorse for this season, but if Jefferson improves even half as much from 2021 to 2022 as he did from 2020 to 2021 he will be in the same stratosphere into which so many other SEC quarterbacks have ascended.