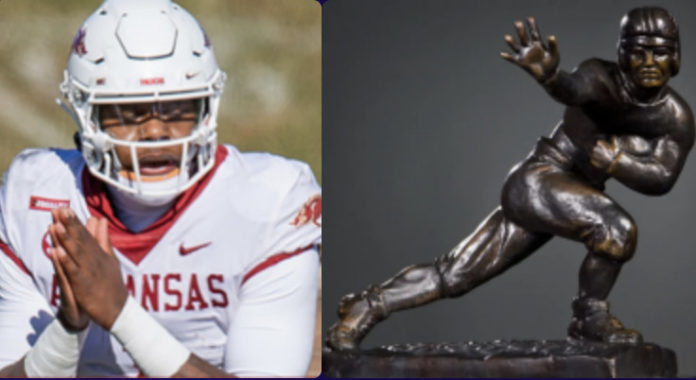 There was a time when collegiate sports information directors worked pretty hard to promote their respective candidates. As a newspaper sports editor, I’d get inundated with propaganda mailers from schools nationwide.

My favorite was a postcard of former Wisconsin running back Ron Dayne that said “Great Dayne” at at the top and pictured him with a large Great Dane canine. I hung on to that one for a long time. (Dane won the Heisman, btw.)

Today, SIDs probably operate a little differently and rely more on social media and digital persuasion of voters. Whatever way they go, however, the UA team should be getting ready to promote the heck out of sophomore quarterback KJ Jefferson.

All Jefferson has done so far is engineer one the better turnarounds in the country with Arkansas, who only won three games a year ago. Upsets of ranked Texas and Texas A&M squads moved the Hogs to 4-0 and a No. 8 ranking with a date at No. 2 Georgia and its vaunted defense Saturday morning.

In those four games, Jefferson, a Mississippi native, is the only SEC quarterback to amass more than 800 yards passing and 200 yards rushing. That includes his gutsy running down the stretch against Texas A&M to help salt away that game, too:

Still, the headlines all week have centered around two aspects of this game. One, Jefferson’s health. He slammed his knee hard on the turf in the A&M game last week and has worn a brace in practice. His mobility may be a factor, which is concerning, but Jefferson appears to be set on playing through whatever discomfort may be lingering and try to use his feet to keep the defense off balance.

And then there is the Georgia defense – the other headline grabber.

The Bulldogs rank No. 1 in the nation in total defense giving up just 3.27 yards per play and 181 yards per game. It could be the program’s best defense, which is saying a lot with its tradition, and is loaded with players who have NFL futures.

The Georgia defense is getting its due and is obviously talented, but it is also important to point out who they’ve played. The ‘Dawgs beat Clemson 10-3 in the opener. That’s a Clemson team that has since lost to N.C. State in two overtimes and only beaten Georgia Tech 14-8.

So yeah, Georgia is obviously good, but they haven’t been tested. On the other hand, Jefferson carved up Texas (not a tremendous defense but not a mid-major) and befuddled Texas A&M, who is tied at No. 22 in total defense and was much higher before Arkansas carved them up.

I would submit that Georgia defense should be as concerned about KJ Jefferson as Arkansas should be concerned about them. Early on, Jefferson has looked like Cam Newton before he started dressing like a 70-year-old woman in post-game press conferences.

The promise is there, and now he has the biggest stage to showcase his ability.

If Jefferson can get past his knee injury, he is more mobile and has more weapons at his disposal than the other teams Georgia has faced. However, as much as this game may stem on the physical talents of Jefferson and the 11 guys on the other side of the ball, the mental part may be even more important (It usually is).

Georgia has the athletes and experience to give Jefferson looks he hasn’t seen and move and shift players around.

Will KJ Jefferson Be Accurate Enough?

A knock on Jefferson, especially early, was his accuracy, or lack of it.

He’s completing 59% this season, which is down from Feleipe Franks’ 68.5% completion rate in 2020 but he’s also a bigger running threat and generating more offense overall (it helps Jefferson hasn’t had to play an all-SEC schedule like Franks.)

KJ Jefferson’s relative inaccuracy is something for which Georgia may scheme. Former Arkansas star quarterback and current radio sports talk show host Clint Stoerner addressed that issue on 103.7 The Buzz’s The Zone this week.

This was Stoerner’s answer when co-host Wess Moore asked what Arkansas does with a defense that can stop the run without bringing a safety down:

“To me, that’s the biggest concern with KJ Jefferson, is throwing the go route or throwing a post down the middle of the field when the safety vacates, I mean, hell I’m 43 and can do that right now,” Stoerner said. “Especially when Treylon Burks is on the other end of it.”

“And those are all the things that I think the jury’s still out on KJ Jefferson. Nobody has forced them into a position where he has to do those things.”

Good insight from one of the better quarterback minds around. Georgia may give Jefferson the underneath routes, and he must hit them. Treylon Burks is one of the better receivers in the country. If he is open on an eight-yard out, he can take one of those to the house. Making good smart decisions and staying out of third-and-long situations will also be key.

Arkansas can put pressure on Georgia by mixing in some gimmick plays and try running Jefferson a bit more if his knee allows. I think the pundits are way underselling Jefferson’s ability, and the entire Hogs offense, on giving the Bulldogs something they haven’t seen.

Pushing for the Heisman

The other major factor in the game is Arkansas’ defense. It is ranked No. 12 in the country in total defense and could give Georgia’s offense fits of its own. If the Razorbacks could force a couple of turnovers and set up the offense in scoring position, that would help KJ Jefferson and Co. tremendously.

Back to the Heisman. This Bulldogs squad has a very good defense on paper. It’s very hyped, maybe a bit too much but statically No. 1 and looks the part. If Jefferson engineers a win at Athens, which would almost certain propel Arkansas into the Top 5, isn’t he thrust into the conversation?

Absolutely. He probably should be there right now. Voters and other college football gurus still have the same doubts that Stoerner has about his passing accuracy, but I don’t think he’s played his best game yet.

If he does that the UA SID staff needs to get busy on the mailers … err, the emailers.

Here’s a look at what KJ Jefferson will likely face against Georgia: