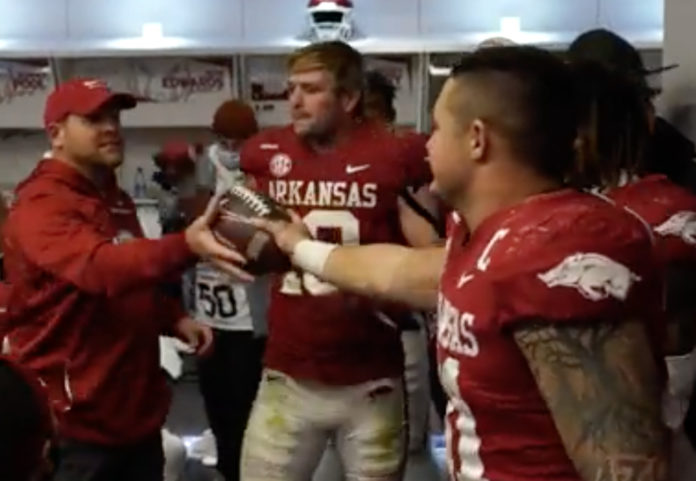 Arkansas’ shellacking of Missouri the day after Thanksgiving set up a rare relaxing weekend of college football fandom. Hogs fans knew they had rooting interest in Louisville vs Kentucky (alas, that didn’t shake out) and in LSU’s wild win over Texas A&M, an upset that moved Arkansas from fifth to third in the SEC West. Come bowl season, that might wind up being merely cosmetic: Teams don’t always get bowl invitations based on their conference standings. But it underlined what Arkansas fans, improbably, have come to learn this year. When they play up to their talent, the Hogs look a lot like the best in the West.

Other bombshells kept dropping Saturday: Michigan beat Ohio State for the first time since the earth cooled, Oklahoma State dropped Oklahoma and Florida fell on the road to Mizzou of all teams. It was a game they were predictably favored to take in the wake of Dan Mullen’s ouster, according to inplay American Football bets. It’s wild in these streets. The fallout means that at a merely respectable 8-4, Arkansas in its bowl game still might catch a marquee team that, like Arkansas, spent time in the top 10 this year.

So who’s it going to be? The below countdown, now in its third week, takes a fans’s-eye view of the teams Arkansas still could wind up playing in its bowl game. Minnesota this weekend knocked the Badgers out of the Big Ten Championship Game and out of the national rankings, so last week’s top pick, Wisconsin, has dropped a few slots. Now whom should you root for to appear with Arkansas on a Citrus Bowl sweatshirt — the one you’ll wear twice and donate to Goodwill in near-mint condition circa 2035? No less than a team that was in the thick of the national title picture until just two weeks ago.

The Cyclones are what you don’t want in a bowl opponent: an underperforming, unsexy team from a lame-duck conference … that still has enough talent to pull off the upset (see their 24-21 win over then-No. 8 Okie State in October). Matching up against a five-loss team with this much potential is pure downside for the Hogs, aside from the chance to flex in front of 4-stars in Houston if this, in some unlikely twist, becomes a weirdly high-powered Texas Bowl matchup.

On the one hand, no shade against the Wildcats for ranking them this low — this would be another Texas Bowl matchup, which would be a lousy shake for the Hogs. But on the other hand, shade. Statistically the Wildcats are a dead heat with the Razorbacks, have no real national profile this season, and would probably be a matchup for a second-tier game. Looking across the field at those corpse-like grey-on-purple unis, the Hogs might feel a sense of dismal deja vu: the Hogs whumped K-State in the last bowl they won, the 2016 Liberty Bowl. And that came only four years after the 2012 Cotton Bowl in which the Hogs dominated a matchup of two top-10, BCS-worthy teams, and finished the year ranked No. 5 in the country. Only a couple of lifetimes ago, that was.

The Nittany Lions beat Auburn! They beat Wisconsin! And then they lost by a field goal at then No. 3 Iowa and a week later crapped out in the longest game in NCAA history to Bret Bielema’s Illinois. Penn State has wilted down the stretch, losing five of seven, tumbling from No. 4 to unranked. But the Lions are still a premium-tier Big Ten brand-name program, and they’re still a recovering child sex-abuser protection ring. Beating Penn State will forever be a juice cleanse for the soul. As the fourth-place finisher in the brutal Big Ten East, the 7-5 Lions have lost some of their allure this year, but this would at least be the first-ever matchup between Arkansas and Penn State if this (disappointingly) turns out to be a Music City Bowl year for Arkansas.

The Demon Deacons are having one of their best seasons ever, with their only losses coming against UNC and Clemson. Whoever draws Wake come bowl season will have to run to keep up with their 43-ppg offense and their, uh, 100th-ranked defense. Yes, it sounds like fun, and if this is Arkansas’ opponent in the Gator Bowl on Dec. 30, it’s likely to be a track meet. The risk is that the Hogs could get outgunned by a program that has finished the year ranked in the AP poll just four times, ever. Great year for Wake and all, but there’s not much upside here.

The Boilermakers and Hogs are both 8-4 and wondering what could’ve been if they’d gotten some breaks along the way. Both teams are keenly aware of their ceilings — Georgia and Ohio State, the top two teams in the country, plainly outclassed the Hogs and the Boilermakers, respectively — yet feel they can hang with anyone. Purdue’s wins over Iowa and Michigan State look less impressive as the weeks pass, but at the time amounted to two Ws against top-5 teams, dream season stuff so long as you can also take care of Minnesota (oops). Statistically Purdue hovers around 50th nationally in offense and defense. It’s a fine matchup. This would make a Music City Bowl to celebrate. But the Hogs can still hope for better.

Look, this would be a fine Outback Bowl, and a winnable one for the Hogs, against a team that brings the fourth-best defense in the country, allowing fewer than 300 yards a game. But the Gophers aren’t even ranked, they lost four games this season, and they never managed to gain much of a national profile at all. What they have done, though, is wreck the dreams of Purdue and Wisconsin — the latter of which, Minnesota’s archrival, looked like a lock to get to play in the Big Ten title game until the Gophers held them to 13 points on Saturday, dumped a cooler of water on their coach, and stormed off with Paul Bunyan’s Axe. Supposedly that’s the name of the rivalry trophy they play for but it’s more fun not to fact-check these things.

The Badgers make a swell pairing for the Hogs. Arkansans, unrepentant cheese addicts, can swap rotel tips with Wisconsinites — who, as duck-hunting, macro-brewing, dairy-farming Bret Bielma exes themselves, make for natural frenemies. Wisconsin sports the nation’s second-best total defense, giving up fewer than 240 yards a game, but ranks only 86th in scoring offense. After watching Arkansas beat LSU on just 283 yards of offense, it’s clear that the Hogs can grind out a game of attrition. And after watching Minnesota thump the Badgers on Saturday it’s clear this would be a winnable game for the Hogs; the AP and Coaches Polls have the Badgers both at No. 26. Still, an Outback Bowl beatdown of the low-scoring Badgers would stake a claim to national respectability on New Year’s Day.

The Hogs would rather scooch into a more venerated venue than Jacksonville’s TIAA Bank Field for the Gator Bowl. But playing an 8-4 Clemson team that is ranked in a dead heat with Arkansas presents a scenario with a few benefits: namely, properly ghostbusting the stench of former Clemson offensive coordinator, current high school football coach, and sub-two-season natural disaster Chad Morris from Arkansas’s overall vibe. Clemson was the third-winningest college football team of the 2010s, averaging a preposterous 11.7 wins a year during the decade — more than double Arkansas’ 5.8 (which was good for 79th-most). Meeting Dabo Swinney in an uncharacteristic swoon while the Hogs are on an upswing could do wonders for morale in the 2020s.

The Hawkeyes were No. 2 in the country before Purdue and Wisconsin pantsed them. They have that old-school Big Ten cachet. And they did manage to win their Big Ten division, albeit the underperforming West. They’d be a real feather if the Hogs were to beat ‘em in the Citrus Bowl. Since they squeaked into the Big Ten Championship Game, and Michigan beat Ohio State, the No. 16 Hawkeyes may be bound for Pasadena and the Rose Bowl … but this could be a cracker of a Citrus Bowl matchup, and a very solid chance for Sam Pittman’s crew to pull an upset in a game they’d enter as clear underdogs.

Same scenario, but bump it up a notch. If Iowa can knock off Michigan in the Big Ten championship — not great odds, at 10.5-point underdogs — then Iowa could slip into the Fiesta Bowl where everyone has Michigan State projected to play Notre Dame. That would boop the No. 12 Spartans down to play in Orlando, in a Citrus Bowl where the SEC is likely to send Kentucky or Arkansas. So this is, looking at the big board, the best team in the country that the Hogs could still take a crack at, and if the Hogs want to finish the year ranked in the top 15 or so, this is the team Hogs fans should hope for on New Year’s Day. Because after watching Arkansas lose by just a touchdown at Tuscaloosa, and win eight games while playing arguably the country’s toughest schedule, it’s pretty clear the Hogs can hang with anyone.

Bring on the stoutest possible brick wall, and let’s see if KJ Jefferson can run through it.