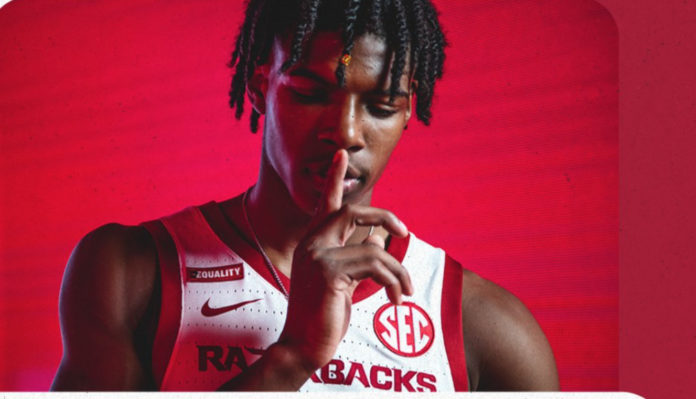 Saturday will feature yet another home matchup for the Razorbacks where they enter as heavy favorites. Arkansas will take on their second straight in-state opponent when they go up against the University of Arkansas Little Rock Trojans. The Hogs will look to extend their undefeated season to 8 games while the Trojans try to get a game over .500 as they currently sit at 4-4.

Another in-state opponent brings a few familiar faces back together as transfer forward Kamani Johnson will play against his former Trojan team. Little Rock, which is coached by former Razorback Darrell Walker, joined the University of Arkansas system in 1969. Despite this familiarity, the Razorbacks and Trojans will meet for the first time in an official game on Saturday afternoon, although the two programs have played in a previous preseason. Arkansas basketball coach Eric Musselman and the Hogs will do what they can to show this younger sibling school who’s boss.

When Little Rock Has the Ball

As with the majority of the Arkansas basketball schedule to this point, they will go up against an objectively poor offense. The Trojans enter this matchup with the 316th ranked offense. Their struggling offense has turned the ball over on 22% of possessions this season and have shot an abysmal 23% from beyond the arc. UALR does have good size and will be the tallest opponent Arkansas has played to this point. Look for the Trojans to play physical on offense and try to get to the free throw line where they are shooting a respectable 73%.

Personnel wise, UALR spreads the scoring across the board. Senior forward Nikola Maric leads the team with 12.8 points per contest followed closely by junior guard Isaiah Palermo at 12.3 points per game. Similar to Arkansas, the Trojans rely very heavily on 2-point attempts and seldom attack from the perimeter. It will be up to Arkansas’ 22nd-ranked defense to force contested shots without fouling. The metrics suggest the Hogs will be able to do this but it will be interesting to see how they rebound against a taller opponent. Barring an uncharacteristic performance from either side, the Trojans will likely have a hard time scoring against an athletic Arkansas defense that will look to force turnovers throughout this matchup.

Similar to the Razorbacks’ last in-state matchup – Wednesday’s romp of UCA – Arkansas should expect to score the ball with ease. The Trojans struggle to contest shots allowing a higher field goal percentage than 336 division 1 teams. Early on expect Arkansas to attack the interior where they have shot the ball at 54% clip. In contrast, the Razorbacks have struggled from outside ranking 333rd in made 3’s this season. The Hogs haven’t yet cracked the top 300 in three-point shooting percentage, either:

It would not be surprising if Arkansas basketball coach Eric Musselman game-plans to change that narrative against a weak opponent like UALR. Still, even through previous blowouts this season, we have not seen a good outside shooting performance from the Hogs. At this point, Arkansas’ suspect shooting from the outside is the biggest question mark regarding whether the team will be able to stay in the top 10 once the rigors of SEC play begin.

As always, it is wise to anticipate high scoring games from J.D. Notae, averaging 18 points per game, as well as Au’Diese Toney who is averaging over 13 points and 6 rebounds a game. If Arkansas can create separation, look for transfer guard Jaxon Robinson to enter the fold as the sharp shooter tries to carve out a role in this high powered offense. Saturday afternoon should be yet another opportunity for Eric Mussleman to experiment with his rotations but this is never a certainty. Despite having ample opportunity Arkansas has stuck with a consistent 7-man rotation so far this season.

Arkansas vs Little Rock: Things To Watch For

In what has become an unfortunate theme in this young season, the Hogs have struggled to get out to strong starts. This has bothered fans and coaches alike, but as Coach Musselman’s shirt reminds all of us “No garbage attitudes after a win”. All jokes aside, these slow starts have disallowed the Razorbacks from working through new rotations and testing out different players. In a perfect world, Devo Davis would not have to play 36 minutes against Pennsylvania and players with high potential like Jaxon Robinson and KK Robinson would have time to show off their prowess.

That said, Arkansas fans have to be happy with a 7-0 start as they are one of only 17 undefeated teams remaining in the country. Expect a fun offensive showing on Saturday as the Hogs look to move to 8-0 on the season.

According to the metrics, UALR will have to overcome pretty great odds to take this contest. The Trojans are projected to lose 88-61 per Kenpom and face a similar prediction from Haslametrics, 86-58. Regardless of which metric performs better, the Hogs should win this one by at least double digits. They rank better in every single Kenpom metric other than free throw percentage and will be playing at home. Expect a relatively easy win for Arkansas against the UALR Trojans to kick off a long-awaited in-state series.