Search
Home Arkansas Football Around the SEC Kendal Briles’ New Contract Will Show with Whom Arkansas Is Ready to... 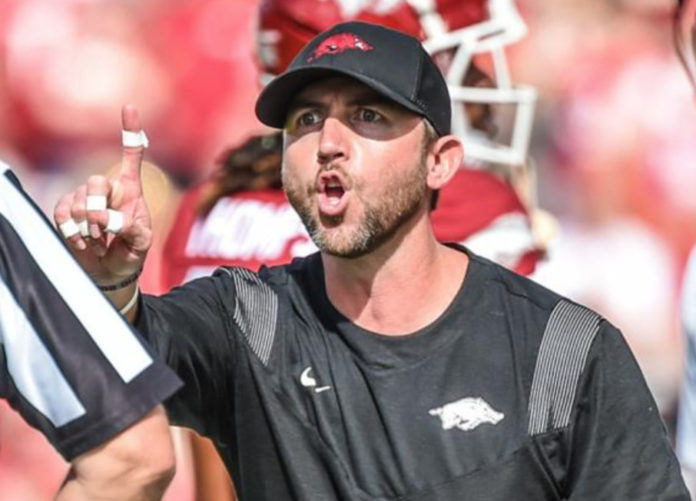 Gee, is Miami ever considered one of the best places to live in America?

Arkansas athletics, every year seemingly, sends the press release about how Fayetteville, Arkansas, was named one of the Top Places to Live For Young People or Top Places to Raise a Family or Top Places to Whatever! It’s nice. It’s cute. It’s meaningless to recruits or most major-sport coaches. The way football and some basketball coaches are paid, especially head coaches and top assistants, the cost-of-living is moot. Have you ever been Starkville? Mike Leach didn’t go to Starkville for its cosmopolitan atmosphere. Arkansas’ geography and socio-economic status has nothing to do with what it does in athletics.

All that notwithstanding, and said with a great deal of sarcasm – save the last two lines – the SEC is the place to be for college football coaches. The league is home to three of the top six head coach salaries in the game. It’s been the most dominant conference for upwards of 20 years and a lot of that is because the schools have ponied up the dough to hire the best.

And it must have been part of the reason Arkansas offensive coordinator Kendal Briles decided to stick around the Boston Mountains, too.

The Hurricanes came after Briles. Depending on which source you believe, they might have even offered him the same gig in south Florida. New Miami coach Mario Cristobal, a former offensive lineman for the school in the 1990s and most recently head coach at Oregon, still needs to find someone for the gig after last year’s OC, Rhett Lashlee, took the head coaching job at Southern Methodist. Lashlee, incidentally, is a former Arkansas quarterback.

A number of names have been bandied about for the job, including Briles, though Cristobal has yet to make a hire. Instead, Briles decided to return for a third season with the Razorbacks. Considering at the time of the coach’s first year at Arkansas he had had five different jobs in five different seasons, the decision is more than standard. He signed an extension after the 2020 season, but given his agent, Jimmy Sexton, and Arkansas’ success in 2021, he likely agreed to another this past week. Or at least a raise.

Sexton is an important name in this scenario. Arkansas head coach Sam Pittman switched his representation to Sexton’s agency, CAA, around early December. The move sparked speculation, albeit short-lived, among the fringe element of the Arkansas fan base that Pittman may not have been totally dedicated to the Razorbacks as he left Little Rock-based agent Judy Henry of Wright Lindsey Jennings, who played an important role in getting Pittman the job in Fayetteville in the first place. Sexton subsequently pursued an extension and raise for the Boss Hog.

Details of Briles’ new contract (if a new one has already been drafted) have not been released. But given his base salary of $1 million before Arkansas’ 9-4 season, it stands to reason, given his agent, that something more is coming.

Briles’ work in 2021 was impressive. Arkansas led the SEC and was seventh in the nation in rushing, averaging more than 227 yards a game on the ground. Four different players, including quarterback KJ Jefferson, eclipsed the 500-yard mark and all four also scored five-or-more rushing touchdowns. As quarterback coach, too, he helped Jefferson develop his arm, something that was considered a weakness before the season.

In the Razorbacks’ season opener against Rice, Jefferson was just 12 of 21, missing badly on throws both too high and too short. Briles recognized it and developed a gameplan to play to his quarterback’s strengths. The Razorbacks largely eschewed the medium-length pass and instead threw quickly to the sidelines more often than not.

Then, every so often, with All-American Treylon Burks always waiting, Jefferson would showcase his best throwing attribute – his arm strength – and beat a sleeping secondary deep. Arkansas was tied for 23rd in FBS in passing plays that went for more than 40 yards but was just 99th in college football’s top level in completions.

That’s on Briles. And Jefferson. According to WholeHogSports’ Tom Murphy, Kendal Briles’ raise could put him up around $1.5 million. Not shabby for a league in which the highest-paid coordinator, former Texas A&M DC Mike Elko, was making $2.1 million. And if you’re thinking Briles isn’t that close, relatively, consider that in early December, only 34 assistants were making more than $1 million a season, 16 of whom were in the SEC, per a USA TODAY report. Briles was one of them.

The question is how wise Arkansas will have been to re-up with the 39-year-old. If Briles hits the $1.5 million mark, it would have placed him in a tie for 10th when it comes to the highest paid assistant coaches in college football, alongside now-former Auburn defensive coordinator Derek Mason. Mason, it should be noted, has former head coaching experience.

Below is a list of the 10 highest paid assistant coaches in FBS last year. Notice how a couple of them are no longer in that employ.

Paying the Price with Barry Odom

Look at that again. Briles’ opposite, Odom, is the highest paid assistant in the sport who is still in the same job he was in last year. He earned a raise after Arkansas’ 2020 season, but given the Hogs’ 2021, he, too, may be in line for another payday, perhaps one that would make Odom the highest paid assistant in the sport. Even a modest raise would likely lift him to first among assistants who have stayed in the same job as last year.

Those aren’t small potatoes. They’re salaries that quantify the cost to be a big dog. And whether Sexton played Miami, or Sexton played Arkansas, or everything was on the up and up is, like our opening, irrelevant. The reality is the Razorbacks want to run with the best, they’ll have to pay.

Arkansas was wise (will be wise?) to re-up the 39-year-old. With Oklahoma and Texas coming on board soon, the SEC is only going to get stronger. Keeping the top assistants in the game, especially at places like Fayetteville, which aren’t yet in the highest of the upper echelons, despite whatever U.S. News & World Report says, is paramount to ensuring the Razorbacks ultimately reach the heights they seek.

In the wake of the reports that Miami had offered Kendal Briles, and the subsequent ones that Briles was staying put, one well-known Miami sports media member decided to throw a wrench into the machinery with this Tweet:

This started a bit of Twitter war between Ryan and hundreds of Arkansas football fans:

To which Razorback sports radio host John Nabors weighed in, using this an opportunity to showcase how so many media in other parts of the nation downplay the fact that really good coaches would actually want to stay in Arkansas despite attractive offers elsewhere:

“It’s like, ‘They’re so great. They do so many great things. It’s a historical school. They’ve got a lot of success.’Yeah, but it’s a dumpster fire. It’s a terrible job and it’s a terrible place to be a college football coach. Look at the past 15 years. It’s been a nightmare.

“The same thing goes in with players. ‘Well, why would this player transfer to Arkansas? I mean, if he was at Georgia and Alabama, LSU… Ehh, he probably wasn’t any good. They didn’t want him anyway.’ I was like, ‘Okay.’ That type of stuff just makes me laugh.”

“Because they can’t ever just give credit to Arkansas for saying, ‘You know what? They’re turning into something big time. They’re actually putting together a really good foundation, a really good culture that and that players, big-time coaches and big-time players want to be a part of.’ Plain and simple, that’s what it is.