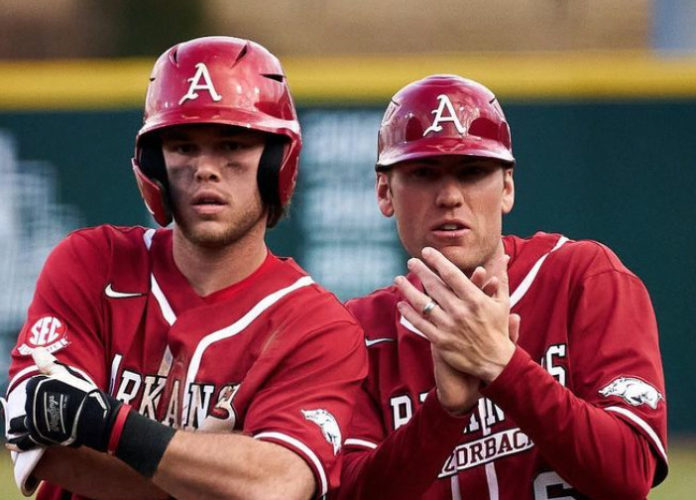 The Razorbacks are coming off a double-header sweep Saturday following a loss Friday to Southeastern. That was the second loss in a three-game series opener to start the season, a program record, but Arkansas is ready to get things back on track Thursday. The Flames, part of the Horizon League, had the opposite kind of weekend. They lost both games in a double-header Friday and won Saturday against Evansville.

Through nine games, the Flames are only scoring 3.8 runs per game. They have allowed 4.7 runs per game to opponents.

Senior left fielder is the only starter for UIC that is hitting above .280 for the young season. He is hitting .324 with the team-leading two home runs and five RBIs.

As a team, the Flames have hit .221 with five home runs. They are a patient team, averaging four free passes per game.

The Flames have good pitching out of the bullpen with  three relievers who have sub-2 ERAs with a combined 14 innings of work: sophomore Alec Schuldt, senior Tanner Shears and freshman Matt Zahora.

The keys for Arkansas to win will be similar to the last series with Southeastern. The Razorbacks’ pitchers need to throw strikes.

They got into trouble with that 7-run inning last Friday because they could not find the strike zone. Arkansas cannot allow themselves to gift runs away until the offense is in full swing. The Razorbacks must throw strikes to limit walks and strikeouts. The Flames strike out an average of 12.4 times per game.

Arkansas is still struggling on offense. They have been lacking the big hits. The Razorbacks have had plenty of people get on base, but they have stranded 84 runners on base in 85 offensive frames.

They are scoring 5.5 runs per game and have the team average up to .254 with eight home runs, so the numbers look better than what the eyes will tell you.

Senior catcher Michael Turner is hitting .344 with two home runs and 10 RBIs to lead the team in all categories, minimum three at-bats. In the past four games, he is 6-14 with six runs scored and seven RBIs.

Oklahoma transfer Jace Bohrofen has been coming on as of late too. After a 0-17 start, he has six hits in his last 11 at-bats and drove in five runs Saturday.

Sophomore pitcher Nate Peterson started the season off on fire. In his first two starts, he allowed two runs over 13.2 innings. His last start was a little more rough, giving up four runs in 6.2 innings against Evansville.

The Flames will likely use their best option out of the bullpen to relieve Peterson, similar to what Southeastern did Friday,

That means it will likely be low-scoring and competitive. The Razorbacks are only scoring 3.3 runs in series openers and are 1-2.

Junior Tyler Ingram has had two good starts and a bad start in the early parts of the year. He has an 0-3 record because he has had six runs of support in 3 starts.

Against California he allowed four runs in 1.1 innings Hs to inflate his ERA. His other two starts combined for three runs allowed over 12 innings.

Freshman Austin Ledbetter will make his first start Thursday. He pitched 2.2 shutout innings out of the bullpen last Friday.

“He had some real good outings in fall practices as well,” head coach Dave Van Horn said Wednesday. “We like that he has 3-4 pitches he can throw for a strike. We don’t expect him to go 80 pitches, 90 pitches, but it would be nice  if he could get us 3+ (innings). If he could get us 3+, that would be great. We just like we (should) let him start. We see him as a starter in the future. He earned it the other day when he came in and pitched well.”

All signs point to the Razorbacks. Arkansas has won the third game in all three series this season. They score an average of seven runs in the usual finale. Jaxon Wiggins currently has the lowest ERA of the Arkansas starting rotation.

Menegat did not pitch last weekend for the Flames so he will be rested. He has allowed two runs over 10 innings this year.

Last weekend, the Razorbacks took advantage of an exhausted bullpen due to it being a doubleheader, but now the bullpen will have two days to rest after Thursday.

The Hogs put up 11 runs on Sunday, but this weekend looks like it will be closer. Menegat has a good ERA and some guys can rest in two days that may have pitched Thursday.

Hagen Smith has been terrific in two of his starts. His other start was against No. 6 Stanford which is reasonable for a freshman to struggle with.

His last start was seven innings, allowing two runs and striking out nine. Both runs scored on one home run in the sixth inning.

This is the only four-game series on the schedule for Arkansas. Pitching-wise, Arkansas could use Adamiak who started the midweek game against Omaha.

If the bullpens are exhausted, that should favor the Razorbacks who should have a deeper bullpen and the more talented lineup statistically.

It’s hard to say how Sunday will look due to the weather, but the depth of Arkansas should be the difference.

The schedule of games was changed due to the expected weather Friday. That may change how each team uses their bullpens or rotations.

It should favor Arkansas because there is a double header since the Razorbacks appear to be the deeper team and swept the double header last weekend.

Looking at each game individually, the Razorbacks should win each one. However, looking at the series as a whole, it is most likely IUC escapes Fayetteville with one victory, since the Razorbacks are yet to sweep a weekend series.

The weather will make the games harder and keep the ball from flying around too much, so there probably won’t be too many runs scored in the series.

Arkansas likely wins three of four and the starting pitchers should continue to shine for the Razorbacks.