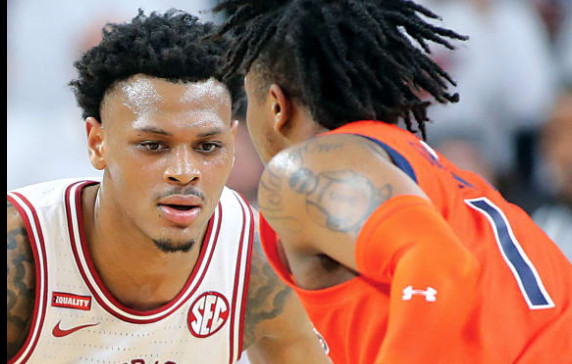 The immediate, necessary disclaimer that I have to offer about the SEC tournament is…well, I don’t like it.

Conference tournaments generally cause me to bristle, in fact. In the world of a mid-major, sure, they’re everything, as automatic berths are at the heart of what makes every March so damned chaotic.

But for SEC teams like Arkansas, especially given this farcical NET rating business, there’s precious little to gain from a league-wide tourney at this point. Prognosticators think this team is more or less locked into its NCAA seeding with wiggle room in either direction depending on how the Hogs fare in Tampa.

A hobbled, critical Au’Diese Toney—he ended up sitting out Arkansas basketball’s season-ending loss at Tennessee—makes the calculus even harder on the staff. If one of your best and most versatile players isn’t well, then how aggressively do you play it given the stakes?

A year ago, the Hogs’ strong February and March essentially settled them on the three-line before the tourney. They knocked off Missouri on Friday night, then succumbed to LSU Saturday in what I’d characterize as an ideal outcome.

We won a game and lost a toughie but didn’t get hurt. We came home and got geared up for what ended up being a thrilling run to the Elite 8.

And I think we’d take that again, right?

Arkansas’ rotations to three-point shooters, terribly slow in December, tightened up as the Hogs went on their 2022 tear. Toney’s combination of wingspan and agility is a central component of it, and when he sat out against the Vols, they promptly drained nine first-half treys.

In a league where that degree of defensive prowess sets the top quartet apart, Arkansas clearly needed that cog. If the Hogs face LSU on Friday afternoon, they’re already cognizant of the shoot-first mentality of the Tigers’ Darius Days and Brandon Murray.

A win for the Razorbacks in Arkansas vs LSU likely pits the Hogs against Auburn on Saturday, and at least one of Bruce Pearl’s players can’t seem to stay quiet about it. Because the Razorbacks’ upset of their then-No. 1 rival a month ago ranked as one of the year’s best games, the enticement of a rematch is big for both camps.

But does it benefit the Hogs to, say, duplicate their 2021 performance in a new venue? Would beating LSU but losing to Auburn make any kind of ripple for the Big Dance? Seems dubious.

If anything, the intensely physical nature of the Hogs’ prior matchups with the top dogs of the league suggests risk exceeds reward. Toney’s injury echoes the one Brady Slavens suffered in a blowout win at Hoover last spring.

The Hog baseballers seemingly overcame that, marching to their first-ever conference tourney title in businesslike fashion. But Slavens struggled upon returning, and it became inconveniently contagious.

Bad Karma Does, Too

This tournament’s relative unkindness to Arkansas isn’t worth belaboring. We are 22 years removed from a seemingly pedestrian, 15-14 Hog team rolling through four teams in four days to win that crown.

Those of us fortunate enough to watch that also realize two basic truths about that experience:

Winning a conference tournament in these conditions would undoubtedly be a major achievement for the program. One tourney title in 30 years does fuel fan hunger for another one.

It’s also not uncommon for a team to blow through a league tourney and look invincible in the process, only to ferret away any momentum in the NCAA opening round. Arkansas did that in 2000 with an appreciably weaker team; if this squad won the SEC championship but failed to advance past the first weekend of the Dance, the mood here wouldn’t be so hot.

Arkansas’ path, incidentally, includes those two Tiger teams they’ve beaten three times in total. We know how hard it is to beat a talented, if flawed team, like LSU three times within a few weeks. It was hard as hell getting by them just a few days ago, and Auburn’s been itching for vengeance, too.

Assuming the Hogs did vanquish both, Kentucky or Tennessee is a prohibitive finalist favorite. And both teams showed their ability to exploit the Razorbacks’ weaknesses on the glass and from the perimeter. Kentucky will be hot for revenge after succumbing in Fayetteville, too.

You can rationalize, as I am clearly doing, the drawbacks of this tournament all day long. Everyone who remembers that 2000 title also remembers how insanely entertaining a 72-hour period it represented.

And last summer’s baseball experience reminded us, too, that it’s no trivial thing to go to a neutral site and beat up your rivals.

Arkansas has a shot at this thing, which didn’t seem like a viable viewpoint to offer not that long ago. But the Hogs’ health is of the utmost concern, and Eric Musselman isn’t the type to compromise the value of Toney or any other player at the expense of the team’s bigger mission.

See our latest on Arkansas vs LSU here: