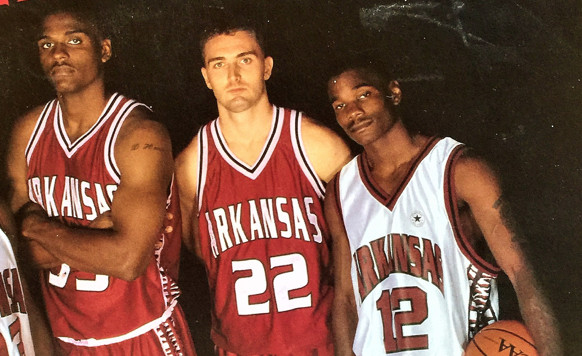 It was an assignment that, even as a cub reporter, was hard to mess up. But the ringing wouldn’t stop and made listening to the tape of soundbites and writing around 800 words of copy seem daunting.

The Razorbacks had been fighting for their NCAA Tournament lives and hadn’t played well down the stretch. A Saturday home game with No. 6 Kentucky on CBS and the Wednesday home finale against No. 2 Auburn loomed large.

On Saturday, Arkansas pulled out a 74-70 win over the supposedly mighty Wildcats. I can still clearly see Reid standing on the press table (they were on the sidelines then) acknowledging the student section as they serenaded him.

An Arkansas Basketball Moment for the History Books

That set up the showdown Wednesday. The Bud Walton Arena crowd was lit beginning during the pregame introductions of the seniors.

“That’s the best crowd we’ve ever had, they were loud in warmups,” Bradley told me via text message on Monday morning. “The fans made a difference. The fans’ enthusiasm took our focus and energy to a level most players can’t get to on their own. Fortunately for us as players, we were locked in so even though we couldn’t hear each other we were still reading each other.”

Yeah, hearing was a problem. During one of the time outs when the Hogs were on a run in the second half, I was sitting by my good friend and longtime Arkansas newspaper man Buck Ringgold, and we couldn’t hear each other. I mean, I was right next to him.

When the decibel meter finally fell to reasonable levels, Arkansas had crushed the Tigers and its star Chris Porter, who had graced Sports Illustrated’s cover earlier that season. Final score: 104-88. Porter coughed up four of the Tigers’ 13 turnovers on the night.

Bradley led the Hogs with 23 points on 5-of-7 3-point shooting, which was fitting as he finished as the top 3-point shooter in the SEC and Arkansas history. Hood totaled 18 points, 13 rebounds and six assists and Reid added 10 points and dished out a game-high 10 assists. I told you it was an easy story to write – when three honored legendary seniors go off to take down the No. 2-ranked team.

Arkansas vs Auburn in the Neon Lights Again

Twenty-three years later the two teams meet again in similar circumstances. This time Auburn is ranked No. 1 and the Hogs are still shaping their NCAA Tournament resume riding an 8-game winning streak and would like nothing more than to add another notch in their belt by dethroning the Tigers. The Hogs, who are No. 3 in the SEC West, are also trying to secure a spot in the upper echelon of the SEC West.

Auburn is 22-1 and hasn’t lost since Nov. 22 when UConn edged them 115-109. The Tigers are not invincible, though, especially on the road, having won several close games including a 74-70 win at St. Louis in December and narrow wins at SEC also-rans Missouri (55-54) and Georgia (74-72) on Saturday. The Tigers also held off rival Alabama 81-77 in Tuscaloosa last month.

So, Auburn isn’t 1990 UNLV, but they find ways to win with star freshman 6-foot-10 freshman Jabari Smith leading the way while averaging 15.3 points and 6.7 rebounds per game.

As good as the Tigers have been, they are due for a loss. A hot Arkansas basketball team playing at Bud Walton Arena is the club to do it. Granted, the Hogs’ wins haven’t come against the elite of the league, other than at LSU (who was hot at the time), it has given them a chance to shake off an 0-3 start and their only home loss of the year – a 75-74 defeat Jan. 4 to Vanderbilt.

A win against the Tigers breathes life back into the thought that many of us in the media had that the Hogs could make another deep run in the NCAA Tournament. It also could give them more confidence to navigate a stretch run that includes a game at Alabama this weekend, two games with Tennessee and a home tilt with Kentucky on Feb. 24.

The Razorbacks are playing well as a team. With JD Notate averaging close to 20 points per game and two others (Au’Diese Toney and Stanley Umude) in double figures, there is scoring punch there. Plus, diminutive guard Chris Lykes and post man Jaylin Williams are both averaging just under 10 points per game and have come on as of late. Williams’ inside-out game has been key during this win streak and if Lykes can be consistent, he can really make a difference at the point guard spot on both ends of the floor.

All the ingredients are there to make Tuesday’s game a signature moment in the three-year Eric Musselman Era. The question is can the Arkansas basketball crowd, which hasn’t been ear-shatteringly loud in a long time, equal the decibel mark from 23 years ago.

“I hope so,” Bradley said. “It helps there has been a buildup of winning the past two weeks.”

Get a taste of the magic from that ’99 game here:

Pat Bradley interviews Nolan Richardson about some of the best moments in Arkansas basketball:

For our in-depth preview of Arkansas vs Auburn, go here: