Search
Home Arkansas Basketball Razorback News Arkansas Takes on LSU Again as the Heat Rachets Up on Will... 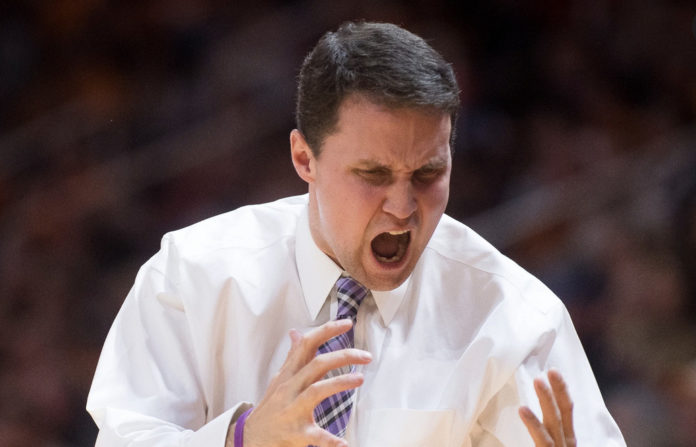 It was announced on Tuesday that LSU finally received a notice of allegations related to potential violations in the men’s basketball and football programs. While specifics of the allegations will likely be held behind closed doors until LSU complies with open records requests, ESPN reports that the basketball allegations are “significant,” including ties to the federal basketball investigation that became public in 2017.

It’s highly unlikely that anything will be resolved, or even advanced in the process, before the NCAA Tournament is over – much less the SEC Tournament – but LSU basketball head coach Will Wade and his players could already be feeling the repercussions.

Incredibly, this kind of thing is in a way old hat LSU’s head man, who was suspended from the 2019 SEC and NCAA Tournament after a report involving Will Wade on a wiretap making a “strong ass” offer to a recruit. Going forward, he will likely receive the psychic brunt of the burden stemming from this news, and it’s unclear if it will affect his or his players’ ability to perform on the court. Certainly, it didn’t seem to hinder the Tigers much in their 76-68 victory over Missouri, but Mizzou is hardly a great standard to measure focus by.

Quarterfinal opponent Arkansas, however, is a whole other beast. The Razorbacks will be searching for the rare single-season three-peat against LSU after beating them twice in the regular season. Any edge, such as the one this flare up of LSU scrutiny may confer, will come in handy against an LSU basketball team hungry for revenge. Arkansas has played a three-game single-season series against the same team only nine times since the year 2000, sweeping a series only once back in 2000-2001 against, you guessed it, the LSU Tigers.

Those 2001 Tigers, led by future NBA player Ronald Dupree, went 13-16 on the season, missing out on the NCAA Tournament entirely. In the same season, Arkansas experienced a First-Round exit from the NCAAT behind the leadership of future NBA All-Star Joe Johnson and NBA journeyman Jannero Pargo.

Knocking off LSU for a third time in a row won’t be easy. Arkansas narrowly escaped their home matchup against LSU less than two weeks ago when a pair of JD Notae free throws gave the Hogs a 77-76 come-from-behind victory.

“[LSU] is a bad matchup for Arkansas,” says Pig Trail Nation’s Mike Irwin. “It’s hard to beat a team three times in one year – it’s especially hard to do it when they’ve got good talent. It’s going to be a tough game for Arkansas. Right now, if I had to put money on it, I’d go with LSU.”

Fortunately, the Hogs had a good feeling they’d be getting LSU in the third round of the tournament several days ago. When Arkansas basketball coach Musselman joined the crew on SEC Network at halftime of the LSU vs Missouri game, he said, “we’ve been preparing for LSU all week, not even sprinkling any other team in. We feel like we need to know them inside and out.” Perhaps the extra preparation time will prove to be the deciding factor favoring the Hogs.

What to Expect When LSU Has the Ball

Xavier Pinson is LSU’s quarterback on the hardwood. The senior guard leads the Tigers in assists at 4.7 per game while also averaging double digit points (10.3) on the season. He shoots only 25% from behind the arc, but he knows how to navigate a pick-and-roll as well as anyone in the country. The 6-2 transfer carries a question mark into the SEC Tournament, however, after he left the Tigers’ season-finale in overtime with an apparent knee injury. Will Wade noted that “[Pinson] will be fine,” but we’ve grown cautious of believing coach Wade at his word.

Pinson was good to go against Missouri, his former team, in the second round of the SEC Tournament, but the turnaround time for the next round of the SECT is only about 24 hours. The Tiger point guard could still see some lasting effects being forced into action for multiple days in a row.

Tari Eason was recently named the 6th Man of the Year in the SEC, and the Hogs have firsthand experience as to why the 6-7 transfer received this award. In two games against Arkansas this season, Eason came off the bench to average 18.5 points, 5.5 rebounds, and 2.5 steals per game. The former Cincinnati Bearcat was well on his way to single-handedly beating the Hogs in Bud Walton Arena in Round Two of the season series with a furious display of isolation offense before he fouled out late in the game.

Arkansas also finally overcame a good outing from Darius Days for the first time in his LSU career. Prior to the Hogs’ win on March 2nd, Days averaged 11.8 points and 9.8 rebounds in wins against the Razorbacks, but only 1.8 points and 4.0 rebounds in losses. The 6-7 senior scored 19 points on 60% 3-point shooting in the Razorbacks’ most recent win, however, breaking his previous tendency to be the deciding factor in these inner-conference matchups. Expect the senior forward be out for vengeance in what could be his final game against the Hogs on Friday afternoon.

Arkansas was headed for disaster when a combination of foul trouble, lackadaisical offense, and exemplary shooting from Tennessee left them in a 24-point hole early in their season finale on the road against the Volunteers. Amazingly, the Razorbacks found the touch from long range to cut the Tennessee lead to only two points with under a minute to play.

Their comeback was ultimately thwarted due to a couple of late-game miscues on errant passes and poor shot selection, but the comeback attempt may not have been for nothing. The Hogs managed to shoot 36% from long range and made a top-tier SEC team sweat on their home court, all while missing their best perimeter defender in Au’Diese Toney due to injury. Moral victories don’t win championships, but maintaining momentum can help. Arkansas will look to build on that momentum against arguable the best defensive team in the country on Friday.

LSU finished 2nd in the country in steals at 11.2 per game, including 10.2 against SEC teams. They held conference opponents to 41% FG shooting (3rd in SEC) and 29% 3P shooting (1st in SEC). Arkansas shot only 43% from the field and 26% from long range against LSU during the regular season, so don’t expect many offensive fireworks from the Hogs on a neutral court. This game will likely be won or lost on the defensive side of the ball, which leads to a major question mark for the Razorbacks: the status of 6-6 guard/forward, Au’Diese Toney.

Arkansas vs LSU What to Watch For

Toney appeared to twist his ankle late in the Razorbacks’ game against LSU on March 2nd, causing him to miss the final game of the regular season against Tennessee last Saturday. It has been reported that Toney will travel to Tampa, FL with the team for the SEC tournament, but he was seen in a walking boot and didn’t practice the week prior to the tournament. He did practice with the team in their Wednesday morning walk-through in Tampa, however.

Toney’s defensive presence on the LSU guards was arguably the biggest factor in the Hogs’ first win over the Tigers in mid-January. He helped to shut down sophomore guard Eric Gaines in the first matchup, and played a role in slowing down Xavier Pinson in the most recent victory. Musselman will likely weigh the pros and cons of sitting his star defender in preparation for the all-important NCAA Tournament if he’s not 100% ready to go.

Arkansas is “going down to Tampa to win,” according to head coach Eric Musselman. Toney’s health will play a factor in his availability, but it appears the Razorbacks are not overlooking the SEC Tournament in preparation of the Big Dance, regardless of their starting guard’s status. The NCAA Tournament, after all, is always the main focus and Vegas currently pegs Arkansas between a 4 and 5 seed according to March Madness odds.

Unfortunately, it’s incredibly difficult to beat a good team three times in the same season, as is evident by the Hogs’ 1-8 record in their last nine three-game series. Arkansas will go toe to toe with LSU, as they’ve done in each of their last 16 games, leaning on their defense to keep them in the game. Stanley Umude will have a good offensive performance in a neutral court setting, but LSU will finally get their revenge on the Hogs in a nail-biting win, sending them to the SEC conference semi-finals.

How Watch Arkansas vs LSU