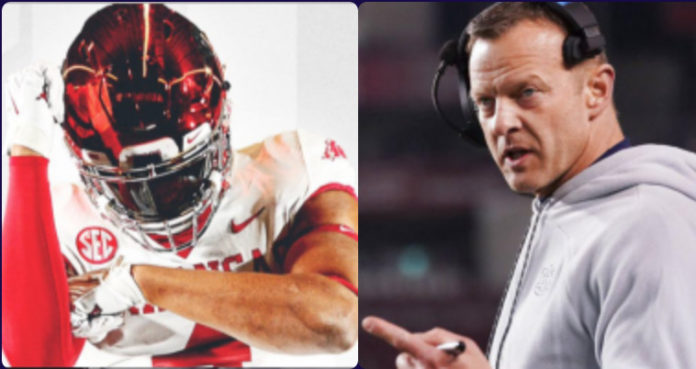 We all know the SEC can produce the highest of highs when it comes to football, but often there is a price to pay for the borderline maniacal competitiveness fueling that success. Dysfunctional football seems to spread its way around the SEC. Arkansas has had their fair share. Actually, more than its share. I’m not talking about poor performance and getting canned. That happens everywhere. This is full blown what-in-the-world is going on type stuff.

Houston Nutt got things started with his handling of Mitch Mustain and Gus Malzahn while fans were tracking airplane tail numbers and making Freedom of Information Act requests on his cell phone records. Then Bobby Petrino’s motorcycle riding and girlfriend cover up followed by the inexplicable hiring of the goofy and bankrupt John L. Smith as an interim coach.

Not to be outdone, interim athletic director Julie Cromer Peoples fired Bret Bielema as he came off the field after a 4-8 season ending loss to Missouri. Then Peoples and crew landed on Chad Morris as the right man to take over the Razorback football program. Talk about a whiff. Morris didn’t even last two seasons and was shown the door after getting smoked by Western Kentucky and lit up by a quarterback he ran off from Fayetteville.

Thankfully, at least for the time being, Hunter Yurachek’s gutsy hire of Sam Pittman seems to have righted the ship. The football program is winning on the field and in recruiting and by all indications, has the opportunity to stay in the upper half of the daunting SEC West. Arkansas football players and fans deserve the stability as that was a rough patch that nobody wants to endure again.

One could make the case that Auburn University ranks right on up there with a solid ability to create a mess with their football program. Not being an intimate follower of Auburn football, my first recollection of dysfunction was in 2003 and involved our guy Bobby Petrino being interviewed in a clandestine manner before the Iron Bowl while Tommy Tuberville was the head man on the Plains. The whole event even got a name…Jetgate.

Gene Chizik won a national championship in his second year at the helm then was promptly fired two seasons later. Then came the whirlwind of another guy with Arkansas ties…Gus Malzahn. Malzahn beat the mighty Crimson Tide a few times, won the SEC in 2013 and even played for the national championship in 2014 but always seemed to be flirting with other jobs (namely Arkansas) and in the Auburn fan base’s eyes, seemed to underachieve. Nevermind Malzahn won 67% of his games in his eight seasons running the show. Being in Nick Saban and Alabama’s shadow will do that to you.

Now, we have the Bryan Harsin tenure which for the time being appears to still be going. Although he just finished his first season at Auburn, Coach Harsin was nearly kicked to the curb based on the innuendos from a legion of disgruntled boosters. Purported issues within the program seemed to take off when Mike Bobo was fired as offensive coordinator after one season then his replacement left after 43 days on the job. More red flags went up when Derek Mason took a paycut to go be the defensive coordinator at Oklahoma State. Then 18 players hit the transfer portal including the enigmatic Bo Nix. Several of those transferring loudly complained about how they were treated and Harsin’s coaching style on social media.

It appears the whole mess is already benefiting Arkansas to a degree. For weeks, Georgia Tech transfer Jordan Dominick was deciding between the Arkansa and Auburn football programs. The defensive lineman had originally planned to visit Fayetteville first and then Auburn on March 18. Instead, he declared he was all Hog after meeting with the Arkansas coaches and scrapped his Auburn visit altogether. Expect a few more situations like this to unfold when recruits and transfers weigh the situation on the Plains vs that of more stable programs in the SEC.

Sure, Dominick’s decision says more about the Razorbacks’ success than Auburn’s instability. But it would be naive to think all that drama behind closed doors on the Plains is irrelevant. Auburn boosters, after all, are known to be a very meddlesome bunch and their apparent belief Bryan Harsin was a bad fit for the Tigers led everyone to believe Harsin would be kicked to the curb regardless of his very expensive buyout.

The university had launched an investigation into all the claims floating around the program which made Harsin’s firing imminent. Then remarkably he was retained and people around college football are still shaking their heads as to how and most of all why.

With a talented team, Harsin went 6-7 where the team collapsed losing five in a row to end the year. Recruiting, by Auburn standards, was low (please note that Arkansas would love to be #19 in the country in recruiting). Then the previously mentioned debacle with assistant coaches and star players leaving town.

Despite retaining the Auburn head coaching position, none of that above spells long term job security to me. It’s like Harsin is on that rope ladder game at the fair that will flip you off at any minute with one little wrong move. There is literally no chance he has the opportunity to ring the little bell. He has yet another new offensive coordinator to start spring football and will be trying out the inconsistent duo of TJ Finley and A&M transfer Zach Calzada to replace Nix at quarterback.

Opportunity in the SEC West

One would stand to reason Arkansas, as well as everyone else in the SEC West, is sensing blood in the water with the shenanigans at Auburn. Everyone on that side of the league is competitive and jockeying for a spot behind the behemoth that is Alabama. The darlings of the media, Texas A&M, sound like they are ready to make a run at that spot but I will believe it when I see it. The hugs and kisses Aggie football receives from the media compares to University of Mississippi baseball as they are always ranked very high in the preseason but have only managed one trip to Omaha in Coach Mike Bianco’s tenure.

By hiring Brian Kelly, LSU should be back up there quickly. He’s a proven coach and has been in the big spotlight before at Notre Dame. Despite his stumbles with the fake accent ordeal and the dad dance moves, Kelly can coach and will get LSU competing at a high level sooner than later. He’s not inheriting a dumpster fire either and recruited well with #12 class according to 247Sports composite rankings. Don’t buy into he’s not from the south mantra. Neither was Saban and he’s done pretty well.

What Say You, Arkansas

The Razorbacks could take advantage of issues at Auburn in the high school recruiting world as well. Pittman’s regime is dialed in on getting some talent out of Georgia with a little bit of Florida mixed in. Both are areas where Auburn has done quite well over the years. Arkansas running backs coach and former successful Georgia high school coach Jimmy Smith is thought of very highly in Georgia and continues to pull in some high level talent from the area. I expect that to continue but maybe a few more doors will be opened while Auburn sorts themselves out.

But don’t think geographically closer schools aren’t thinking the same thing. Starkville is only 30 odd miles from the Alabama border. Although Georgia is recruiting at an elite level right now, I’m certain a player or two they really liked in the past chose Auburn. The same could be said for Alabama.

Getting the best of the best in Arkansas plus a strong contingent out of Texas has always been a key ingredient for the Razorbacks’ best teams. That shouldn’t change regardless of what Auburn or anyone else is doing.

Despite all this chaos, Auburn is still Auburn. The program is very much relevant in college football and there is talent on campus. Despite Auburn being “down” the last couple of seasons, Arkansas still hasn’t solved them. At least not formally. The Tigers benefited from a blown call in 2020 on Nix’s backwards pass ruled incorrectly that allowed Auburn to kick a game winning field goal. This season, Pittman’s squad played probably their worst game of the year, losing 38-23 in Fayetteville.

Time will tell if retaining Harsin was the right move or not. Some tend to believe he was retained for some savings on his buyout which drops by $4 million dollars later this year. But that makes no sense. Possibly ruining your football program by hanging onto a lame duck coach will cost them way more than that.

The investigation into the program and Harsin himself must not have turned up enough ammo to fire him or he would be gone. Finances may have come into play with the university still paying Malzahn his $21.45 million dollar buyout. That’s a mind blowing amount of money to panic and fire the new guy after one season because of a dissatisfied mob of boosters.

If he is let go early into his tenure, it won’t be the first time the Auburn boosters meddled in the football program and rode roughshod over the athletic director.

They just can’t help themselves.

Sam Pittman recently spoke with Saturday Down South’s Connor O’Gara for over 30 minutes. Here are some choice excerpts:

Connor:
If you weren’t a football coach, what would you be doing for a living?

Sam Pittman:
Wow. Salesman. I don’t know why. I tried to sell encyclopedias at one point, I sold set to my parents and that was it.

Connor:
Wait, what? Were you a door to door in encyclopedia salesman?

Sam Pittman:
No, I was a door to my parents house and then that was the end of it. It didn’t last very long, it was horrible. But you know what? I think if I wasn’t (the Arkansas football coach), I’d like to be some type of commentator, I think that’d be fine.

Connor:
How much are you benching right now?

Connor:
Are you on a diet plan right now, a fitness plan?

Sam Pittman:
Yeah. I don’t know if it’s called Keto or Atkins, it’s kind of a little bit of both but basically is, I eat whatever the nutritionist puts on my plate. And I started doing that August 1st when Judy Henry [Pittman’s former agent] was helping me and I’m down 40, 42 or something like that and I feel a lot better.”

“It’s not the end result, because I remember when I lost my first 25, I thought I was Arnold Schwarzenegger and that was almost 20 pounds ago. So the journey has been fun…”

See our latest post on the Razorbacks and Auburn here: