Search
Home Arkansas Basketball Perspective After Arkansas-Auburn, the SEC Misfired on Who Really Should Have Been Fined 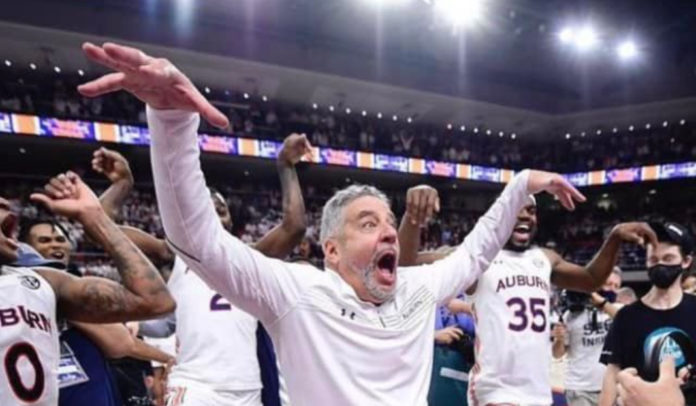 During this school year, the University of Arkansas has been fined $350,000 by the Southeastern Conference for storming the field against Texas ($100,000) and the court when the Razorbacks knocked off Auburn ($250,000) last week.

Count me in that last group.

What I do care about, though, are the fines levied by the Southeastern Conference.  It brings up some big questions as to why would any university be fined any amount for storming the field or court.

What business does the SEC have in dictating how one of its member universities celebrates its victories?  Surely, the only reasonable answer is “player safety.”  Okay.  I could live with that — if it appeared to be a big problem.  It’s not.  Yes, it’s true that Kansas guard Remy Martin had to sit out for a bit after he got bumped in the knee in Austin when the ‘Horn storm occurred after beating Kansas.  Even Kansas head coach Bill Self didn’t complain about the court storming, but that Texas’ Erwin Center was unprepared.

Let’s step back for a second and look at his reasonably. Does anyone in the SEC front office think Arkansas fans would engage in fisticuffs with an Auburn player:

Or, is it a matter of degree?  If this was last year, when attendance was bludgeoned into submission by Covid-19 and say, 25 people stormed the court, would it really warrant a $10,000 per person fine?

When I was younger, it seemed like this country was all about life, liberty and the pursuit of happiness, as long as that pursuit doesn’t tread on someone else.

If the athletic directors gave the SEC the right to determine when that “pursuit” turns into “treading” they should take it back.  Still, should it even be the SEC’s responsibility?  My answer to that is an unequivocal HELL NO!!!!!!

Even the greediest ambulance-chasing lawyer would have a hard time getting into the deep pockets of the SEC for a money grab because they merely sanctioned an event.  They don’t own Bud Walton Arena, the players’ jerseys or the Jumbotron. And they sure don’t pay our liability insurance.

Now, let’s talk about something that should have been fined.

That something was revealed to the public after the game.  It was a video of the Auburn basketball players dancing around, jumping on, and even stomping on the Razorback logo at mid-court. If these kids want to be treated like pros through NIL deals, almost no restrictions on transferring and the like, they need to ask themselves, “Would MJ, Steph, LeBron, KD or Giannis do this?”  Never.

The reality of these two situations is that the coaches have FAR MORE control over how their players act than the university has over its fans.  If that’s not clear, then you’ve wasted your time reading up to this point.

Of course, it shouldn’t surprise any of us that these are Bruce Pearl’s players.

The Auburn basketball coach is not who we think of as “classy,” not after involvement in a litany of scandals going back to the 1980s when he was a lowly assistant.  It’s who he is.

Of course, none of Auburn’s cocky jack-ass antics worked in their favor.  Eric Musselman brilliantly made sure that every Arkansas player saw the display before the game.

The rest is literally history.  That’s why the fans rushed the court.

When it comes to Arkansas basketball and football, the SEC needs to back off.  When loyal fans have had to suffer through many lost years of mediocrity, we may get a little excited when we find clear evidence that those days appear to be behind us.