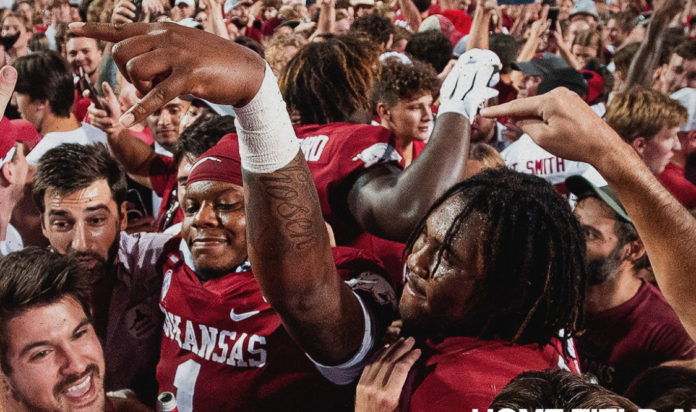 It’s early going, but so far the Arkansas football program is enjoying the kind of offseason you tell your grandchildren about.

The Razorbacks team proper is showing up in the top 20 of the first batches of too-early preseason polls, but it’s what the coaches are doing in two other realms that are turning even more heads. On the recruiting front, the Hogs are succeeding like never before in the modern era. Here’s where Arkansas comes in with the 247Sports Composite rankings for the class of 2023 after the commitment of Oklahoma’s No. 1 player, Luke Hasz:

And here’s what’s shakin’ over at the Rivals recruiting rankings for the same class:

Whatever your source, it’s clear this is a special time for a program that in the modern era historically rarely cracks the top 20. “Arkansas is really killing it in 2023 recruiting,” says 247Sports analyst Josh Pate. “They’re ranked in top five right now. Of course, you’ve got the cynic out there who would say, ‘Well, they won’t be top five when it’s time to actually put pen paper next year.'”

But Pate then makes the point that starting the process so high means the chances of falling low are slim to nonexistent. As evidence, he points to Razorbacks punching bag Penn State, which was previously ranked at No. 1.
“You don’t formally go from rank number one to outside the top 30. The point is, unless all the kids decommit, I can pretty much guarantee Arkansas is going to have a nice solid 2023 recruiting class.”

What is truly turning Arkansas into a destination program in 2022 is the recruiting prowess combined with transfer portal success. The former helps strengthen the Razorbacks down the line, but the former is the equivalent of a short-term boost. Both are instrumental to competing at the highlight levels in modern college football.

Officially, Arkansas won its last five out of six games in the 2022 season. But if you count the transfer portal season in the last few weeks as a “bonus” competition, then Arkansas has won more than that. With incoming transfers like Drew Sanders (former No. 1 player in state of Texas), Dwight McGlothern, Landon Jackson, Jadon Haselwood (Oklahoma’s leading receiver in 2021) and Latavious Brini (started 11 games for Georgia) coming aboard, the Hogs have five transfers rated as four stars or above by 247Sports. That ties with Ole Miss for the most in the nation.

For most of the last few weeks, Arkansas was ranked in the Top 5 of 247Sports’ national ranking portals. Currently, the Hogs are No. 6:

The fact that Arkansas and USC, which enjoys a lot more nationwide recognition and the benefit of a splashy new coach hire, are the only two teams in the top 6 of both the recruiting and transfer portal rankings says a lot about how far Sam Pittman, Barry Odom and Kendal Briles have renovated the Hogs’ national image from the days of Chad Morrisian drear.

But what separates programs like USC and LSU from programs like Arkansas, in the past, has been the former’s ability to leverage prestige to high recruiting (and now portal) rankings year in and year out — even after down years like what LSU is coming out of and what USC experienced at the end of Lane Kiffin’s tenure.

How can Arkansas keep this kind of success going when it doesn’t have the benefit of a prestigious, nationwide brand on par with the “blue bloods”?

A big key here will be hanging onto Sam Pittman for years and replacing Briles and Odom with great coordinators once they move to head coaching positions. Pittman needs time to get Arkansas to a point where it can not only reload with elite recruits, but also reload with great coaches (as USC did with Lincoln Riley and LSU with Brian Kelly).

Getting those elite recruits, both from high school and the transfer portal, is a first step, though. And that’s where this week’s biggest news should play a role.

On Wednesday, J.B. Hunt heirs Bryan Hunt and Mandy Hunt announced the launch of a new NIL program that will help Razorbacks develop their personal brands and hook them up with local non-profit organizations to work with. The goal of this Athlete Advocate Consortium (AAC) is “assisting in the development of student athletes to achieve their maximum potential in all aspects of their college experience with a focus on their personal interactions in their community and civic responsibilities,” as the press release said.

The J.B. Hunt affiliation marks the first time that leaders affiliated with one of the major Fortune 500 companies headquartered in northwest Arkansas have done something for the Razorbacks involving the NIL in a public way. This structure will make it easier for other big-money donors to contribute finances down the line, which should open up hundreds of thousands if not millions of dollars for NIL deals for Razorbacks in the coming years.

While JD Notae, hero of the basketball Hogs’ most recent win over Ole Miss, is the first Hog to sign with the AAC, no doubt visions of sugar plums and six-digit checks are dancing in the minds of Arkansas fans over what significance this could have for the football program.

For sure, Razorbacks making money off deals with non-profits they care about while contributing to good causes is a win-win.

“NIL policy has given college athletes the option to enter the business world, but with great power comes great responsibility,” Bryan Hunt said. “AAC connects these college athletes with a local non-profit, not only to give back to a cause they care about but to also bring awareness to all of the good these organizations are doing to help our communities.”

As good as this all is, it’s not the permanent game-changer some Razorback fans want it to be. A few other big-time programs have already started similar NIL non-profit programs. Just look at Texas football and the athletic department’s “Horns for Heart” program that has a website with an admirable mission statement followed up a borderline disturbing photo of hands covered with blood-like red paint.

Pretty soon, almost every big-time program in the nation will follow suit, says 247sports writer Brandon Marcello.
“Everybody else is going to join the party and they’re going to start throwing around comparable money,” Marcello said on John Nabors’ “Locked on Razorbacks” podcast.

“If you’re Arkansas and you can convince some of these bigger companies to jump in early, but also put in maybe a little bit more money than these other individuals are willing to spend within NIL, that could be advantageous for you.”

As Marcello sees it, within a couple of years there will be around 30 schools including Arkansas that have comparable programs to the AAC. So, whatever the athlete’s cause of choice — hunger, autism, literacy, cancer, etc. — he or she can partner with a non-profit repping that cause as part of an NIL program at almost any major school considered.

In the short term, this news should only help Arkansas retain its lofty status in the transport portal and recruiting rankings. “If you want to potentially get in the top five or top 10, get one of your greatest recruiting classes you’ve ever had, you better jump in quickly and do it now and get it done for the transport portal and for this 2023 signing class next February,” Marcello added.

“Because, after that, I think things are going to even out and the big dogs will be the big dogs.”

That means there is a lot more riding on Arkansas football’s 2022 season than simply keeping momentum going under Sam Pittman. For now, there’s a window of opportunity for Arkansas to become the kind of permanent “big dog” that regularly shows up at the top of Bookmakers.com national championship odds. But once it closes it won’t be easily opened again, given this developing NIL dynamic likely will help the rich get richer.

As well as the Razorbacks do in basketball, baseball, softball, soccer and gymnastics, none of that success will translate into generating the kind of cachet and attendant NIL money to compete with the likes of USC, LSU and Georgia if the Razorback football team loses steam.

It’s important to keep this mind when the new contract for Sam Pittman is announced. Yes, he may get an extra million or two per year over what some fans thinks he deserves based on past performance. But, despite Hunter Yurachek’s stated insistence on pay for performance, the reality of this new emerging market means compensation should also reflect what could be lost in the future.

A few millions will be a drop in the bucket compared to what’s on the line with the football’s team success and the multiplier effect that success can have in so many areas.

See Brandon Marcello’s interview below. He talks about the questions of transparency into NIL finances (10:05), why Arkansas ranks with Michigan State in doing a “perfect job” handling the transfer portal (16:14) and how Kendal Briles orchestrates one of the “most secretive systems in college football.” (25:00)

The Hunts Explain Razorbacks, NIL and the AAC

Pig Trail Nation’s Alyssa Orange sat down with Bryan and Mandy Hunt to discuss why they started the Athlete Advocate Consortium. Here are some of the most interesting excerpts:

On how much JD Notae is being paid:

Bryan Hunt: “The reason we wanted to tell our story was so that the story be told right. JD is not making a significant amount of money for this. I mean, it’s not a life changing dollar amount for JD and certainly nothing what he’s capable and potentially doing.”

“I think it’s important that the athletes get compensated and most of the deals that we’ve seen or talked about with the athletes, they’re not getting compensated enough for what they’re doing. But it’s in the early stages. I think that’ll change over time.”

Accounting service that the AAC provides:

“The first service we provided was the other night during a dinner. I looked at all of them and say, ‘Now, did everybody pay in their quarterly taxes to date?’ And I didn’t get very many responses of yes. I said, ‘That’s okay. It’s your first year as a tax owner. You actually have until the first quarter of 2022 and I’ll keep that date in mind too.'”

“So it’s obvious that while they are enjoying the aspects of making their own income, they’ve got to learn the responsibilities. And keep in mind, the University of Arkansas has done everything they can to help them. They just weren’t thinking about that at that time. So what we do is we have accounting people that can help them.”

On working with more organizations:

“There’s more to come, there’s more on the way. But our focus is to helping both aspects. Us, as a family, we want the athletes to do well while they’re here at the University of Arkansas and we want the community programs to do well, because then we both benefit. We all benefit if those two come together and work well.”

“But it’s not really a well-drawn out plan, other than that we have a good cause in our heart and we think this will be successful.”

Make sure to check the entire in-depth interview here: