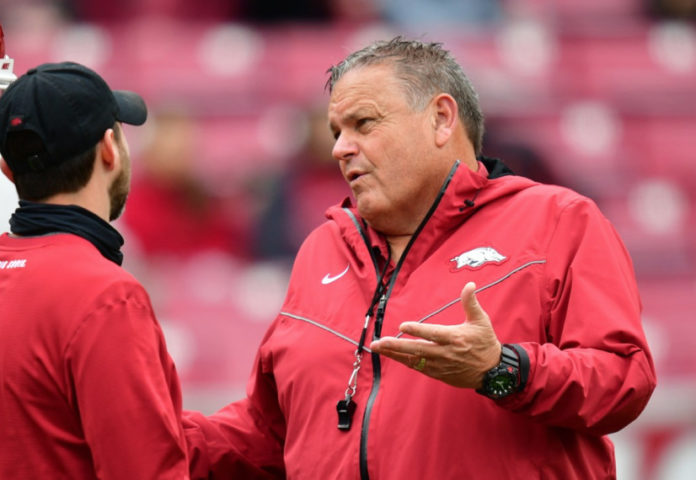 Despite the disappointing class of 2022 recruiting ranking that kicked off February, Arkansas football’s offseason has been mostly successful. For starters, head coach Sam Pittman will have both Barry Odom and Kendal Briles coming back for a third consecutive season. That continuity is bigger than any five-star recruits that the Razorbacks could have signed.

The Hogs are also off to a great start with the class of 2023, currently ranked No. 4 nationally according to 247Sports composite in the aftermath of getting commitments from the likes of Oklahoma’s No. 1 recruit Luke Hasz:

247Sports also ranks how teams are doing in the transfer portal, which has become more important than ever in the wake of the one-time transfer rule that allows players to freely come and go without sitting out a season. This national ranking primarily looks at how the transfer was rated in high school for its score. Last season, Arkansas ranked No. 25 here.

However, as you see below, this year is a much different story:

That’s No. 3 in the SEC, which makes a lot of fans feel a lot better after finishing No. 13 in the traditional class of 2022 rankings.

However, it should be noted that while most all schools lose more players than they get from the transfer portal, Arkansas’ disparity is pretty wide for a school that depends on the portal and doesn’t have elite recruiting classes. Consider how Arkansas ranks No. 5 nationally in sheer number of outgoing transfers.

The above stat doesn’t account for two Razorbacks who entered, but then withdrew, from the portal. On the positive side, this shows Arkansas football coaches are essentially pruning out players who weren’t going to get much playing time (with notable exceptions like starters Vito Calvaruso, Greg Brooks Jr. and Joe Foucha) and would do better at much smaller schools.

As a consequence, only four former Hogs have landed with Power 5 programs. But the Razorbacks lead the nation in players heading to FCS and D2 programs:

No question, Arkansas is upgrading its roster with its upcoming talent. Yet, as 247Sports’ newest rankings show, the bigger name programs are still finding ways to sneak ahead of the Hogs even when it comes to the transfer portal.

Here, the average player rating is all that matters, and Marcello and company simply distilled that number to reach a net gain or net loss via the 247Sports rating system.

In this new rating, Arkansas ranks lower. Its “net rating gain” of +4.19 puts it at No. 5 in the SEC, below No. 1 Alabama, No. 2 Ole Miss, No. 3 Texas A&M and No. 4 South Carolina. It’s important to remember that Alabama and Texas A&M don’t lean on the transfer portal as much as other programs because they tend to retain more players and their loaded recruiting classes fill plenty of holes.

“The net-rating gain of 9.94 will likely drop should the Tide add more players to offset the 17 departures, but the average rating will likely remain near the top of the conference,” he adds.

Meanwhile, the Aggies have just added one transfer so far (former LSU quarterback Max Johnson) and so on the strength of that one player get the No. 3 rating. If an outlet were to devise a rating based on projects contributions of incoming transfers, then Arkansas would no doubt finished higher than Texas A&M here.

Here’s what Marcello wrote about the new Hogs:

“Arkansas has successfully countered a mass exodus with top talent. Five of the Razorbacks’ portal prospects rank higher than their biggest loss (cornerback [Greg Brooks Jr.]) and every new Hog was formerly a Power Five starter or blue-chip prospect out of high school.

The nation’s No. 1 linebacker (Alabama’s Drew Sanders) and the second-best edge rusher in the portal (LSU’s Landon Jackson) are on board with Arkansas. Georgia safety Latavious Brini comes to Arkansas with a higher rating than he had out of high school and ranks as the nation’s fourth-best safety in the portal.”

All things considered, these ratings show that the average rating of the stars flocking to Alabama and Texas A&M are higher than those arriving at Arkansas. No surprise there, as that simply echoes what is happening on the recruiting front.

For the Razorbacks, however, the question is how many of these incoming transfers will be coached up into home run additions like Tre Williams, Markell Utsey and John Ridgeway were last year. The ability to coach up 2 and 3 star talent to level of blue chips has always been a hallmark of the best Arkansas football teams.

Now, for the first time, Arkansas coaches get to start that process with a roomful of guys who were blue chippers from the beginning.

*The NCAA allows each team to add a maximum of 7 players through the transfer portal, along with 25 scholarship players through the most recent high school recruiting class. But, as you saw in a graph above, a few of the teams ranked above Arkansas have gotten a lot more incoming transfer commitments than the Hogs (since there is a way to “cook the numbers,” as Marcello puts it). How many of those commitments actually end up on campus and on scholarship is something to monitor down the line, especially once the secondary transfer season begins after spring break.

A Recap of Arkansas Football Transfers

To Arkansas’ credit, they landed some haymakers in the portal this offseason. Arkansas, along with SEC East rival Florida, are the only two schools in the country (at this point) that have landed four “four star” players in the portal. This supplemental recruiting strategy can and has paid huge dividends for the Razorback program while it rebuilds.

There is zero chance last year’s defense would have been as serviceable as it was without Tre Williams, Markell Utsey and John Ridgeway III coming in from other programs. Each of those guys played big roles anchoring the defensive front. Arkansas was young and inexperienced in that department so pulling those guys in made for a nice fit and filled a gaping hole in the Razorback defense.

The same could be said for what Sam Pittman has brought in thus far for next season. A potential replacement for Burks with OU transfer Jadon Haselwood. A speed edge rusher in Landon Jackson from LSU to replace Tre Williams. The previously mentioned McGlothern is an experienced SEC cornerback that should replace Montaric Brown who passed on his last year of eligibility by opting for the NFL. And finally Alabama linebacker transfer Drew Sanders will glide right into spots vacated by the graduating Drew Morgan and Hayden Henry.

All highly recruited dudes from name brand schools. All should be immediate, no doubt about it starters day one. All but Landon Jackson have played big time college football already as well. Talent plus experience will go a long ways towards Pittman building the program to be perennial 7-9 wins a season versus a flash in the pan.

The Razorbacks (and frankly any program) can’t build their program around transfers but they can definitely serve as stop gap measures to fill voids that arise through recruits that don[t pan out, injuries, transfers out and so on. The high school recruiting is still the lifeblood but the transfer portal can be a quick fix option. And as far down as Arkansas was just 3 seasons ago, there will be some gaps in talent amongst various positions for another season or two.

The Importance of Culture

Incoming freshman classes relating to older guys that have been through the program is how you build culture. Not with one and done transfers. The transfers will bring elements from their former programs but they must also integrate into how Razorback football under Sam Pittman functions. The good news on these four players coming in is they have multiple years of eligibility left. Pittman has an excellent reputation in college football becaus of his genuine personality and ability to connect with players. It’s real and I am sure it played a huge role (along with playing time and likely NIL deals) in these four transfer picking Arkansas.

Arkansas has several other spots to fill as well and is actively looking in the portal. Defensive linemen Jaxon Player (Tulsa to Baylor) and Mekhi Wingo (Missouri to LSU) opted elsewhere but were coveted transfers by the Razorback staff. There will also be fresh faces in the portal, especially after spring ball when the writing is on the wall for some players. Lord knows the Hogs could use an interior defensive lineman.

On offense, even though the Razorbacks have recruited well at the tight end position, the group is young and that could be a spot they look to fill in the portal. Running back and receiver depth looks to be better than good so maybe an offensive lineman or two would make sense. Former North Carolina and USF quarterback Cade Fortin has joined the program as a walk on. Fortin started multiple games at both schools and could make a run at the backup quarterback position behind KJ Jefferson.