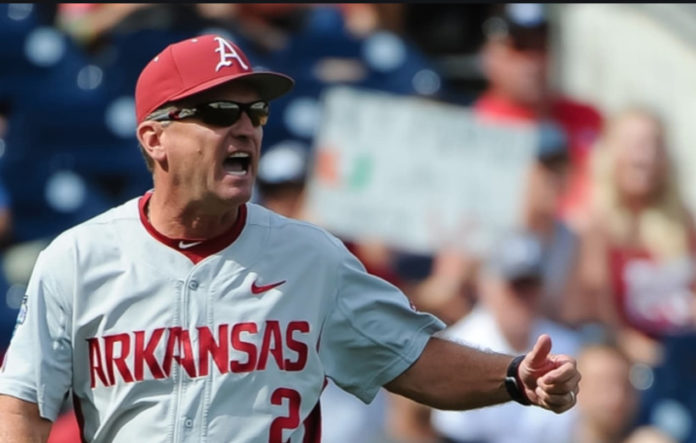 No matter which sports direction you turn, it seems we are living in an era of the Hog. Of the Razorback team sports, the program that has enjoyed the most consistent success this century is clearly baseball – but there is still some unfinished business. It’s time Arkansas baseball finally puts a ring on to prove it is the best program in the country.

The Razorbacks have been beating down the door to a national championship, but have not yet broken through. It’s a comparable situation to Gonzaga in college basketball where the Zags are recognized as a title contender every season but have yet to break through for a national title. Both the baseball Razorbacks and basketball Zags have felt the searing pain of a close national runner-up finish in the last five years.

This year, the Razorbacks have many new faces on the field and in the bullpen that can lead them to the promised land along with the remaining talent that already overloads the Arkansas dugout.

The Hogs have been one of the best college baseball programs over the past 20 years under head coach Dave Van Horn, just as Mark Few’s bunch at Gonzaga has been the most successful regular season program of the last couple decades in basketball.

Consider that in the past five seasons, the Razorbacks have an SEC-best combined record of 200-78.

In the most recent years, the Razorbacks have been top contenders. In 2018, the team was a dropped foul ball from winning the championship. They went back to Omaha in 2019, but went 0-2 in the World Series. After a shortened 2020, the team was the No. 1 team for almost all of 2021, including being the regular season SEC champions and winning the SEC tournament before getting upset in a Super Regional heartbreaker.

The 2022 season, which starts Friday at home vs Illinois State, has every reason to be different.

It’s just a shame they won’t get the TV time they deserve. Arkansas is tied with South Carolina and the three worst SEC teams from 2021 for the lowest amount of nationally televised games in the conference at eight. Mississippi State, defending champions whom Arkansas swept in their home, have the most with 12.

According to Perfect Game, the Razorbacks brought in the fourth ranked class of 2021, third in the SEC. This freshman class will help a lot where the 2021 squad was weakest, pitching depth.

The Hogs did not have the depth to combat the injury to Peyton Pallette last season and it cost them the Super Regional and possibly the championship. Pallette left a relief appearance in the final series of the regular season against Florida with an elbow injury. This season, Pallette will require Tommy John surgery for an UCL injury and will miss the entire season.

The injury coming before the season gives Van Horn time to game plan around Pallette, where last season he had to adjust the rotation on the fly in the postseason.

The 2021 class is bringing in the top left-handed pitcher from Texas, Hagen Smith, the top right-handed pitchers from Mississippi and Wisconsin, Brady Tygart and Vincent Trapani and the No. 2 ranked right-hander from Missouri in Nicholas Moten.

Along with the recruits, Van Horn has said Connor Noland is looking better than he ever has so far this year. He punched out seven over 4.2 innings in his public scrimmage appearance and Van Horn said his slider looked nasty.

It will be impossible to replace 2021 Golden Spikes winner Kevin Kopps with any one player, but the depth should help out a lot. The Razorbacks lost starting position players center fielder Christian Franklin, catcher Casey Opitz, third baseman Cullen Smith, and designated hitters Charlie Welch and Matt Goodheart.

The Hogs brought in Oklahoma transfer and former top-50 national recruit Jace Bohrofen, the top Arkansas recruit from 2021 Peyton Stovall and Kent State transfer Michael Turner along with a few top-200 2021 recruits in Drake Varnado and Kendall Diggs as well as other talented hitters.

The Hogs are also returning a ton of talent in their lineup. The Razorbacks are bringing back the top-three home run hitters from 2021 and four of the top-five team leaders in RBIs.

The trio of Robert Moore, Brady Slavens and Cayden Wallace are all back in Fayetteville in 2022. Last season, the trio led all everyday starters in batting average and home runs and the trio were all in the top-four RBI leaders on the team. (Christian Franklin was second in the team with 53 RBIs and Charlie Welch led the team with a .388 batting average in 2021 but only started 15 games.) Jalen Battles is returning to play shortstop and came in fifth on the team in RBIs.

Preseason All-American Robert Moore led the team with 16 home runs last season and hit .283 with 53 RBIs. Preseason SEC second-team selection Brady Slavens led the team with 63 RBIs to go with a .284 average and 14 home runs while his preseason Sec second-team teammate Cayden Wallace is coming off a very good freshman campaign where he hit for a .279 average with 14 home runs and 44 RBIs.

The lineup will still be one of the best in the country despite losing good talent. The Hogs retained most of the core lineup and this recruiting class will also help recreate a similar season to 2021.

The biggest question mark will be how the freshman pitchers perform. There is a lot of talent there. On paper, this rotation is much deeper than 2021.

The talent should overcome and grow as the season progresses. Pitching has been good in fall camp, with pitching coach Matt Hobbs noticing a low amount of walks.

There may be growing pains, but as the season goes on the Arkansas pitching staff will be one of the best rotations in the country.

The depth and talent of this Arkansas baseball roster should make them the favorites to win the national championship. Sure there are questions with pitching and the loss of Peyton Pallette, but Arkansas has as good a chance to win it all as anybody — and a better chance than most. After three postseasons ending in heartbreak, this team has the talent to go all the way.

The SEC is just as loaded as ever in 2022. The SEC brought in 10 of the top-20 recruiting classes on Perfect Game. Florida had the top-ranked recruiting class of 2021 with Vandy second and Tennessee fifth.

Arkansas brought in four top-100 recruits and seven from the top-200. Florida signed four top-100 freshmen and 10 from the top-200. Vanderbilt brought in four and 11. Tennessee had only two top-200 recruits, but one of them includes No. 17 overall recruit Chase Burns who is the second highest ranked recruit that did not sign with a MLB team, behind Alex Mooney of Duke.

UCLA brought in the top non-SEC recruiting class with four top-50 recruits making it to campus and six top-200. None of the non-SEC teams that made it to Omaha in 2021 brought in a top-20 class.

The SEC looks like it will dominate college baseball yet again, and Arkansas will look to compete among the best of them. The top-four recruiting classes seem to be a level above the rest and with Arkansas maintaining its core bats, they should run away with the west and compete for the overall SEC title.

Overall, Arkansas, Vanderbilt and Tennessee will probably dominate the SEC and the rest of the field in 2021. But Arkansas got the advantage on them last season, going a combined 4-1 against the two programs. That kind of experience matters, and should inspire confidence that will rub off on the new players. Although Arkansas isn’t a Top 5 in most preseason polls, the Hogs should be favorites to go all the way.

And if that happens, look for 2022 to be the year that the sporting world recognize Arkansas as the home of premium college sports.

For more on Arkansas baseball, see: