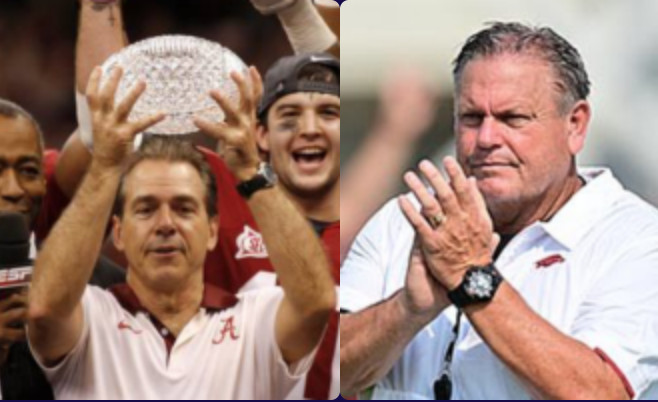 Nick Saban, we’re reminded to high heaven, has earned his stripes as the best coach in college football history.

It’s hard to argue with an all-time record seven national championships and overall winning percentage of 80%, including 88% at Alabama. The 70-year-old Saban has achieved this through awesome recruiting built on great Xs and Os and assembling an elite staff time and again. He racks up wins with a proven formula for success that he calls “the process.”

Given that Razorbacks head coach Sam Pittman isn’t too far removed from the Saban coaching tree through former Saban disciple Kirby Smart, how does Pitman’s own style compare to that of the greatest ever?

Before diving into that, let’s take a deeper look at Saban’s proven formula.

His core formula centers on owning the line of scrimmage on both sides of the ball. Yes, Bama has first rounders all over the field every season but it’s those big fellas up front that make the difference. Their big people are elite level with incredible size and skill that allows their quarterbacks all day to throw and tailback gaping holes to run through.

Alabama’s early November game vs LSU was an anomaly with all the sacks and QB hurries the Crimson Tide surrendered. Just as Orgeron did the following week vs Arkansas, he reached into his fading bag of tricks and blitzed like crazy the entire game. The Tigers hadn’t shown that on film so they caught Alabama off guard.

Saban’s model football program also sticks to tradition and you never, ever hear a Bama player talking trash through the media. Alabama wears the same home and away uniform set every game. The classic helmet with the number on both sides and the two stripe pants complimented by a plain crimson red or white jersey. The same uniform the Crimson Tide has worn for decades. Unlike Oregon, which wears what seems to be a new uniform every game. (There’s some Nike-fueled capitalism for ya.)

Nick Saban is also adaptable, especially on the offensive side of the ball. Recognizing a seismic shift in college football, he got with the times and modernized the Bama offense. In 2007, Saban’s first year there, Alabama threw for 2,919 yards and 19 touchdowns. In 2020, it was 4,656 yards and 42 passing touchdowns. The days of lining up and running it down your throat are gone. But truth be told, Bama could still do that if they really wanted to.

When arriving in December 2019, Pittman had a much deeper hole to dig Arkansas out of than most new SEC coaches not involved with Vanderbilt ever have to experience. Pittman basically counteracted just about everything predecessor Chad Morris did wrong regarding the culture of the program.

Morris helmed a fractured locker room and apparently didn’t know how to build good relationships. Pittman is like everyone’s fun uncle. His rapport with people is genuine and that shows in how hard the Razorbacks compete for him and how they interact. The Georgia Bulldog players lining up to give Coach Pittman a hug after the ‘Dogs pasted the Hogs 37-0 speaks volumes.

Relationship building with recruits, their parents, his players, assistant coaches and fans is a big, big part of the formula Sam Pittman believes will get the Razorbacks to the upper end of the SEC. He also wants Arkansas to be big, physical and tough in the trenches. Pittman knows what a good SEC football team looks like when they step off the bus and he and his staff are working like heck to bring those guys to Fayetteville.

In short, the 59-year-old Pittman knows what works and what doesn’t. His ego doesn’t force him to break the mold to try and be original. He deserves a lot of credit for sticking to what he believes and will steadfastly build the Razorback program from that mold. That certainty comes from being a career assistant at many big-time programs that did some big-time winning. All that experience, likely even some dating back to his playing days, melds together to produce what is taking shape as the “Pittman process.”

Results matter and after a little over a season and half, it’s working. Respectable in 2020, up to No. 8 earlier this season and now ranked No. 21 in the nation. NOBODY saw this coming, this good, this fast when he was hired. He was an unknown commodity as a head coach and inherited a disaster.

Lane Kiffin at Ole Miss, Bryan Harsin at Auburn, Josh Heupel at Tennessee and maybe even Mike Leach at Mississippi State didn’t walk into a situation quite as bad as Pittman. South Carolina’s Shane Beamer has/had his hands full and has the Gamecock playing much better than expected. Clark Lea at Vandy…well, he’s not coaching Vandy baseball.

The Razorbacks have lost a mind-numbing 13 straight games to Alabama but for the first time in a very long time, Arkansas fans feel the Hogs have a real shot at knocking off Alabama on the road.

The Hogs and Crimson Tide clash at 2:30 pm in Tuscaloosa on Saturday. Currently, Alabama is a 20.5 point favorite according to the best online sports betting sites linked to Asiabet.

The fact is Alabama isn’t as strong as in recent years. That, combined with the Razorbacks’ trending upward, does make it seem like a closer Arkansas vs Alabama game than usual could be in the offing. While Sam Pittman possesses the affable personality of an Ed Orgeron, he more closely aligns with Saban in building a football program.

He wants to be good up front and hires coordinators like Kendal Briles to run hyper-modern offenses. Plus, the Hogs under Pittman wear the same uniform set each game. Pittman’s no dummy, as Saban isn’t a bad guy to emulate. The trick will be can Pittman do it with 3 and 4 stars while Bama seems to have 5 stars at every position.

I’m not saying that Arkansas is going to overtake Alabama atop the SEC. That is a colossal mountain to climb as long as Nick Saban is running things in Tuscaloosa. I am saying Pittman is following a lot of the same core principles of Saban’s program to get the Razorbacks to the upper tier of the SEC. That is possible.

Pittman’s former boss, Kirby Smart, has elevated Georgia’s status following the Saban plan with a little personalization. His top-ranked 2021 squad looks, plays and wins like many Bama teams of the past. Defense is remarkable and the offense gets it done. We will soon know if the Bulldogs can handle the bullseye on their back and hoist the national championship trophy in January. There are some questions with the Bulldog offense but the same could be said for some of Saban’s past national champions.

As Pittman continues to improve the depth and talent level within the Razorbacks program, Arkansas’ ability to consistently compete with the year in, year out bell cows of the league will keep climbing. Coordinators will come and go, which will cause some tweaks to offensive and defensive philosophies. That’s part of football and Pittman will be prepared for that. He’s got an extensive network to pull in qualified coordinators due to his longevity and overwhelming respect in college football circles.

The Razorbacks football program is on the right path. This 2021 season is not a flash-in-the-pan, gimmicky good season. Pittman’s process has taken the Hogs from the bottom of the barrel to solidly in the middle of the pack in the best conference in America against the No.1 schedule in the country. That’s nothing to sneeze at given where this program was in 2019.

Arkansas football fans should be thankful Pittman had a clear plan on how he wanted to build the program back and he’s stuck to it. And will continue to stick to it. That’s the keystone to swinging Razorback football back to competitive again. Nick Saban influenced Kirby Smart. Smart influenced Saban. Smart (along with a few others) influenced Pittman.