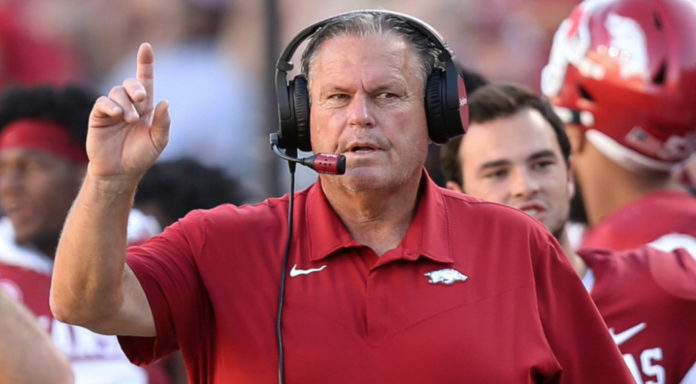 We’re not sure if you heard, but Texas A&M just landed the single greatest college football recruiting class of all-time!!!!!

Oh, and by the way, Arkansas finished ranked No. 28 in the country. Not bad until you consider that 247Sports composite ranking is 13th in the 14-team SEC. That first number is perhaps not so disappointing. The second certainly is.

Initially, this column was going to be about that disappointment, about how Arkansas, even with everything going for it on the field this season and in the transfer portal this offseason, still got beaten on the recruiting path by traditional college football stalwarts like Kentucky, Missouri, Arizona and Indiana. And it still needs to be said that Wednesday was, ultimately, a touch of a letdown.

However, and this is a big however, one giant rub occurred after talking with the creator of this excellent site. That is:

“But, oh, recruiting!” they say. Why? Because recruiting is the lifeblood of the program? No. It’s “Oh, recruiting!” because college football – sports, in general – are barely about what actually happens *during* the game anymore. For long has the offseason, in every major American sport, been called the “silly season,” but the proliferation of know-it-all folks with keyboards has destroyed any sense of fun (if it could ever have been called that in the first place) of that silliness.

The hostility is too much. The constant speculation about why four-star safety Myles Rowser and Arkansas turned out not to be a fit on Wednesday was absurd. Besides, can anyone other than the folks who made the 247Sports Composite Ranking algorithm actually explain how the results are tabulated? Heck, there’s an entire page dedicated to it, but most of us maxed out at one three-hour college statistics course.

Recruiting is only a narrow part of the quality of a football program. That’s good news if you’re an Arkansas fan for more reasons than the disappointment of Wednesday. Almost no one would proclaim Missouri, Arizona or Kentucky are in a better position than the Razorbacks going forward, no matter what the arbitrary recruiting rankings say. While the rankings themselves are not completely arbitrary, the difference between the 96th best player in class and the 192nd best player in the class is largely negligible.

Below is a list of the Arkansas football overall recruiting rankings over the last 11 years. The first number is the national 247Sports Composite ranking, then the SEC ranking. Each year is followed by the top five classes from each year dating back to 2011 and the national champion the following fall. The similarities throughout are obvious. (Note: teams’ names have been shortened for design purposes.)

The bluebloods are the bluebloods. Alabama is in every single list. Ohio State is in all but three. Georgia is in each of the last six. LSU is in half. Texas and Florida State are in almost half. The best teams in college football have excellent recruiting classes typically. If Arkansas truly seeks a national championship, a top-five class is probably required. A top 10 almost certainly is. In every national championship season but one did the team that won the title have a top-five recruiting class the year before. The only negative to that rule is Clemson in 2016, which had the No. 9 class the season before winning it all.

The question shouldn’t be whether Arkansas can win the national championship in 2022. No offense, but it isn’t happening no matter how well KJ Jefferson plays. Such a win would be a miracle of all miracles. Right now, make that bet in Las Vegas and get +20000 on it. America’s sports gambling capital has Syracuse, Iowa State, Maryland and even South Carolina with better odds. Not because Las Vegas thinks those teams are better than the Razorbacks, either, but because the SEC West is such a bear.

Arkansas is playing the long game with 120ish other teams in the FBS. Whether Arkansas finishes 28th or 21st or 31st is moot. The differences are infinitesimal, especially over the course of three different classes when a bulk of a roster is built. What is significant is how the players turn out when they’re on campus. You know, what they actually do on the field.

Where Sam Pittman Has Proven Himself

ESPN.com re-ranked the recruiting class of 2019, for example. For the Hogs, it’s most notable as being the class that landed Treylon Burks as the top player in the class (per 247Sports’ composite rankings, not the ESPN exclusive ones, which have tight end Hudson Henry as the top player). Undoubtedly, Burks was a get. He left Arkansas in December after threatening to revamp the top of the wide receiver record books had he stayed another season. Now he’s a projected first-round pick.

Some players who weren’t considered absolute locks from the class, though, have turned out to be. KJ Jefferson clearly established himself as the quarterback of both now and the future with his 2021 season. Jalen Catalon was a freshman All-American and en route to similar honors this year before his season was ended by injury. Greg Brooks Jr. started three seasons in the defensive backfield before transferring to LSU. Trey Knox has re-established himself as a player at tight end from wide receiver. And four Arkansas starters on the offensive line – Ricky Stromberg, Myron Cunningham, Beaux Limmer and Brady Latham – were in the class, too. All of them but Knox were ranked outside the Top 300. The entire offensive line graded as three-star prospects.

That class came in at the end of the Chad Morris era. They are, ostensibly, his players. In reality, we know better. They have displayed talent beyond their star status. But that talent has largely been nurtured by Sam Pittman and his Arkansas football staff just the same as the 2022 class’ will be.

So maybe, just maybe, take a break from the madness and minutiae of those rankings. Maybe trust this is what Arkansas football is in the 20th century – a good, not great, recruiting program with potential to make waves in the right circumstances, as has always been the case.

Except now it has a coach who clearly knows what he’s doing and appears to be in it for the long haul.

*A quick, highly accurate primer on Gen Zers for the uninitiated: