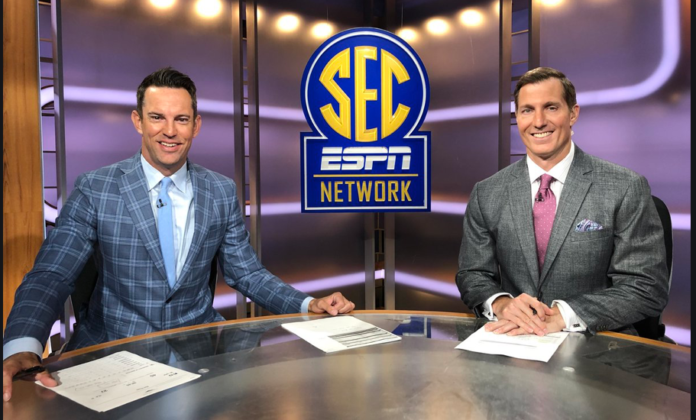 That’s easier to say than do when the offending party refuses to admit any error, and when said error cost you an entire game.

Yes, at this Arkansas-Auburn game and the rampant injustices it now represents in the mind of every practically every college football fan are squarely in the past. The Almighty SEC hath spoken on the matter of whether Auburn turned the ball over to Arkansas at end of the game or not, and what it has said is absolutely gibberish.

It’s not just Arkansas fans who recognize it.

Below is Clay Travis, formerly of OutKickTheCoverage, who as a dyed-in-orange Tennessee fan has rarely had anything good to say about the Hogs in the past. (In fact, he once said Arkansas should be kicked out of the SEC and replaced by Arkansas State.)

Travis makes it clear he thinks the referees’ call, which led to a 30-28 Auburn win, is a travesty. He asks his Auburn fan co-host if he wants to apologize for his school theft of a win, and the fan admits to “getting away with officiating murder.”

The hosts of ESPN’s “Thinking Out Loud” are also all pro-Arkansas on this matter. Not only did the refs steal this game, they agree, “but we all know Arkansas is a real contender now and they’re for real,” analyst Brandon Boykin (and former Georgia Bulldog great) says below.

All this is great, but though since the ordeal the SEC office itself has admitted no wrong.

Fortunately, though, at least one person representing the SEC has come forward and set the record straight.

Peter Burns, a long-time host of the SEC Network, which serves as the official mouthpiece for the conference, didn’t cut corners when addressing the controversy on a recent episode of “SEC This Morning.”

“That’s a fumble, a backwards pass and the league got it wrong. The replay got it wrong. And that’s unfortunate. And I think even Auburn knows that they lost that game.”

Hogs fans if you missed it… @PeterBurnsESPN and @ChrisDoering sit down and talk about the controversial call in the Arkansas / Auburn game. pic.twitter.com/SuUM2saAv8

Bravo, Peter Burns, for speaking up for the truth when nobody else in the SEC office — or on the SEC Network — dared do so. Granted, ESPN technically owns the SEC Network, but it’s also a de factor partnership. The SEC Network wouldn’t continue to exist without the SEC bringing in more than $700 million a year in revenue. These league show hosts have every incentive to keep the cash cow happy.

Breaking down what the call hinged on

The Arkansas-Auburn call ultimately hinged on an issue of whether there was “clear and immediate” recovery of the football by Arkansas defensive back Joe Foucha.

As co-host Chris Doering says in the “SEC This Morning” clip above, “I think the problem that I have with it is the subjectivity of the idea of immediate and clear recovery. Like the point when players are deemed to have stopped and been affected by the whistle blowing and the officials calling it in, signaling an incomplete pass.”

“We’ve seen a lot of inconsistencies even last year with the Missouri-South Carolina game. …. It was deemed to be a fumble and Missouri ultimately picked it up after a bunch of players had stopped. I think there has to be a way to get that right in that situation, because there’s too much on the line for that not to be able to be officiated correctly.”

See below for the situation Doering mentions:

Walt Coleman is an Arkansas native and Razorback fans who refereed for four decades, including a long stint in the NFL.

Coleman further broke down the situation on the Buzz 103.7 FM, saying if Foucha had initially recovered the ball, “they would have reversed the call and given the ball to Arkansas.”

“But he didn’t recover it. It squirted out and went off to the side.”

And then there’s a lag of a few seconds before he can recover it again.

In the end, it sure would be nice to have some satisfying resolution to the matter. Perhaps something like this:

Alas, nothing of the sort is coming down the chute from Donald Trump, Greg Sankey or anybody else.

But it helps to know that at least one person close to the SEC office can publicly admit the truth of what happened.

Here are are details on this play and the SEC’s ruling of it: