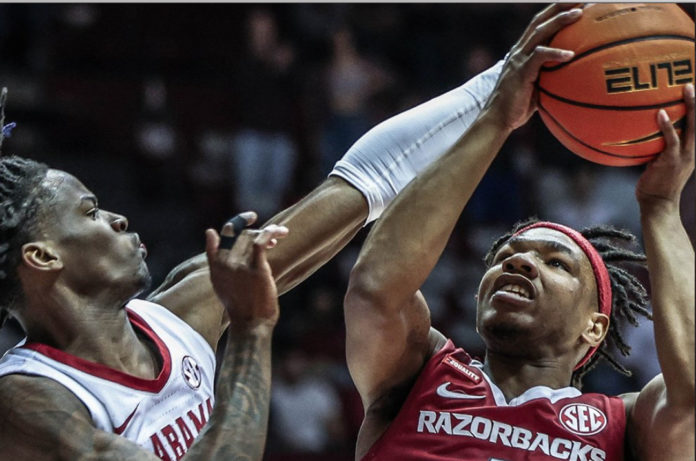 The Arkansas Razorbacks saw their nine-game win streak come to an end in dramatic fashion on Saturday at the hands of the Alabama Crimson Tide. A last-second, half-court prayer from Devo Davis would have given the Hogs the win, but the basketball gods did not answer the call as Arkansas fell 68-67 on the road. That loss moved Arkansas’ record to 19-6 (8-4), landing them at 4th in the SEC behind Auburn, Kentucky, and Tennessee – teams that make up three of Arkansas’ last five games on their schedule.

Despite the loss, Arkansas didn’t drop from its 32nd ranking in the NET rankings, while Alabama moved up to 22nd. On top of that, the Razorbacks actually improved in the AP poll, going from unranked to No. 23. No doubt, that was due to last week’s home win over No. 1 Auburn.

Next up for the Razorbacks is a Tuesday night rematch against the team in which they started their nine-game winning streak, the Missouri Tigers (10-14, 4-7). The one is in Columbia, MO. In their first meeting, Arkansas started their super-sized lineup consisting of JD Notae, Au’Diese Toney, Trey Wade, Kamani Johnson, and Jaylin Williams for the first time. The Hogs rolled the Tigers in Bud Walton Arena, holding them to only 43 points, the lowest points allowed to any team this season. Arkansas also poured in 87 points of their own, their second-highest point total against an SEC team this season behind only their 99-point outing against Georgia on the road.

Missouri, ranked 138th in the NET Rankings, is 9-4 in their last 13 games, including 2-1 (wins over Texas A&M and Ole Miss) in their last three. Perhaps the Tigers’ biggest win of the season was at home against Alabama back on January 8th, when they beat the Tide 92-86. Since then, they have suffered five losses to teams ranked outside the top 44 NET Rankings: Iowa State (44th), Florida (50th), Texas A&M (73rd), and Vanderbilt (76th).

What to Expect When Missouri Has the Ball

Kobe Brown, a 6-7 forward, paces Missouri in points and rebounds. The junior scores roughly 12.9 points per game to go along with 8.1 rebounds. He’s also second on the team in assists with 2.6 per game. Brown does most of his damage inside the arc, leading the team in 2-point attempts and free-throw attempts at 7.4 and 4.3 respectively. The defensive presence of Razorback forwards Trey Wade, Kamani Johnson, and Stanley Umude did well in limiting Brown’s production the first time these teams met. The junior shot only 3-11 (27.3%) from the field including 0-4 from 3-point range against the Hogs.

Experienced guards Jarron Coleman (junior) and Javon Pickett (senior) typically join Brown in the starting lineup. In that first Arkansas vs Missouri game, the two combined to score 23 points on 43% shooting, though they only shot 1-5 (20%) combined from long range. Coleman also leads the team in assists at 3.0 per game. Amari Davis, another junior guard, started the Tigers’ first 10 games of the season but has only started three of the teams’ last four games. He’s second on the team in scoring at 10.1 points per game, but shot 0-3 against the Hogs earlier this season and finished with zero points.

Trevon Brazile is a 6-9 forward who will likely start the game matched up against Jaylin Williams. The freshman averages 5.6 points and 3.8 rebounds per game on over 64% shooting from inside the 3-point arc. He started the Tigers’ first game against the Hogs and only three points on 1-3 (33%) shooting from the field.

In the Tigers’ last game, a 74-68 win over Ole Miss, they combined to shoot 7-14 (50%) from distance as a team and had five players score at least 13 points: Javon Pickett (14), Ronnie Degray III (14), Kobe Brown (13), Amari Davis (13), and Dajuan Gordon (13). As a team, they rank 347th in the nation in 3-point percentage at 28.5% on the season. However, they’ve shot over 35% or better in seven of their last nine games, including over 50% twice in that stretch, both against the Ole Miss Rebels. Coleman specifically has seen his 3-point percentage climb from 29% in his first 13 games to nearly 37% over his last nine contests on roughly five attempts per game.

The loss at Alabama was Arkansas’ first defeat since a visit to College Station on January 8th. They fought back from a sizable deficit in the second half against Alabama and took the lead with under a minute to play. A late-game JD Notae 3-point attempt missed off the backboard before bouncing out of bounds off of Au’Diese Toney. Notae, however, still shot 40% from long range for the game.

Unfortunately, that was one of the few bright spots in Notae’s performance. Just four minutes into the game, the senior guard found himself on the bench with foul trouble, then proceeded to play only 24 minutes despite averaging nearly 34 minutes per game this season. He scored only 12 points, his lowest since a 10-point performance against UCA at the beginning of December. Notae also shot 36% from the field to go along with three turnovers and three fouls.

His ill-advised 3-point attempt late in the game did nothing to help his percentages.

Notae had the opportunity to dish the ball to a wide-open Jaylin Williams at the top of the key, drive for a cleaner look at the rim, or even draw a foul rather than throwing up a three that hit the backboard. This was a mistake that will undoubtedly have an impact on Notae’s decision-making moving forward, as he indicated on Twitter after the game:

The SEC Player of the Year candidate is not the type of player to easily lose confidence in his offense, but his ability to bounce back defensively and stay out of foul trouble will directly impact the Hogs’ success against Missouri.

Jaylin Williams continued his streak of impressive performances despite the loss. He scored 22 points – a career-high – to go along with 10 rebounds and an assist. This marked Williams’ seventh double-double of the season and second in a row. In his last 10 games, the 6-10 sophomore is shooting 45% from the field, 36% from the 3-point range, and 81% from the free-throw line. Williams will need to take advantage of Missouri’s freshman big man, Trevon Brazile, to help the Hogs get back in the win column.

After shooting 54% from distance against Georgia a couple of weeks ago, Arkansas has now shot below 30% in each of their last three games, including a 28.6% performance against Alabama. The Hogs also committed 14 turnovers against the Crimson Tide, their most in a game since they committed 14 against Ole Miss on January 26th. This game, however, was the Razorbacks’ fourth consecutive game of winning the turnover battle. Arkansas will need to be better in converting turnovers into points as they close out their regular season schedule, starting with their trip to Missouri on Tuesday night.

Arkansas vs Missouri: What to Watch For

Arkansas has allowed their opponents to shoot better than 40% from the field in only two of their last 10 games, including their recent loss to Alabama over the weekend when the Tide shot 43% from the field. The Razorbacks’ team defense will again be tested by the Tigers’ efficient offensive attack.

ESPN’s BPI gives Arkansas an 82% chance of beating the Missouri Tigers on the road. Arkansas leads the all-time series 31-26, including six wins in their last 10 meetings dating back to January of 2018. Arkansas has won three games in a row, including an overtime victory on the road against No. 10 Missouri in February of 2021. Still, the Hogs are 11-16 all-time when facing the Tigers on the road compared to 18-10 at home and 2-0 on neutral sites.

Arkansas basketball coach Eric Musselman will do well in using the loss to Alabama as a teaching tool for his team. The Razorbacks will set the tone early on the defensive side of the ball and hold Missouri well below their season shooting averages, much like they did in their first meeting when the Tigers shot 29% from the field and 13% from long range. JD Notae will find a way to stay on the court and score upwards of 15 points for the 17th time this season while Jaylin Williams contributes another double-double. Arkansas gets back in the win column to push their season total to 20 wins.