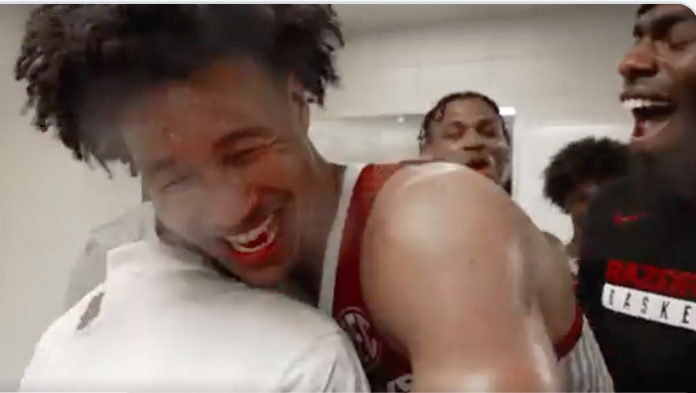 When Razorback sophomore Jaylin Williams chose Arkansas over Auburn, Oklahoma State, UConn, Illinois and others, the comparison to Natural State native big men who came before him came flooding.

The reality was Williams wasn’t like any of those Arkansas preps-produced players. He still isn’t.

As close as he is in age to Gafford, their games were wildly different. Gafford was practically a 7-footer, a skinny rim protector who could grab boards and throw down dunks, but had to develop a jump shot. For the record, he did and is now one of the most underrated centers in the NBA.

Portis was a unicorn for his time, at least when it came to the combination of talent and skill. Position-less basketball was just beginning to take hold in the game and at 6-foot-10, Portis was able to stretch defenses to the 3-point line while still battling and banging in the point as a natural scorer and solid defender.

A few years before Portis, Mike Washington turned himself into a skilled scorer with a modest jump shot in an era where big men who shot the mid-range jumper, a la Dirk Nowtizki, were en vogue. By the time Washington finished his four years, he had put together a solid career and he remains one of the best players during a particularly rough stretch in Arkansas basketball history.

But Williams, Arkansas’ 6-foot-9 point-forward/center brings an element none of them did, yet a touch of what they all did best. And after becoming a fan favorite during his first year on campus in 2020-21, thanks in large part to his work ethic and ability to take charges, the former Fort Smith Northside Grizzlies star is developing into one of the best bigs in the SEC.

A glance at his season stats don’t tell enough of the story. Yes, he averages a decent 7.6 points and an impressive 8.8 rebounds. His 55 assists are second on the team, too, which impresses considering his height. Consider, though, where he was a few weeks ago. Or even last year.

Williams came into his own during SEC play his freshman year, serving as an agile, big body who could defend and move the ball alongside the Hogs’ alpha big, Justin Smith. In 2020-21, William’s season high in field-goal attempts was eight, but he only shot more than four times in five games.

This year started much the same. Williams had eight or more rebounds in six of Arkansas’ first seven games, but his field goal-attempt high was still eight in the first month. He was still doing the dirty work, remained a fan favorite – and a favorite of Arkansas basketball coach Eric Musselman. Arkansas meanwhile, despite its 9-0 start, appeared to be missing something. Things really hit the skids for the Hogs when they lost three of four to Oklahoma, Hofstra and Mississippi State in late January.

But since Arkansas lost to the Bulldogs in a game they were wholly outplayed, they’ve looked and played like a different team. They still lost their next two, to Vanderbilt and Texas A&M, but the bite seemed to come back. They played with a certain edge and je nais se quois. Musselman wasn’t angry in his press conferences against the Commodores and Aggies like he had been in the previous couple weeks, which was quite unlike the affable coach, anyway.

Searching for that change, this author looked toward Williams. The Hogs have since won two in a row, including Saturday’s win over LSU that put the team back in the NCAA Tournament conversation, and Williams is a big reason why. Over his last four games, he’s averaging 10 points, 11 rebounds and two steals a game. He’s shot 17 free throws, contrasted against the 18 he shot in the previous nine games combined. He also attempted seven, seven and eight field goals in his last three games. And, according to HogStats, an unrivaled resource of Arkansas basketball history, Williams has drawn six fouls in Arkansas’ last four games.

Long story short, his offensive game is developing, making Arkansas a much more dangerous and balanced team on that end of the court.

What’s most impressive is that Williams’ increased offensive role hasn’t come to the detriment of his game at the other end, either. He took four charges against LSU and is the active Razorbacks leader with 33 in his career. The next closest players are JD Notae and Chris Lykes. They have eight apiece. Put in statistical terms, he’s more than 400% more effective in charges taken than anybody else on the Arkansas basketball team, which almost certainly has to be a school record (this stat, sadly, isn’t tracked year by year).

On the glass, Arkansas hasn’t had a rebounder with his aggression in more than 35 years. Williams averages 7.2 defensive rebounds per game, tops among all-time Razorbacks since the difference between defensive and offensive boards began being tracked in 1986-87. The next closest player is Washington, who averaged 6.3 in the 2008-09.

One rebound a game over the course of 30 or so games is massive. Williams’ defensive rebounding rate, which is the percentage of defensive rebounds a player gets while he’s on the floor, is above 28. The nation’s leader is Kentucky’s Oscar Tshiebwe at 36. Williams is just outside the top 10 in the country. In other words, every four missed shots an opponent has, Williams is grabbing at least one of them.

Arkansas isn’t out of the woods, though, of course. The Hogs are still 2-3 in SEC play and remain on the outside of most prognosticators’ projected NCAA Tournament brackets. Those who believe in momentum, however, may like what the next two weeks suggests. Arkansas hosts South Carolina and Texas A&M at Bud Walton Arena this week, travels to Ole Miss and hosts West Virginia next and then gets Georgia in Athens and Mississippi State back in BWA after that. The Razorbacks are likely going to be favored to win them all.

And if Williams growth continues, you can almost guarantee he will be a factor every single time.

See the Arkansas baskeball team celebrate after the big win vs LSU: