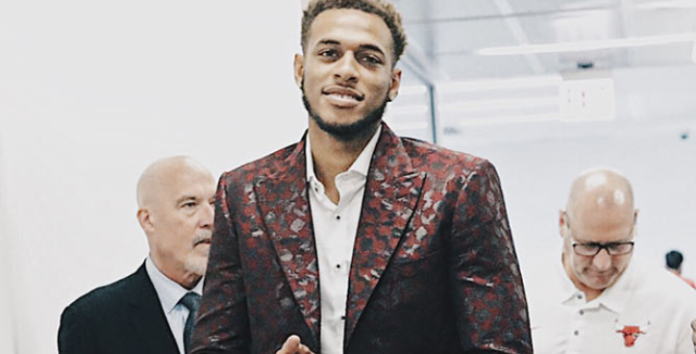 In one way, getting picked by the Chicago Bulls in the 2019 NBA Draft was the start of a new journey for the former star Razorback. It was also the end of another.

Gafford didn’t just battle other jaw-droppingly athletic big men to get to the NBA. He battled himself. The fight began in his hometown of El Dorado as a willowy 6’6” eighth grader, when coaches encouraged him to give basketball a serious effort.

At first, it was very tough. “I didn’t know the game of basketball at all,” Gafford recalled. “I was always the biggest kid out there, but I didn’t know what to do,” he told The Stadium. “I was always running around like a chicken with my head cut off.”

For years, Gafford struggled with confidence. How could he excel when he could barely dribble with his dominant hand? Of course, he wanted to play for the Razorbacks, but that seemed like the longest of shots. And the NBA?

On top of that, Gafford was shy, more comfortable with playing clarinet and bass drum in the Wildcats’ school band. “I used to put myself down a lot in high school. I almost quit basketball.”

But that’s where his people stepped in. Friends and family gave him the support he needed. “They’re all encouraging people. My dad [Wayne Gafford] is the wisest man I know. He helps me out a lot,” Gafford told THV 11’s Dorian Craft. “My mom — she’s more on the crazier side. She has a crazy temper, but she has a more calm side also. And that calm side helps me out a lot.”

As Gafford grew in height, eventually reaching nearly 6’11”, so did his game rise.

Daniel Gafford also wasn’t aware that the Bulls Chairman Jerry Reinsdorf is also chairman of the White Sox. “I haven’t watched a game of baseball at all, so be patient with me,” Gafford, smiling, told the Chicago Tribune.

A natural line of questioning for Gafford was how he felt following in the footsteps of Bobby Portis, the former Arkansas native big man-turned-All-SEC-center-turned-Chicago-Bull-draft pick. Portis, of course, was drafted in the first round of the 2015 NBA Draft.

Years ago, I spoke to Portis about how he learned so much of his game from Corliss Williamson, when Williamson lived in Little Rock and coached AAU basketball.

So it was especially cool to hear from Gafford how Portis, in turn, has influenced him. This insight just goes to show there is a direct lineage from Williamson, the greatest post player in program history (and the most accomplished prep star in state history) to the best native Arkansan big men of the 21st century.

Gafford has already spoken to Portis about what it will take to succeed in Chicago, according to the Chicago Sun-Times.

“Just having somebody like [Portis] on your side, to be able to talk to him . . . it helps you push yourself a lot more,’’ Gafford said. “I used to kind of shape my game after Bobby before I went to Arkansas. I watched one game, and I was a Bobby fan instantly, just like that.

‘‘Just seeing that he gave me somewhat of a shout-out on Twitter basically made me feel good.’’

Bulls coach Jim Boylen added: “His spirit of who he was in the interview, at the pre-draft camp, to where he came in and worked out for us, it was a Bobby-like spirit. Competitive, toughness, take coaching, take correction, learn on the fly. We changed his free throw a little bit when he came in for the workout. He was able to pick it up, things like that.”

Read more about ties between NBA players, Razorbacks and Arkansas native sons in my post below:

The above is a preview segment from upcoming feature on OnlyInArk.com.

The Bulls nabbed Daniel Gafford with the 38th pick of the 2019 NBA Draft. That’s one year after Philadelphia picked someone named Khyri Thomas in the same position.

Is Daniel destined for the same kind of weird-Kyrie spelling anonymity? Or will he become one of the best ever picks in that slot?

Who are some of the best-ever picks at that position — guys he can look to for inspiration? I’ve boldfaced some of the most accomplished ones below:

1989 Doug West, Villanova University – Minnesota Timberwolves (nearly averaged 20 points per game in 1992-1993; the most like Gafford in his ability to terrorize the rim)