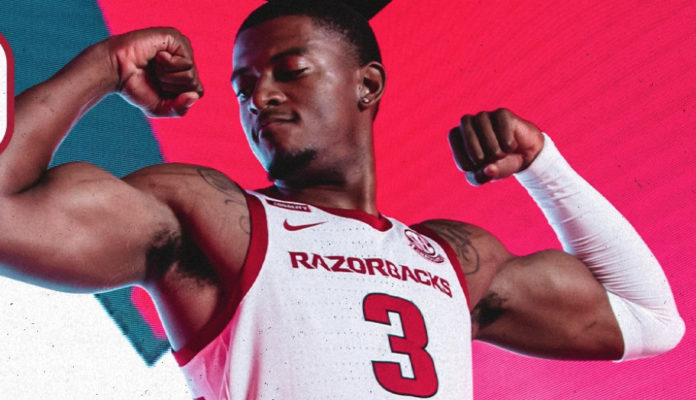 Arkansas finally jumped into the win column in SEC play with a historically dominant 87-43 win over Missouri (7-8, 1-2) at Bud Walton Arena on Wednesday. The Hogs have built considerable momentum in the first half that hopefully carries over to their next game against a different Tiger squad.

This Saturday, Arkansas (11-5, 1-3) takes on the red-hot Tigers of LSU. The Hogs are looking to generate a little sizzle themselves after breaking a three-game losing streak against Missouri in resounding fashion – the second-largest margin of victory in an SEC game behind only a 1993 matchup against Mississippi State. Knocking of LSU will be even harder than, though, since Arkansas has to go into battle without its general in Eric Musselman.

Arkansas’ head basketball coach is out for at least two games after surgery earlier today to repair torn tendons in his left shoulder, an injury that he has been dealing with ever since Trey Wade (6-6, 220lb) accidentally fell on him during practice just before Christmas:

Turns out, Trey Wade might have inadvertently muscled his way into the rotation with that display of strength and effort. He broke out against Missouri, racking up 17 points, 5 rebounds, 3 steals and 2 blocks.

LSU, on the other hand, is rolling through the early part of their season. The Tigers currently sit at 15-1, 3-1 in SEC play, their best start in 20 years. They are currently ranked 3rd in the NET rankings, giving them the highest NET ranking in the SEC. For what it’s worth, Arkansas bounced from 98th up to 83rd after their dominating performance against Mizzou, but they’re still a far cry from the Top 25. LSU’s only loss this season came on the road against a tough Auburn squad currently ranked 6th in the NET rankings.

What to Expect When LSU Has the Ball

LSU is a long, versatile team, led by a familiar face in senior forward Darius Days. The 6-7 forward looks to take the court against the Hogs for the eighth time in his career. To date, he has a career-winning record against the Hogs at 4-3 over three seasons. He does, however, tend to play less efficiently against Arkansas than his career numbers might indicate. Days’ career shooting averages are 49% FG, 36% 3P, and 74% FT shooting. Against Arkansas, those numbers drop to 46% FG, 22% 3P, and 50% FT shooting.

It’s more than likely that graduate transfer Trey Wade will draw Days as his primary defensive assignment. After effectively limiting Missouri’s leading scorer, Kobe Brown, to only six points on Wednesday night, Musselman had high praise for his 6-6 forward’s defensive capabilities, saying “He’s an active defender who can guard, really, probably all five positions. Trey has a unique ability to block shots and also contain dribble drives, and he has quick hands as well. He’s our best box-out player, boxing guys off of the offensive boards.”

Missouri would have been an entirely different team had they been able to hold onto former point guard, Xavier  Pinson, who averaged nearly 14 points and 3 assists per game during his last season with the Tigers. Instead, the 6-2 guard seriously considered the Hogs when he entered the transfer portal before ultimately joining LSU – though we hope it wasn’t as easy of a decision as another soon-to-be-Tiger that Hog fans know all too well.

Regardless, Pinson is averaging nearly five assists per game with his new team, though he sat out their last game against Florida due to an MCL strain. There’s a chance that he could still be inactive when the Hogs come to town.

LSU’s leading scorer is a sophomore transfer from Clemson by the name of Tari Eason. This 6-8 forward is averaging 15.5 PPG on 53% shooting off the bench for LSU after averaging only 7.3 PPG as a freshman at Clemson. His instant offense off the bench will be a key point for the Hogs, especially if they get off to another slow start as they have in too many games this season.

In their last 46 minutes and 33 seconds of game time, including the closing minutes of the loss to Texas A&M, the Hogs have outscored their opponents by a score of 124 – 69, a 55-point margin. Though they lost to the Aggies, their furious run late in the game looked like a potential turning point in the season. The dominating win over Missouri did nothing to disprove that theory.

In fact, for the first time since their 93-80 victory over Northern Iowa on November 17th, the Hogs had at least twice as many assists as they had turnovers. It had been a full 12 straight games in which Arkansas failed to accomplish that. Arkansas’ 18 team assists against Missouri was the 4th highest assist total of the season, and their 8 turnovers tied for the 2nd lowest mark of the season behind only the aforementioned game against UNI.

After an impressive outing, the Razorbacks’ ability to take care of the ball will once again be tested by an impressive LSU defense. They rank 1st in the nation in steals per game at 12.1 and 6th in the nation in lowest opponent 3-point percentage. This will be a daunting task, to say the least, for a Hogs squad that has struggled with turnovers and long-range shooting all season.

The true turning point in the Missouri game, however, seemed to come thanks to another change to the rotation. Arkansas basketball coach  Eric Musselman decided to go with an unconventional starting lineup against the Tigers, starting four players typically thought of as forwards alongside guard JD Notae: Au’Diese Toney (6-6), Trey Wade (6-6), Kamani Johnson (6-9), and Jaylin Williams (6-10). This supersized lineup was the first time those five Razorbacks had played together all season, and may have raised a few eyebrows pregame — but not nearly as many as it raised when the Hogs jumped out to a 26-3 lead just over nine minutes into the game.

The effort and energy brought to the court by the trio of Wade, Johnson, and Williams made it impossible for Mizzou to get anything going offensively. It also allowed for JD Notae to be the clear focal point of the offense, which he took full advantage of by maneuvering pick-and-rolls to find open shots for himself and his teammates. Notae finished the game with 19 points, 2 assists, and 0 turnovers, his first time having at least one assist with no turnovers all season.

Arkansas vs LSU: What to Watch For

A few of the biggest questions revolve around Trey Wade’s performance. It’s hard to know for sure what caused Wade this long to go off. He was previously averaging 1.8 PPG in roughly 8.7 MPG before his standout performance against Missouri. It’s also hard to blame anyone for playing Au’Diese Toney and Stanley Umude at the forward positions for most of the season after they scored 15+ and 20+ PPG, respectively, last season.

Regardless of the past, it’s clear that Wade’s defensive versatility should be leaned on much more heavily as the Hogs dive deeper into SEC play, starting this Saturday against an LSU basketball team with a dynamic forward duo.

The other major factor is Musselman’s absence. The 3rd year Head Hog had surgery on his shoulder Thursday morning, and though it reportedly went well, Musselman is expected to be sidelined for at least two games while assistant coach Keith Smart strolls the sideline as interim coach. Smart, a former NBA head coach like Musselman, is a Baton Rouge native, went to McKinley High School and still has his mother and other family members in the area.

It’s hard to project what effect that Musselman’s absence will have.

There isn’t much precedent. Musselman did miss the home game against Abilene Christian early last season due to Covid-19 Protocols. Arkansas didn’t miss a beat in that game, hitting their exact season average in assists, coming extremely close to their season average in points and turnovers, and exceeding their average 3-point percentage as a team. The Hogs won that game 85-72 despite not having Musselman available on the sidelines as David Patrick (now with the Sooners) served as interim coach.

It should also be noted that the Hogs played without Musselman’s guidance for the last 3:30 of the game against Oklahoma this season. They let a 15-point deficit at the time of his ejection grow to a 22-point deficit in that span. However, coming into a game knowing the head coach will be absent is quite different than trying to make due on the fly in a game the team was already losing, so that shouldn’t be indicative of Arkansas’ next two games.

With Arkansas seemingly turning a corner in their season, this game could go either way. Wade’s defense will make a difference and become contagious, but the Hogs will struggle to shoot from the field. In two games in Baton Rouge under Musselman, the Hogs have averaged shooting 39% from the field and 29% from behind the 3-point line – they lost both games. Though ESPN’s BPI gives LSU an 88% chance to win, the Razorbacks will keep it close thanks to their defense, but ultimately drop another SEC contest due to lack of scoring.

How to Watch Arkansas vs LSU