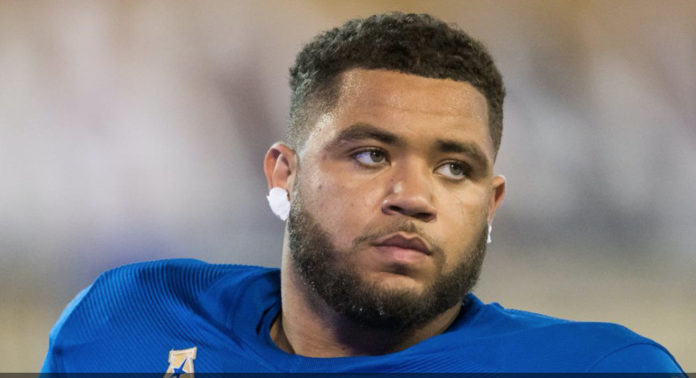 There is no shortage of big-time colleges who could use Jaxon Player’s services.

The former Tulsa defensive tackle was a standout for the Golden Hurricane, nabbing all-conference honors the last two years and grading out as the fourth-best interior defensive lineman in 2021 according to Pro Football Football. In 2020 and 2021 alone, he racked up 23.5 tackles for loss and 8 sacks.

For a week or so, the 22-year-old considered entering the 2022 NFL Draft. “When the season was done one of my options was to enter the draft,” the Waco, Texas native told the Tulsa World’s Guerin Emig. “I was waiting to see if I was going to get any invites to Senior Bowls or anything,” Player said. “After about a week I didn’t have any calls and I decided maybe I should play another year in college. After talking with my family that was the decision I came to.”

So, the tackle entered into the transfer portal and has since named Arkansas, Baylor, Oklahoma, Oklahoma State and TCU as finalists for his next college destination.

Better competition is one of the main reasons John Ridgeway, the former Illinois State standout, chose to transfer to the Razorbacks before the 2021 season. Ridgeway proved to be Arkansas’ best run stoppers throughout the year, and many Arkansas football fans hope Jaxon Player will become a similarly devastating force for the Hogs in 2022.

Pig Trail Nation’s Otis Kirk compared the 6’0″, 294-pound nose guard with the 6’6″, 320-pound Ridgeway, who has since declared for the 2022 NFL Draft. Player, Kirk said on Sunday, is “good against the run. But I wouldn’t think he’s quite as good as Ridgeway… but he’s a better pass rusher than John was.” (Ridgeway, who was often double teamed, had 2 sacks and 4 tackles for loss in 2021.)

“John wasn’t bad against the pass, but this kid’s probably a little bit better pass rusher. He had [five] sacks over at Tulsa this year. I think [at Arkansas] you would give him a little bit more in that, but a good player. Arkansas’ got four schools they’re to beat. My gut tells me it’s going to come down to Arkansas and Baylor for him.”

Things have changed, however, in the five days since Kirk’s breakdown. Apparently, they have changed in Arkansas’ favor.

This afternoon, Jaxon Player was scheduled to arrive for an official visit to the U of A Fayetteville campus for a visit with Arkansas football coaches and players, according to Razorback recruiting reporter Richard Davenport. Player has already visited TCU and wrapped up a visit with Baylor earlier this week.

Baylor does make sense on a few levels, given Player attended Midway High in Waco and Baylor football coach Dave Aranda is building one of the most impressive defenses in the nation. If Player puts a premium on returning home, as former Hogs Joe Foucha and Greg Brooks Jr did, then Baylor would be the the clear choice.

But note that he in the aforementioned Tulsa World quote, Player was very careful to talk about “potentially” going home and then made sure to throw in what he was looking for “if not closer to home.” Yes, the Big 12 is a big step up from the American Athletic Association. In the Tulsa World interview, Player mentioned that all the schools have made impressive recruiting pitches.

“I’ve got a pretty clear process of what I’m looking for in a school and what feels like home for me,” he said. “It’s going to be hard because every school offers something different. Every school is better in one aspect or another.”

But if consistently great competition is what he wants, then Arkansas is the best choice. No conference offers him a better chance to play against elite competition week in and week out than the SEC.

Just as Barry Odom’s familiarity with former Arkansas defensive linemen Tre Williams and Markell Utsey helped bring them over in 2021, so could the same dynamic play out with Ashley and Player. The departure of Utsey and Ridgeway also open up a starting position and plenty of snaps for Player to produce plenty of tape for Senior Bowl executives and NFL scouts, whereas Baylor’s defensive line returns a lot more depth from 2021 compared to Arkansas’.

“He’s comfortable with Jamil,” Kirk said on Sunday. Arkansas has got some advantages here. Obviously, if the kid wants to go home, he’s going to go home, and there’s nothing you can do about it. But otherwise, I think Arkansas holds a lot of advantages.”

On Friday, however, Kirk strongly hinted that Player is Arkansas-bound.

Referring to both Player and Arkansas recruit Kaleb James, “it appears very likely Jermial Ashley is wearing a big smile on Tuesday after getting good news from both these talented linemen,” Kirk wrote for Pig Trail Nation.

Player is set to announce his decision on Sunday, while James is set to announce on Tuesday.  Kaleb James, a four-star defensive end out of Mansfield, Texas, did his best T.J. Watt impressing in his senior year, finishing with 105 tackles, 61 solo, 20 tackles for loss, 10 sacks, 36 quarterback hurries, two forced fumbles and five recovered ones.

More on Jaxon Player and the state of Arkansas football transfers below: