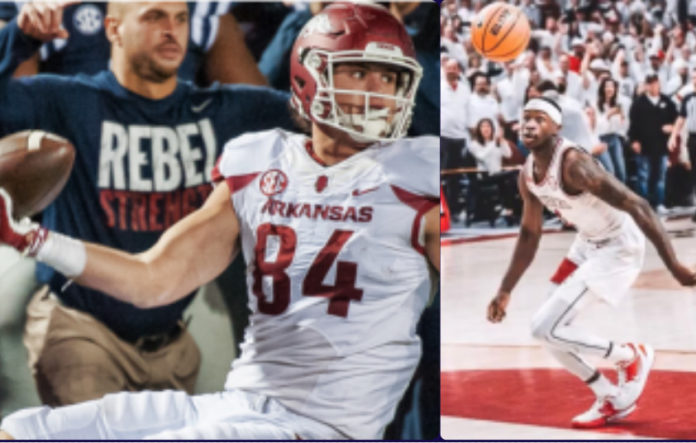 Tuesday night’s win against #1 Auburn marked the second definitive turn-around for a major Arkansas sport this year (the other being the Jan 1 bowl win over Penn State). It announced Arkansas as legit contenders in all three major sports, and boy did it feel good!

Unfortunately, that feeling didn’t last through Saturday. While the Razorbacks made a valiant late-game comeback on the road against Alabama, they ultimately fell by a point to the Crimson Tide. Even still, some afterglow from Tuesday’s win remains. It’s time to enshrine that memory – put it behind glass and hang it on a wall so we can revisit it as often as we like. For me, enshrining such a memory means putting it in its place in a way all sports fans understand: rankings.

Against Auburn, Bud Walton was rocking. Even on a court known for its home crowds, the Arkansas vs Auburn game was a standout. But where does it, and specifically the cherry on top Davis served up at the end, fall among the best moments in Razorback sports history?

I spent a day talking to Razorback fans, both young and old, to get some perspective. It’s easy to call the thing that just happened “The Best Ever.” We’re all prone to recency bias. So, I started listing all the “great Razorback moments” over the years, found Youtube clips for many, and started laying them out chronologically to get a better understanding of each.

There are many ways to think about these moments and a lot of years to cover. So, here are the rules, disclaimers, and side notes:

Without further adieu, here are The Top 10 Best Razorback Moments:

Duke’s defense was smothering the Hogs as the Razorbacks passed the ball, searching for an open shot. Scotty Thurman found himself with the ball on the wing. Time was expiring on the shot clock, and a Duke defender was in his face. He pulled up, and his rainbow three splashed through the net as the shot clock buzzer screamed.

The Hogs defeat Duke 76-72 to win their first and only National Title in Basketball. President Bill Clinton was in attendance.

Sometimes it’s not a play. Sometimes, a moment is captured a smidge later.

The Razorbacks traveled to Baton Rouge to take on #1 LSU. Darren McFadden was sensational, rushing for three touchdowns and throwing for another to help Arkansas beat LSU 50-48 in 3OT.

The sideline reporter was interviewing Coach Houston Nutt when DMac drops in. It was a special moment for coach, player, and all of Razorback nation. My words won’t do it justice, so check it out.

After struggling early in the year, the Hogs won 5 straight and were coming into the game at War Memorial with the SEC West title at stake.

This was, without a doubt, the craziest play I’ve ever seen during a Razorback football game. And one that became even more significant because it allowed Alabama (who’d lost to Ole Miss in Week 3) to advance to the SEC Championship, which they won, allowing them to advance to the CFB Playoffs, which they also won. “You’re welcome, Bama… still.”

Anyway, it was, I dunno, our 82nd overtime against Ole Miss in the last 10 years. Down 7, 4th and 25, midfield. Brandon Allen passes to Henry who laterals to Alex Collins who… You know the play. Click the link.

This is perhaps a recency bias pick, but for good reason. Everybody I talked to 40 years or younger mentioned this play.  It turned out to not be the greatest season. Hog’s went 10-8 in SEC play, finishing 5th and got bounced from the NCAA tourney in the second round.

But at the time, there was excitement around the men’s basketball program. Well into a rebuild in Mike Anderson’s 3rd season, we had a star freshman by the name of Bobby Portis, and Michael Qualls was a walking highlight reel.

Coming off a devastating loss at home in overtime to the #10 Gators, the Hogs found themselves in the same spot three days later – in overtime, at home – this time against  #13 Kentucky.

With 11 seconds left, Kentucky hit a 3 pointer to tie it at 85. The Hogs quickly brought the call up the court, Rashad Madden bricked a 3-pointer, but Michael “#MrSCTop10” Qualls skyed over Julius Randle and two more Kentucky defenders for a putback dunk with 00.2 seconds on the clock to win.

Qualls made Sportscenter’s Top 10 for the 4th time that season.

All year, dude had been coming in, droppin bombs in the clutch. Crowd’s chanting, “9 Balls, 9 Balls,” reminding Nebraska’s pitchers of how many balls in a row they’d thrown. A passed ball allowed a runner to score, giving us a 3-2 lead in the bottom of the 8th. On the next pitch, Welch hit a ball that’s scheduled to leave the solar system in the near future.

Hogs won 6-2 to advance to the Super Regionals.

It was revenge, plain and simple. That’s what this game was about for Clint Stoerner and the Razorbacks.

The year before, during Houston Nutt’s first season as head coach, undefeated Arknasas met undefeated Tennessee at Neyland Stadium, which was packed with 106,000 screaming Vols fans. The Hogs lost that game 28-24 when Stoerner fumbled the ball in a play now known in some maliciously cheeky circles as “The Stoernover.” The Vols continued their undefeated streak and took home a Natty. The Hog’s season fell apart, and we lost 3 of the last 4.

Arkansas football’s struggles continued somewhat in ‘99, and we limped into our matchup with #3 Tennessee at 5-3.

But Razorbacks remember. Down 24-21 with less than 4-minutes left in the 4th, Stoerner connected with Anthony Lucas on a long touchdown pass to take the lead. Hogs came away with a 28-24 win over the defending national champs.

After a surprising trip to the Elite 8 last year, expectations have been high. Maybe too high, considering the Arkansas basketball program lost NBA-lottery-caliber talent Moses Moody to the draft. It’s been all peaks and valleys so far. After winning our first 9 games of the season, we lost 5 of 6.

But coming into the game against #1 Auburn, the Razorbacks were on an 8-game win streak. Strangely, the Razorbacks had never hosted the #1 team in the country in Bud Walton. The table was set.

Then the Auburn team decided to dance on the Razorback logo at half-court. Insert Michael Jordan meme. It was taken personally.

Sometimes it’s a couple of moments smashed together, then amplified by years of bitter rivalry and a date to remember – January 1, 2000. Y2K.

#24 Arkansas (The same Stoerner team to knock off #4 Tenn earlier in the season) was headed to the Cotton Bowl to face #14 Texas for the first time since leaving the SWC 9 years earlier.

The game turned on 3rd and 12 from our own 1-yard line when Stoerner connected with Anthony Lucas on a deep ball to put the Hogs at mid-field. Stoerner later dodged a defender and delivered the ball to RB Cedric Cobbs for a touchdown.

Minutes later, Texas was 1st and goal from the Hogs 1, but were held to a field goal. The Razorbacks proceeded to gash Texas on the ground and through the air, while our defense delivered an 8-sack performance, holding Texas to 27 rushing yards. And proving once again that, no, very few things are bigger in Texas.

Bobby Petrino’s debut season. Bayou Bengals, the defending National Champs, were in Little Rock and figured to notch an easy conference win against a rebuilding rival. The Hogs were 4-7 coming into the game, but had shown some signs of turnaround in the second half of the season.

This one made the list because it was a pivotal moment for the Petrino Era. Knocking off LSU that year helped The Petrino Brothers pull in a nice haul of recruits by Arkansas standards. Adding Ronnie Wingo Jr., Knile Davis, and Cobi Hamilton to a lineup that already featured Ryan Mallett (who was sitting out that season due to transfer rules), Joe Adams, Jarius Wright, Greg Childs, and Chris Gragg. The Hogs were 29-10 over the next three seasons, notching 2 bowl wins and a Sugar Bowl appearance.

It also delivered the best Arkansas football season in recent memory, going 11-2, winning the Cotton Bowl and ending up Ranked 5th in the country during the 2011-2012 season. Our only two losses that year were to the eventual BCS National Championship participants – LSU and Alabama.

Shout out to Arkansas Women’s Basketball, who knocked off UCONN last year. Huge moment for that program, which deserves recognition. As do plenty of other nationally elite programs, like soccer, softball and track and field. No doubt there, there are plenty of non-football, basketball and baseball moments that are deserving. So, maybe a follow-up article highlighting those is due. Or, for those of you who like to wallow in misery, Top 10 Worst Arkansas Sports moments… Gotta remember the pain to enjoy the highs!

Note: The headline has been updated from a previous version mentioning Devo Davis’ dunk.