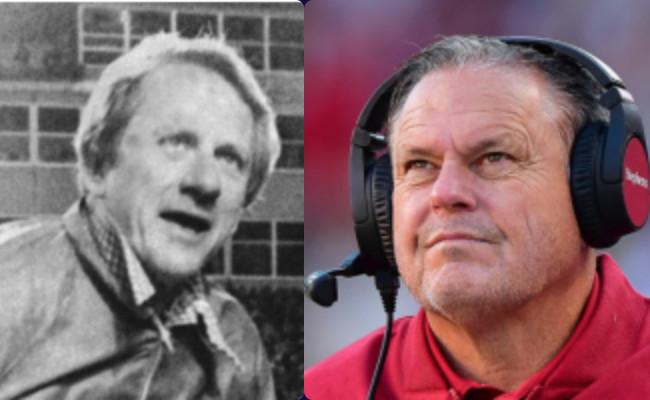 Broyles did not.  He epitomized and popularized the Chairman of the Board approach to head coaching. Broyles didn’t coordinate either side of the ball and was famed for letting his coaches coach. Yet he was most definitely in charge, thoroughly involved in both sides of the ball, special teams and recruiting.

Sam Pittman and All Those Pies

Old offensive line coach Pittman, first earning his Arkansas reputation to be hired as head coach by coaching Bielema’s offensive lines from 2013-2015 before his nationally recognized 2016-2020 tenure coaching Kirby Smart’s Georgia offensive lines, also keeps his fingers in all of the pies.

Barry Odom, his defensive coordinator and fellow Oklahoma native, once essentially said that while outsiders usually see Sam Pittman as a down home, good old boy, he can become a hard-edged prosecutor exacting staff meeting answers to situations he asserts need addressing.

Especially recruiting.  Those leaving no recruiting stone unturned tend to be turned away.

Even Rion Rhoades, one of Pittman’s alums from his head coaching days at Hutchinson (Kan.) Junior College who did a good job coaching Grant Morgan and the 2020 Razorbacks linebackers, didn’t have the red carpet laid out for a return to the 2021 staff and left coaching for private business.

Recruiting apparently figured in the departure as it did for the 2020 tight ends coach not retained.

Some past Razorbacks coordinators hardly recruited at all.

Not the case under Pittman. Odom, the former Missouri head coach, and Kendal Briles, the talented, young offensive coordinator and likely somebody’s near future head coach, don’t just game-plan and evaluate what’s on hand but also roll up their recruiting sleeves.

While not necessarily meshing for everybody, Pittman’s staffs on the whole have meshed spectacularly.

Under the circumstances those staffs rank right up with the great Frank Broyles’ staffs.  And those were some great ones.

As grad assistants Holtz had Pete Carroll, the eventual national champion/Super Bowl champion coach of the University of Southern California and the Seattle Seahawks, and eventual Kent State head coach Pete Cordelli (Admittedly, Cordelli wasn’t so hot as a head coach, tallying an overall record of 3-30.)

Few had Broyles’ ability, in part because so many of his assistants advanced to better jobs, of somehow improving staffs even as icons departed.

Pittman hasn’t been so thoroughly tested yet but he’s off to a good start.

Later while coaching North Carolina’s offensive line, Pittman had Davis as his graduate assistant. Davis was Missouri’s offensive line coach for Odom and accompanied Odom from Mizzou to Arkansas. Davis did a nice job with an offensive line that had enjoyed little previous success.

But when LSU called him home to Baton Rouge with a multi-year contract far above what he was getting at Arkansas he answered the call. Davis is still there though Ed Orgeron, the coach who hired him, is not.

For tight ends coach he hired Dowell Loggains, the Arkansas football walk-on quarterback and holder for placekicks for Nutt’s 2000-2004 Razorbacks followed by 16 years coaching in the NFL.

Good coach that he is, Davis would be hard put to coach the O-line any better than Kennedy, Arkansas’ nominee for the Broyles Award annually voted to the nation’s best assistant football coach.

Kennedy’s Arkansas linemen sing his praises.  It’s evocative of the Bielema era, when Pittman’s Razorbacks offensive linemen sang his praises. Five years after Pittman had gone to Georgia, some of those same players lobbied Arkansas Athletic Director Hunter Yurachek to hire him as Arkansas’ head coach.

A valid criticism of Pittman’s first Arkansas staff was it not containing a full-timer Arkansas connected by birth or as a former Razorback.

Newport born/UA alum and letterman Loggains not only provided that Arkansas connection avidly recruiting for a position that was fortunate to have former walk-on Blake Kern emerge these past two seasons, but lends the staff 16 years of NFL experience including seven as an offensive coordinator.

While recruiting in Georgia for Georgia, Pittman was impressed with 2-time Georgia High School Coach of the Year Jimmy Smith who then became the running backs coach for the Georgia State team successfully running the ball to upset Tennessee.

Smith was supposed to start off easy in 2020 inheriting All-SEC 1,000-yard rusher Rakeem Boyd. However Boyd got injured right out of the gate and produced just one 100-yard rushing game before the injuries shut him down entirely.

With Johnson, Smith and Green returning and touted Smith recruits added to the mix the Razorbacks were able to wish Smith well, understanding his decision to transfer to TCU was for a shot at more playing time.

The upcoming spring and August preseason practices will be key to what Guiton develops though there are already encouraging results with Arkansas minus Burks while defeating Penn State in the Outback Bowl.

Given that the Morris regime couldn’t establish a quarterback though ones he had would star upon transferring elsewhere, quarterbacks coach/offensive coordinator Briles worked wonders blending 2020 graduate transfer Feleipe Franks with his new Arkansas system and then in 2021 coaching Morris era holdover KJ Jefferson into among the best quarterbacks in a league sporting the Heisman Trophy winner plus another quarterback receiving Heisman votes.

Briles incrementally installed the uptempo “Hammer Down” offense that Morris espoused but never produced. It instantly affected the pace of the game.

On defense Odom has been the constant Pittman has pressed the administration to keep raising his pay to ward off so many seeking his services. Missouri’s head coach from 2016-2020 and Pittman’s walking partner as Pittman proceeded and succeeded losing weight since returning to Arkansas,  Odom has been a solid, sounding board for the first-time head coach.

His defenses for the most part mark a huge improvement over the defensive disasters marking the Morris 2018 and 2019 campaigns.

Odom specifically coaches the secondary. He is joined by a new cornerbacks coach, Dominique Bowman, hired recently away from Marshall University.

Morgan and Henry completed their eligibility.  So we’ll see what Scherer has developed aside from Pool returning as a bonus senior. No doubt, it helps that he has Alabama transfer Drew Sanders, a former overall No. 1 recruit out of Texas, to help out.

Going on three different defensive line coaches starting Pittman’s third year, the D-line is the one coaching spot that Pittman hasn’t established to his satisfaction.

Deke Adams, a plus 20-years coaching veteran adding experience to a mostly young staff and with  a SEC coaching and recruiting past in stops at Ole Miss, Mississippi State and South Carolina, gets his turn to establish stability at the one spot with annual turnover during the Pittman regime.

The fact was a lot of special teams broke down everywhere during that COVID-racked season when a Wednesday third-team special teamer suddenly started on Saturday special teams because the two ahead of him tested COVID-positive or had to fill other roles because COVID had thinned the ranks.

By the 2021 season’s end, especially with the place-kicking by Fountain recruited freshman kicker Cam Little, 20 of 24 field goals, and punting and trick play running and passing from now senior punter Reid Bauer, special teams had become an Arkansas strength.

All around, they’ve proven well-rounded staffs who have helped the Razorbacks round a corner that looked light years from turning just two years ago.