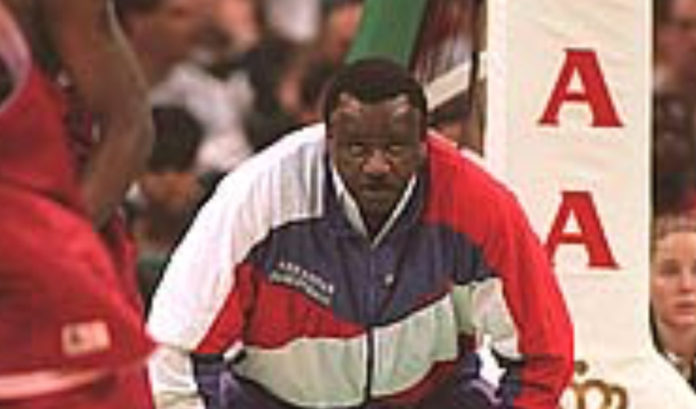 We’re two decades removed from the Nolan Richardson era, stunningly, but Eric Musselman keeps finding ways to affirm his legendary predecessor’s legacy while building his own. With the Arkansas basketball program coming in today at No. 14 in the AP poll, this marks the 14th week that Arkansas has been ranked in the last two years. That surpasses the number of times it was ranked during the previous 19 seasons combined (13 weeks).

This recent stretch of 13 wins in 14 games gave us the program’s first-ever takedown of a No. 1-ranked team in Fayetteville, though the Auburn game admittedly didn’t win aesthetic points. In that one, Arkansas overcame a massive rebounding disadvantage and poor shooting to snatch an 80-76 overtime thriller that finished in scintillating fashion.

In beating the likes of Georgia and Missouri, the Hogs looked crisp. They were businesslike, doing what Coach Richardson’s best teams routinely did in vanquishing lesser league teams from the jump.

The latest, greatest reminders of the old coach? First, Arkansas went down to Florida and played arguably its most complete game of the year in a place it simply never performs. The 82-74 win at the O’Connell Center was by no means easy, but it was the Hogs’ first there since Richardson’s national runner-up squad won in 1995.

Then, despite likely national Player of the Year Oscar Tshiebwe steamrolling his way to 30 and 18, the Hogs scraped by No. 6 Kentucky 75-73 on Saturday in ever-throaty Bud Walton Arena. J.D. Notae’s 30-point, eight-dish masterpiece and Jaylin Williams’ 15th double-double keyed the latest thriller against the Wildcats.

On a Saturday that saw the top six teams fall, Arkansas stood out as the hottest squad in the land. And the Hogs are flashing that inimitable swagger that we privileged elder fans recognize immediately.

The Return of the Road Warrior Mentality

What would make Richardson proudest of the current iteration of the Hogs? It’s hard to pick one element.

The defensive turnaround authored by Musselman and staff is the most imminent answer, and it’s traveled well, too. Florida swished seven threes in the first half, though, seemingly buoyed by its own upset of Auburn three nights beforehand.

Teams sprang from the gates early against the Hogs in a trio of SEC losses a season ago (Missouri, Alabama, and LSU), and Arkansas couldn’t muster a recovery.

Second-half tenacity, though, again shifted the balance. Florida’s shooters took enormous heat from Notae and Stanley Umude in particular after halftime, leading to a 1-for-9 three-point showing for the Gators.

And as the Hogs disrupted Florida’s vibe, they maintained an assured grip of the game offensively. Hungry to shake off a foul-addled first half of the Tennessee win, Notae attacked, but with discretion, and received the type of balanced supporting scoring Richardson teams regularly enjoyed.

How disappointing it must’ve been for an emotionally charged Gator team to enter the halftime tunnel in a three-point hole. Arkansas just played composed, responsible basketball for 40 minutes to take care of business.

Razorback basketball boasted the already-feverish Barnhill Arena for the first years of Richardson’s tenure; when Bud Walton Arena opened in 1993 and accommodated twice the din of its predecessor, Barnhill, the dividends came immediately with the 1994 title.

The new wore off, and then so did the buzz for a while. Stan Heath, John Pelphrey, and Mike Anderson all had moments where the Palace recaptured lost energy, but not often enough.

Yes, it takes a successful team to draw fans, but Richardson’s teams made the influx extreme. Naturally, we consumed that tempo and tenacity, but traditionalists loved the defense-first principles.

I took my oldest son, then around six, to his first Bud Walton game on a chilly Saturday night in Anderson’s first year. We hosted a pedestrian Vanderbilt team and dispensed with them. Entrenched in that rebuilding phase for a bit, the Hogs surprised me by drawing a fairly healthy crowd for that one. But I found myself boring a five-year-old with Arkansas basketball stories that night about just how wild it could get.

And even bearing optimism for Anderson, I still doubted BWA would ever consistently push decibel envelopes again. Musselman’s brand and passion, infused into players who clearly absorb and effuse it quickly, resolved my doubt.

And as for That Arkansas Basketball Disrespect Card…

Richardson loved nothing more than reprocessing perceived disrespect into fury. When the pollsters or pundits waxed skeptical, he snipped back, and as you see below he made powerful statements even without words:

He wasn’t one to grouse over postseason projections, though. In the eyes of Nolan Richardson, frankly, those other people simply didn’t matter at all, whether they voted in a poll or dabbled in NCAA tourney bracket voodoo. It was his team and his coaches against the world, all the time, and it worked.

Musselman, meanwhile, doesn’t force that hand, but he manipulates it subtly.

For now, the nemesis will be the NET rankings, since John Calipari’s been ably clowned. Arkansas’s 23-6, 12-4 marks and scalding recent play merit it a tie with Houston at No. 14 in the AP poll, but somehow hardly budged the needle much on the NET. There, Arkansas somehow remains at No. 23, one behind Alabama (19-10) besides having a much better record.

In that case, at least Bama has the head-to-head win. Even more inconceivably, Arkansas is seven spots behind LSU (20-9) despite a much better record and having won at LSU. We’ll see if Arkansas can make the metrics right in Wednesday night’s Arkansas vs LSU tilt in Fayetteville.

Arkansas, apparently, is paying a heavy price for that December loss to Hofstra in North Little Rock. That loss shouldn’t be a sin anymore, NET or otherwise, as Hofstra is a respectable 20-win team. Arkansas isn’t the same team now as then, and is in fact, 4-0 against the Top 25.

Let the doubters doubt, then. Richardson converted that into motivational fuel, and Musselman’s doing it his way now.

And if you want proof that his way is working, beyond the box scores? Watch this pitiful display by the losing coach John Calipari who can’t bother, in 11 minutes, to credit the victor or justify a walk-off in the remaining seconds.

I’d rather have the shirtless little dude in the sling any day, thanks.

Arkansas has beaten a projected No. 1 seed (Auburn) and No. 2 seed (Kentucky) in recent weeks. But the past still haunts these Hogs: five losses at the end of non-conference and the start of conference play mean Arkansas almost certainly won’t surpass the No. 3 seed that last year’s team earned going into the NCAA Tournament.

Currently, with two regular season games remaining, Arkansas is a projected No. 4 seed.

Kentucky were the second favorites to take home the championship this year at odds of +880, just behind the Gonzaga Bulldogs at +440. Tennessee is also given a better chance of doing well in NCAA March Madness, with odds of +4700, with LSU tied on +8000 with the Razorbacks. But odds mean nothing, on that day, any team can win. As proven when Arkansas beat Kentucky on Saturday 75-73.

The Razorbacks are still hitting high gear and have a great record, especially compared to LSU at 20-9 and Tennessee at 21-7. Only time will tell though how it all unfolds, though.